On a crisp early-October day, Sara Granstrom knelt over a blackboard at Lincoln Peak Vineyard in New Haven writing instructions for the winery's community harvest day. A few minutes later, a dozen people gathered around her in the 12-acre vineyard for a quick briefing that included a warning not to snip their fingers while clipping off bunches of grapes.

The grape variety ready for harvest, Granstrom explained, was la crescent, a cold-climate hybrid that is featured in several Lincoln Peak wines. As thanks for their help, pickers would get to taste fresh-pressed grape juice, as well as some yeasty, lightly fizzy juice a few days into the winemaking process.

Kathryn Marshall of Brandon brought two friends along. "I had been here for tastings and concerts but never picked before," she said. "I thought it would be a fun way to learn more about wine."

Over a few hours, about 40 people clipped their way through the leafy rows, filling large yellow tubs known as lugs with almost 4,000 pounds of grapes. It was a small but meaningful contribution to the season's total 72,140-pound harvest, and it had value beyond its weight.

"Part of our business is, by necessity, educating people," Granstrom said.

Her father, Chris Granstrom, planted the family's first grapevines in New Haven in 2001. This year marks a decade of bottling wine under their own label.

By various measures, Lincoln Peak has achieved success, earning dozens of medals for its wines, including a Winery of the Year award in the 2016 International Cold Climate Wine Competition. In 2008, it opened a tasting room that receives roughly 9,000 visitors annually.

"Our business is stable. We're profitable," Chris said. While 32-year-old Sara has not yet committed to taking over the family business, she has established herself as a respected second-generation Vermont vintner.

Yet Vermont wines and northern-hardy grape varietals such as la crescent and marquette can still be a hard sell to consumers who just want chardonnay or pinot noir.

"They're funky varietals from a funky place where people don't necessarily expect good wine to come from," said Alex Moran, beverage director and sommelier for Burlington's Farmhouse Group and a 14-year veteran of Vermont's restaurant and beverage industry. Pricing of small-production Vermont wines can be a challenge, he noted, especially relative to what diners are willing to pay for something they've never heard of.

Nonetheless, Moran said of Vermont wine, "Things have changed tremendously over the last decade since it started as more of a novelty thing." He recently added two of Lincoln Peak's wines to his by-the-glass list at the Farmhouse Tap & Grill in Burlington, where they sell briskly, he noted. "I would never put a wine on [the list] just because it's [from] Vermont," Moran said. "It has to be quality."

In the case of the marquette, it probably helps that he doesn't have a pinot noir on the glass list. When people ask for one, Moran said, he suggests, "We don't have a pinot, but we have this Vermont varietal from just down the road; it's kind of like pinot noir meets syrah."

The learning curve is not just on the consumer side, Moran noted. "It's been great to see the development, the mind-set change from the winemakers," he continued. "Vermont wine back in the day, they were trying to force it, trying to be California. Winemakers are still trying to figure out how to work with hybrid varietals, but, over the last five years, instead of forcing it, they're letting it do its thing. These varietals are fresher and lighter, Alpine style. They reflect our landscape." 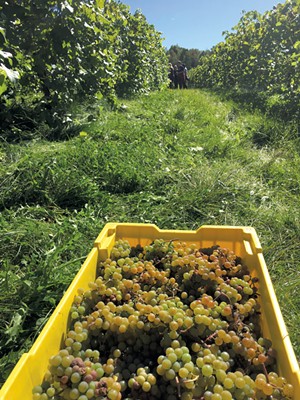 The intimate connection between wine and the soil and climate where the grapes are grown presents a challenge to Vermont winemakers like Lincoln Peak, especially when it comes to the inevitable comparison with the state's booming craft breweries.

"With beer, the ingredients can come from any place," Chris Granstrom explained. "Wine traditionally is made with grapes grown in the area; it's linked to the local climate, landscape and growing conditions, what the French call the terroir. It's an entirely different business model than a brewery."

While some Vermont winemakers do import fruit or grape juice from out of state, Lincoln Peak's owners pride themselves on growing all of their own grapes. "That gives us a level of authenticity; it is our product from our place," Chris said. "At the same time, we're limited in what we can grow and how much. To import chardonnay grapes from California and make a Vermont chardonnay, that just doesn't make any sense to us. The grapes we're growing, the wine we're producing, is a whole new thing. The wine is unique, and that cuts both ways."

The Granstroms work with the 22-member Vermont Grape & Wine Council, where Sara serves as marketing chair, to help build restaurant, retail and consumer understanding of the state's wine offerings. While they are reluctant to criticize other winemakers, they noted that a bad experience with one Vermont wine in the still-emerging sector can reflect negatively on the entire industry.

Overall, Chris said, "Vermont wine is good. It's better than it was 10 years ago. Some of the wines can take their place on the big stage." But, he continued, "As an industry, I would say Vermont has not arrived. The critical mass is not here. There are a few established vineyards and wineries that are operating a solid business, but there are also startups making mistakes."

"When you say the words 'Vermont beer,' you know it's a robust, highly respected industry," Sara said. "When you say 'Vermont wine,' people mostly still go, 'Huh?' or 'Yeah, I tried one once.' I don't think we're going to become Vermont beer, and I don't think we're going to become Napa, either. Some place between Napa and 'Huh?' would be a good place for Vermont wines."

As a next-generation Vermont winemaker, Sara is working with the council to try to shepherd both her family's vineyard and the state's wine industry to that place. For Lincoln Peak, that won't involve physical expansion, for which the Granstroms have neither interest nor capacity based on their current acreage.

"We're paying ourselves a pretty good salary, but we're all working pretty long hours," Chris said. Apart from the two Granstroms, vineyard manager Roxanne Smith is the only other full-time employee; part-time and seasonal staff help with harvesting, winemaking, and running the busy tasting room and event calendar. Michaela, who is Chris' wife and Sara's mother and works as a teacher, co-owns the winery and pitches in as needed.

Sara, who lives in Bristol with her fiancé, said that farming, tourist traffic and winemaking build to a frenzied crescendo from June through October. It would be ideal, father and daughter agreed, if they could sell the same amount of wine in fewer daily hours of work throughout the year.

"It's tempting to think that if we got a feature in the New York Times, our life would be set, but that's probably not true," Sara said.

Continued success, she noted, will more likely come from building momentum for the state's entire wine industry and the newer grape varietals. "Our business and a few others can continue finding success without a robust Vermont wine industry," Sara said, "but I think we would have more success if the industry [were] more robust overall." 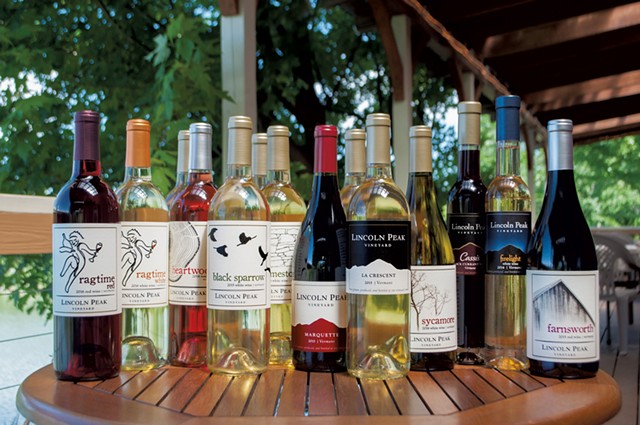 The Granstroms said they're gratified to see that the wine world is starting to take the northern hybrids a little more seriously. That change is particularly true of marquette, the star of their flagship red wine and of their Marquette Nouveau, a fresh, light, dry red modeled on Beaujolais Nouveau that will be released before Thanksgiving. Marquette is one of four "hybrid wines to know" that the popular wine education blog Wine Folly highlighted last year. The blog noted, "Wines made with hybrid varieties have improved by leaps and bounds, but they struggle from a poor past reputation and lack of presence in the wine world."

Sara has hopes for the industry-boosting potential of a Vermont Fresh Network project in which she's involved through her role with the Vermont Grape & Wine Council. Funded largely through a $20,000 U.S. Department of Agriculture grant awarded by the Vermont Agency of Agriculture, Food & Markets, the three-year effort will focus on building appreciation for and sales of Vermont wine by educating retail and restaurant staff, consumers and members of the winemaking community itself. A public forum is planned for the spring, vineyard tours for the summer.

"I am particularly hoping to get Vermont winemakers in the room who otherwise aren't," Sara said.

The Granstroms would like to see more cooperation and networking among the state's winemakers, like the productive relationship they have with Shelburne Vineyard, another respected senior member of the Vermont wine community. The two vineyards share knowledge and observations and team up for blind tastings and critiques.

"There's certainly no long tradition of wine here in Vermont. We're figuring it out every day," Chris said. "If we're helping each other make better wine, it's better for all of us."