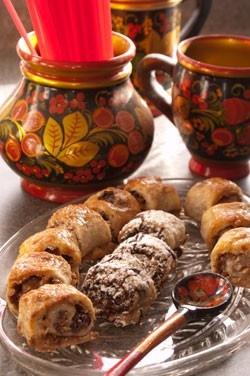 For a food lover who’s heard about an unusual delicacy, finding it can be like a treasure hunt. Weaving and wending one’s way to the source is just part of the fun. At Natalia’s Market & Deli, between Shelburne Road and Spear Street in Shelburne, that trek takes foodies past cigarettes, a popcorn machine, even fishing poles — until they reach the back kitchen of this slightly ragged convenience store. There, owner Vasily Karpov is heating water for his varenicki, or Russian pierogi.

In Russia, pierogi, or pirozhki, are not dumplings but filled breads that can be served baked or fried. Karpov’s varenicki are more like classic Polish pierogi, and have won over some sophisticated local palates. He says sales of beer, wine and cigarettes keep his five-year-old business afloat, but the popularity of his native treats is growing.

“Oh, look, it’s nice,” Karpov says as the water reaches its boiling point. He throws in a package of his frozen potato, mushroom and onion dumplings. Then he pulls bacon and onions from a case of sandwich fixings, chops them roughly and tosses them in a pan with just enough oil to set them rhythmically sizzling. In less than 10 minutes, dumplings and sides are combined on a plate, a simple Russian feast.

Karpov sells his packaged varenicki in meat, cabbage and ricotta flavors, as well as the potato option, at his store and at A Taste of Europe in Colchester, owned by the Bosnian Vujanovic family. At the latter, Karpov’s handiwork shares freezer space with mass-marketed bags of Eastern Eur opean dumplings. He touts the locally purchased ingredients in his own wares: meats from Frenchy’s Meat Market in Milton; flour from King Arthur Flour. “Our stuff, it’s like New York [dumplings] but better, because we use all natural stuff,” he says with pride.

Karpov also notes that he manufactures his homestyle varenicki entirely by hand. Appropriately, the pillowy pastries, sold in batches of about 10, are labeled “bites of joy.”

The affection with which they’re made is obvious at first bite. While many frozen dumplings tear or disintegrate when boiled, Karpov’s stay sturdy and have a comforting taste of home. The mashed potatoes inside the mushroom-potato-onion variety are creamy, with just a hint of earthy mushroom flavor and sweet onion. Karpov coarsely grinds the lean beef in the meat varenicki himself from steaks purchased at Frenchy’s. The dumplings are well seasoned and have pleasingly chewy edges.

Burlingtonians will soon be able to buy Karpov’s treats — though not the dumplings at this point — at City Market, which will begin carrying Natalia’s Market rugelach later this month. Shoppers may also find mini cheesecakes and fruit tarts there, says Karpov.

Those Ashkenazi pastries, like the market itself, are Karpov’s tribute to his Jewish wife, Natalya Karpova. She’s too busy with her own job as a hairdresser at Clip for Men on Burlington’s Main Street to work at Natalia’s. Still, Karpov says with a smile, “It’s [my] wife’s store.”

His hours are even longer than hers. Karpov, 66, works from 7 a.m. to 8 p.m., seven days a week, as he has since he opened Natalia’s in 2007. The couple came to Vermont as refugees 15 years before that, for reasons Karpov prefers not to specify. After their arrival, Karpova soon earned her chair at the salon, while her husband worked at various food distribution companies, a natural extension of his longtime position as general manager of a large grocery in Moscow.

Despite his continued employment in food, the store owner struggled with culture shock. “It was hard. It was really hard,” he recalls of arriving in Colchester, where the couple still resides. “First time, it was terrible. Right now, too hard, but much worse 20 years [ago].”

Karpov refers often to the loneliness of the long hours he works solo. He says he’s had difficulty connecting with other Russian immigrants and that his English remains halting — despite being relatively fluent — simply because he lacks time to learn. “Never I learn language, never,” he says with frustration. “It’s only practice really hard to understand various people: ‘Blah, blah, blah, blah, blah, blah, blah.’ I never learn. Never have time, only work.”

Perhaps because of the language barrier, Karpov can appear brusque at first. But it doesn’t take long for his blue eyes to peer affectionately through his wire-rimmed glasses, making him look like the kind father in a Russian fairy tale. Endearingly, he pronounces the word “not,” which he uses often, like his native “nyet.”

His Old World charm has won Karpov friends among his customers. Though interactions at the market tend to be fleeting, the owner seems to know everyone who comes in, including a man who’s stopped by with his dog to pick a drink from the wall of beverage cases.

Another customer, who says he’s on “a health kick,” complains about the price of bottled water as compared with his usual beer. “Don’t drink and drive,” joshes Karpov as the customer leaves.

Much of the same clientele arrives to pick up lunch — sandwiches made from McKenzie meats, or specials such as shepherd’s pie. There isn’t much overlap between these more salt-of-the-earth regulars and the folks who come in for varenicki and rugelach, says Karpov. The former might be mystified by a special he’s currently running for $1.99, described as “craps with ground meat and onions” That’s actually crêpes, specifically blinchiki.

“It’s special food, little bit different, for [customers] who want something a little bit interesting,” Karpov says of such offerings at Natalia’s. “I don’t make advertisement, because this product has to be eaten by [people] who knows what [it] means.”

Many of those in-the-know customers are Polish or Czech. Others are Russians Karpov met before his life got too crazy for socializing, he says, though he refuses to charge his compatriots. Plenty of Americans ask for the delicacies, too, he adds, eager to learn about foods from another culture. Once they’re hooked, Karpov says, many of those customers come in at least once a week to pick up his frozen varenicki; his red-beet borscht bolstered with beef; and his pastries, including flaky, spicy cinnamon rolls and the gloriously chewy, raisin-stuffed chocolate and cinnamon rugelach.

Other dishes need to be ordered in advance, such as the Olivier salad, a potato-and-meat-based specialty. Because that one contains mayonnaise, Karpov, who attended culinary school in Russia, prefers not to let it sit on the shelf. The cook says he’s also filled orders for breaded ground-beef patties called kotlety; stuffed cabbage; beet and herring salad; and other styles of dumplings, such as delicate Siberian pelmeni. With enough advance notice, Karpov will even delve into the preparation of French pastries popular in famously Francophile Russia. He recently made an order of Napoleons for a customer.

Karpov’s next move might surprise some fans of Slavic food. Brown sushi rice in the kitchen and a brand-new rice cooker, still resting in its box on a table in front of the deli counter, hint at his plans to begin making sushi by special order. Raw fish is all the rage now in Karpov’s native Moscow, but the chef says he was making maki back home before Russians took up Japanese cuisine.

He’ll be getting fresh, never-frozen fish directly from New York. “All products has to be kosher and fresh,” Karpov says. The former requirement is to please the market’s namesake, though her husband’s bacon-filled kitchen is resolutely not pareve.

Sushi isn’t the only non-Russian surprise due to appear at Natalia’s. Karpov is also refining his recipe for gourmet pizza crust. “I need really good, creative stuff,” he says of the quirky — and still top-secret — toppings he has planned. “I make a good couple recipes.” Look for both sushi and pizza as soon as next month, followed by the annual reintroduction of maple creemees made with local sap.

Karpov has plans for the more distant future, too. He realizes that his tiny market will never compete with the likes of nearby Shelburne Supermarket, he says. But a restaurant might just be a moneymaker. “I think about new direction,” Karpov says of the possibility of saving up money to open a Russian café. “It possible.”