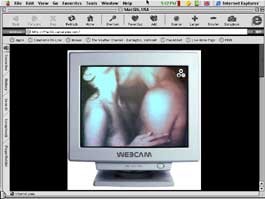 I’ve never considered myself a Peeping Tom, but there I was, in the middle of my alleged work day, secretly viewing a naked old guy washing his dishes. I wasn’t crouched in a bush, peeking in under the window shade, mind you. I was seeing him through the virtual window of my computer screen — Peeping Tomdom updated. And, though the old man was in the privacy of his own kitchen, he had hardly left the shade up by accident. He was, like an ever-growing number of people, a Webcam owner and an online exhibitionist.

It’s the new-world hobby: Strip down, put out the welcome mat, invite surfing strangers to c’mon in. How I had surfed into this particular exhibitionist’s kitchen was a mystery. Okay, not entirely: I was seeking a brief, titillating diversion from whatever mundane tasks I should have been doing when, after a few semi-aimless clicks, I landed on a site cleverly called “Camarades, the Webcam community!”

As the name implies, Camarades is a gathering spot for people with Webcams and those who like to watch them. PC owners with cams can use the site to set up a personal Webcam page; those without cams can browse online cams and communicate with their owners via various messaging programs. Not unlike a “real-life” community, it is further divided up into “sub-communities,” which bring together people with shared interests. There are, for instance, communities for business and technology, families and singles, teens and moms, reptile devotees, lost souls and emo-indie-punks. Inevitably, there is also a community for cam addicts.

Tempted as I was to investigate the reptilian world, I surfed instead directly into the “adult” community, which in turn led me to the nude community. Upon entering, I was greeted with an array of still images from individual Webcams. Clicking on one of these granted access to whatever was happening in front of that particular cam — oftentimes nothing. My initial voyeuristic forays netted empty chairs, lonely houseplants and the occasional slumbering body.

I was tickled to happen upon the elderly naked dishwasher, if only because he was actually doing something. Spying him puttering about in the buff, I had to wonder: Was he an inveterate flasher taking advantage of technological advancement? Look, ma, no raincoat required! Or was this an entirely new pastime, an effort, perhaps, to spice up his retirement years? I can’t say that I was aroused by him, but I was fascinated.

Still, it was time to surf elsewhere. On the Internet, the grass is always greener on the other side of the mouse-click.

For those of us who tend to be thorough — a.k.a. compulsive — the sheer vastness of cyberspace can prove problematic. Working at home alone and possessing the will power of a dog confronted with a T-bone doesn’t help. By the time my partner arrived home that evening, my pupils were the size of Frisbees, my brain was a collapsed soufflé. “What were you up to today?” he innocently inquired. “Oh, this and that,” I replied with Mansonesque zeal, already anticipating the next day’s revelations.

A viewer discussion board revealed a frantic preoccupation with catching Sean Patrick in various states of undress. Yet, there was more to it than that. People related to his ordinariness, which, once broadcast, became somehow extraordinary, worthy of worship. Some viewers mailed him their bed sheets so they could watch him sleep on them. Though I didn’t go so far as to share my linens, I was oddly attracted to the site and comforted by the fact that his life — despite its minor celebrity value — seemed at least as boring as mine.

“Sean Patrick Live” is, alas, dead. Even cam stars must move on. There are, however, any number of other sites doing basically the same thing. For all the talk of privacy concerns on the Internet, huge numbers are using it to poke into other people’s lives, or to put their own lives on display. The New York Times recently reported that American Webcam sales are expected to reach 36 million by 2003, and that in the near future more than half of all PCs will come with Webcams.

Not surprisingly, some personal Webcam sites have become commercial enterprises. They tend to feature women with names like Aimee and Jenni, or to be collections of buff hunks like those found at dudedorm.com. This entrepreneurial ordinariness turns me off completely, for what’s the point of professional amateurism? I’m endlessly intrigued by others’ private rituals, but not ones contrived for the dollar.

After my Camarades obsession plateaued, it was time to head for the next frontier: my very own Webcam. When the Color QuickCam for Macs arrived in the mail, its eyeball-on-legs presence immediately unnerved me. What was I — a person who considers cell phones evil — doing with this sci-fi communications apparatus? “I hate talking to strangers,” I reminded my partner as we ran to install it.

Having little desire to become performance art for any surfing passerby, we opted not to set up our own Webcam site. Instead, we joined a net video-conferencing community called ICUII, which, for a fee, provides the necessary software to enable communications with other cam users. Like Camarades, ICUII is a virtual meeting place. One can interact via captured pics and chat snippets called “Quick Messages,” or connect with one person via two-way streaming images and continuous chat. When someone asks you to “Connect,” what they’re likely saying is, “Let’s have cybersex, baby.”

Because no one sees you uninvited on ICUII, it’s more about one-on-one exchanges than pure exhibitionism. Not that exhibitionism doesn’t have its place. If there’s one thing owning a Webcam uncovers, it’s this: Stripping is the true universal language.

Though I’ve never attended Mardi Gras, I think of ICUII as a sort of perpetual Mardi Gras parade, albeit one without costumes and floats. Eager spectators stand on isolated virtual balconies tossing virtual beads to anyone who’ll flash skin. Amid this atmosphere, the average Joe needs little incentive to slip out of his boxers. Sure, cam meeting places can be used for business conferences and family reunions, but, more often than not, prurience rules.

The utter casualness with which amateur private citizens go public these days is startling. People who wouldn’t dream of dropping trou on Main Street will do so in a flash in front of a cam, not considering that once their image hits the Web superhighway, they may as well have been on Main Street. Most anything you strut over your Webcam can be “grabbed” and saved by whoever’s viewing it, then uploaded onto any number of nude amateur sites, with or without your permission.

On the occasions I’ve been coaxed out of a few Vermont layers, I’ve reassured myself that unlike, say, President Bush or the members of N’ Sync, I’m not important enough to be blackmailed. Still, it’s disconcerting to realize that an innocent little striptease could eventually land in virtually anyone’s hands.

Speaking of which, I suspect that a good percentage of computer-related repetitive-strain injuries aren’t the result of excess typing. If the Victorian wives’ tales were true, there’d be countless blind, hairy-palmed men pounding at their keyboards. It should be noted that the majority of people looking to spank the cybermonkey are indeed men, which gives gay guys a distinct advantage. To glean evidence of a world-wide horniness epidemic, one need only spend an hour or two in Webcam land.

Of course, an epidemic of horniness points to a corresponding epidemic of loneliness. We’re spending more time with our computers than we are with each other. Webcams make it easy — too easy, perhaps — to reach out and almost touch someone, to soothe the daily isolation. I’ve forged a couple of cam relationships that approach genuine friendships, but in my experience most Internet interactions have the depth of a birdbath. Nonetheless, it’s cool to effortlessly exchange conversations, flirtations and — if you’re so inclined — sexual gyrations with a far-off stranger in Istanbul, even a Vermont neighbor you’ve never chanced to meet.

Even cooler is that you don’t have to get off your ass to do it. Should anyone get bored — click, next? For me, a self-indulgent hour on ICUII is bit like consuming a pint of Ben & Jerry’s in one sitting: immediately gratifying, nutritionally suspect, faintly regretful.

As for passively peeking in on those who exhibit their existences ’round the clock, I’m over it. Since that fateful encounter with the elderly nudist, I’ve decided there’s something to be said for drapes. The disenchantment began with the “litterbox archives” on Nerdman.com — thanks for sharing, Nerdman! The final straw was a visit to the much-publicized WeLiveInPublic.com, a site created to see what happens when you put a couple under the scrutiny of 32 cams in a SoHo loft. Answer: They break up.

The day I tuned in there were no signs of human life except for a guy slouched in a chair, listlessly punching a remote. I couldn’t actually see the TV he was watching, I could only hear it. As if that weren’t grim enough, the TV audio had the audacity to loudly check me into the “Heartburn Hotel.” And that’s when I knew it was time for this Peeping Tom to take some Rolaids and check out fast.

Camarades — the main site and the adult community:

Sean Patrick Live — now defunct, but there are some links that may be of interest: