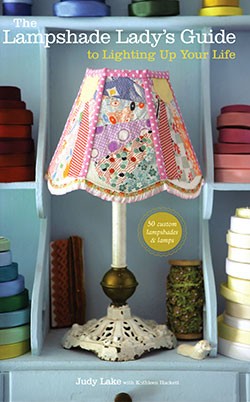 Nobody thinks they’re going to be a lampshade maker when they grow up. It’s one of those niches you expect to be filled by some anonymous worker on an assembly line. But for Judy Lake, “The Lampshade Lady,” it’s both a craft and an art.

Lake is the proprietor of a little pink-painted studio/shop — aptly called Lake’s Lampshades — in Pawlet Village, Vt. She sells her own finished, rewired vintage lamps, as well as shade frames, hardware and fabrics for DIYers or shoppers who want a custom job. This month, Lake released her first book, The Lampshade Lady’s Guide to Lighting Up Your Life , which includes directions for nearly 50 different lamp projects — including the wiring bit — and a generous resource list. She is, in a word, passionate about lamps, and has parlayed that into a livelihood.

How did a creative little girl get to this place? Early inspiration, for starters. Lake’s “Grammy Gulian” was “a world-class knitter and needleworker” who studied fine arts at the Boston Museum School in the 1920s and went on to open her own studio in Greenwich Village. “We were birds of a feather, my grandmother and me,” Lake shares in her book, “always working with our hands, creating beautiful things.”

Her own first entrepreneurial rush came in seventh grade, “when the macramé craze grabbed hold of me,” she writes. A local store in her hometown of Portland, Me., bought everything she’d made, transforming Lake from mere junior high hobbyist to a bona fide artisan.

She began to study textile arts. By the time she graduated from the University of Vermont in 1981, with a studio art degree, Lake had an educated view of her field that was also informed by the “hundreds of craft shows” she’d attended with her mother. What she saw and learned during a Scandinavian year abroad continues to influence her sense of design, she says.

That may not explain “Duncan’s Cowboy-Boot Lamp,” pictured in Lake’s book, nor the shade made from 1950s floral tablecloths. The former is a lamp (named for her son) with an actual worn boot for a base and some nifty Lone Ranger cloth on the shade. That and the tablecloths, hankies, chenille bedspreads, embroidered towels and other vintage fabrics that overflow the shelves at Lake’s Lampshades indicate her fundamental M.O.: Find old stuff at flea markets and yard sales and repurpose it. Lake was an “indie” crafter before the term became hip.

Though charming textiles dominate the design ideas in The Lampshade Lady’s Guide, Lake also shows how to make shades from treasured possessions such as baseball cards, photographs or the pages of old picture books. In her own house, she reveals in a phone interview, she has “probably 30” lamps, with another six in the closet. “I change them around a lot,” she says. “Sometimes I make something [in the studio] that’s just so darn cool, I have to take it home.”

Her look is distinctly cottage-y; antique lovers and the “shabby chic” crowd will surely find lamps to die for — or to make themselves. Those who prefer a stern minimalist or industrial look, on the other hand, won’t find much here — except step-by-step instructions for turning just about anything into a lighting fixture. The techniques transcend tastes. Lake points out that her projects range from nightlights — so simple a child can make them — to couture shades that “would make any interior decorator swoon.”

In 1985, Lake moved with her husband to a tiny town in southern Vermont and got pregnant. That might sound like a career killer, but Lake says the changes gave her a few years to “figure out what I wanted to do with my life.” Familiar with the craft-fair circuit, she thought about what she could make and sell. Then, one day, someone told her “to do one thing and do it well.” With that advice in mind, Lake began to focus on shades — “I didn’t need a lot of upfront money, and I could do it when my son was young,” she explains — and began to work her way up the “food chain” of craft events.

Lake, now 50, concedes that finding the self-confidence to start her own retail business took “a long time.” But in 1996 she opened her store in Pawlet, where she holds classes for all ages. (WhistleStop Antiques co-owner Mary Heinrich Aloi in Burlington is a recent “graduate” who now makes and sells her own shades through a new enterprise called Vintage Inspired.) Three years ago, Lake bought the “cute Cape” that she says was built in 1790. “I have it painted purple inside,” she notes. “Very funky.” With the publication of her book, the Lampshade Lady turns up the lights.

The Lampshade Lady’s Guide to Lighting Up Your Life by Judy Lake with Kathleen Hackett, Potter Craft, 160 pages. $27.50.

Judy Lake hosts a book signing and demonstration this Thursday, August 27, at Northshire Bookstore in Manchester, 7 p.m. On Sunday, September 6, she’ll sign books at her shop at 60 School Street in Pawlet Village, 10 a.m. – 5 p.m., in conjunction with Art on the Green.