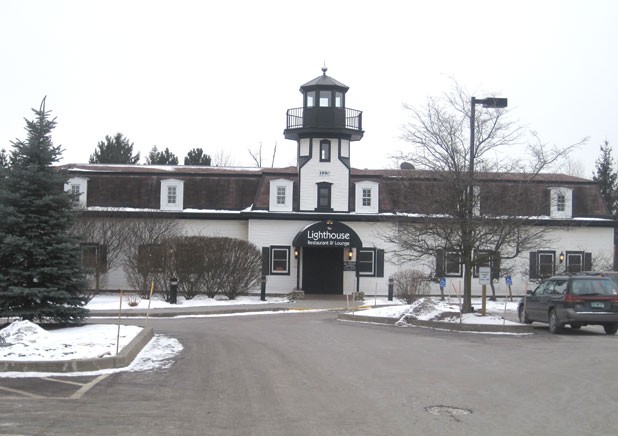 When Levi Carter began assembling the menu for his new restaurant, the Lighthouse Restaurant & Lounge, he thought prime rib would be one of the most popular items. But, since opening on January 17 at 38 Lower Mountain View Drive in Colchester, the chef has been proven wrong. “Pretty much everything is pretty popular,” Carter says of his expansive bill of fare. Except the prime rib, he adds, available in both king and queen cuts.

Not that he isn’t selling plenty of that, too. Carter says the steakhouse, adjacent to the Hampton Inn, is feeding more than 100 people each night. That’s considerably more than the chef was serving at the Clover House, which owner Doug Simms closed on December 31, 2012, to open the larger Lighthouse.

A hallmark of the restaurant’s appeal is its 60-item salad bar, which features fresh fixings as well as a number of salads prepared by Carter and his uncle and sous chef, Joe Paquette. The foundation of the menu is an assemble-your-own dinner, with the option of 20 different proteins. They range from chi-chi filet mignon or lobster tails to down-home barbecue-bacon meatloaf or teriyaki chicken breasts. The meals come with a trip to the salad bar or a bowl of French onion soup and a range of starch choices, including jasmine rice and macaroni and cheese made with 2-year-old Grafton Village Cheese cheddar.

Other entrées are predesigned specialties, including Hot Buttered Lobster Risotto, made with beurre-blanc-poached lobster tails; and sesame-seared yellow-fin tuna with cucumber-wakame salad and pickled ginger.

Like dinner, lunch is served daily; it includes a build-your-own-burger option not available at the evening meal. Carter says a combination of salad bar and daily soup has been especially popular with the work lunch crowd.

The bar scene at the restaurant is also jumping, says Carter. A major renovation has shaped the former T Bone’s into a more sophisticated, dark-wood-bedecked destination. A large Scotch list is part of the appeal; so are mixed drinks, including the warming German Chocolate Cake, composed of Frangelico, white crème de cacao and Malibu rum.