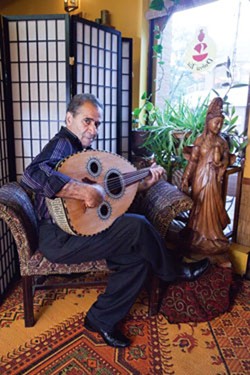 Grup Anwar, or, more formally, Anwar Ensemble, is a new group led by Anwar Diab Agha. The 72-year-old is a master oud and violin player and a famed musician and composer in his native Syria. Before moving to the United States permanently in 2008 to be closer to his children — who had immigrated here over the previous couple of decades — Agha was a member of the Syria National Radio and Television Orchestra in Damascus. He studied under the masters of traditional Arabic music, and has traveled the world as a highly respected Arabic master himself.

Anwar means luminous in Arabic, and the word is a fitting description of Agha’s general demeanor. He’s quietly reluctant to speak on the current political and social strife in his native Syria, but he brightens up as he muses on the unifying power of music.

“I have Jewish friends, Christians, Muslims,” he says. “I love people, and I love coming together over music. So I don’t like to talk about politics. Only music.” He also beams when he talks about his adopted state. “I love the people of Vermont,” Agha enthuses. “They are always smiling. They are so welcoming."