Life Stories: Tom Morse ‘Loved to Do His Own Thing’

At night, looking south from the house he built on his farm in East Montpelier, Burr Morse can see the blinking lights of the airport in Berlin. Sometimes he imagines the places to which he could fly away.

His son Tom (August 7, 1980-November 23, 2021) liked to look in another direction. When he was a kid, Tom used to climb out his bedroom window onto the low-pitched roof beneath it. From there, he had a view of the sugarhouse where his father boiled sap. Tom liked to watch the sparks fly.

In the daytime, Tom made appearances in the sugarhouse, popping in from the fields and woods of Morse Farm Maple Sugarworks to explain to visitors how to make maple syrup. Tom was 7.

"He'd tell them about the process," Burr, 74, said. "People from California, Texas, Australia — they wouldn't know about it. It was in Tom's blood and his DNA."

Tom was an eighth-generation Vermonter, farmer and sugar maker. He was also a stellar trumpeter who performed with numerous bands in Vermont. Tom died of exposure last fall at age 41.

"He went into the woods, lay down and nature took over," Burr said.

A "very extensive search" for Tom included the local police, according to his father. His body was found in Berlin eight days after his death on November 23, 2021, Burr said.

Thomas Parker Morse was born on August 7, 1980, the younger of two sons of Burr and the late Betsy (Parker) Morse. He grew up at his family's hillside farm on County Road, which his grandfather, Harry, had transformed from a working dairy into a pioneering venture in agritourism in the mid-1960s.

Harry and Tom had the same "twinkle in their eye," Burr said.

Morse Farm is a destination for people seeking maple creemees in the summer, pumpkins in the fall, Christmas trees in the winter and maple syrup in the spring. About 60,000 tourists visit the farm every year, Burr estimated, many by the busload.

Tom was always drawn to the farm's sugar-making operation. As a boy, he walked in the woods hanging and collecting sap buckets. In recent years, he took charge of installing and overseeing a vacuum system for collecting sap, part of the modernized 5,000-tree operation that used reverse osmosis in the sugaring process.

If Tom hadn't stepped in, "I'd still probably be hanging buckets off trees," Burr said. "Tom loved to do his own thing."

Five years ago, Tom rebuilt and expanded the sugarhouse that his ancestors had constructed on their Calais farm and trucked to the one in East Montpelier in 1953.

"Tom had those skills and muscles," his brother, Rob, said, noting that Tom was "uncommonly good" at various aspects of farming.

In sugaring, though, the farmer plays a secondary role to nature, Burr observed. Some years, the season is two weeks long; other years it runs for six weeks.

"Ask me in May when it's over," Burr advised when asked about the end of the season. He believes that one of the things Tom loved about maple sugaring was its element of suspense.

Still, sugar makers can count on a few things, such as being outside as the days grow longer and the sunshine stronger and "hearing the sound of certain birds you haven't heard in six months," Rob, 43, said.

Tom loved all that, and he was gratified by the accompanying work: checking and repairing sap lines; talking up tourists at the farm; collecting sap from a tank in the woods at 1 a.m., before it could overflow into snow and mud.

"It's a great time of year to be outside," said Tom's friend and fellow sugar maker Seth Chapell, 37, of Templeton Farm in East Montpelier. "It was just something Tom enjoyed doing. And he found solace and peace doing it."

This year, as part of the family's effort to sugar in Tom's absence, Chapell is tapping trees near the house where Tom lived with his wife, Monika, and their daughter Caitrin (Cait), who is 9.

"I think Tom would be glad that we're using [the sugar bush]," Chapell said, "and spending time in the woods where he spent so much time."

Tom's dedication to sugar making was tied to his interest in local history, in which his family played a central role. In 1789, his ancestor James Morse traveled on the historic Bayley-Hazen Military Road, built during the American Revolution, from Wells River to Cabot.

James' son moved southwest to Calais and established the Morse family there, where generations would farm after him. When Burr was 5, his father relocated to the farm in East Montpelier. But Burr still feels a familial connection to Calais, where the cemetery and sawmill at Kents Corners are named for his ancestors.

Tom felt the pull of the place, too. In his poem "The Calais Stage," he wrote: "When I used to bring [his grandfather] Harry for rides / I always knew the only direction to go was north, / Up the Calais Stage toward Maple Corner and Woodbury Gulf."

In fourth grade, Tom started lessons at East Montpelier Elementary School on the trumpet, an instrument he would play all his life. He also played piano and was a gifted flügelhorn player and a composer.

His musical life, too, was part of a family tradition.

Burr is a renowned trombonist who has played with the Vermont Jazz Ensemble for almost 40 years. Rob (short for Robinson) is a bass player who is currently part of the seven-piece band for the Tony Award-winning Broadway show Hadestown. 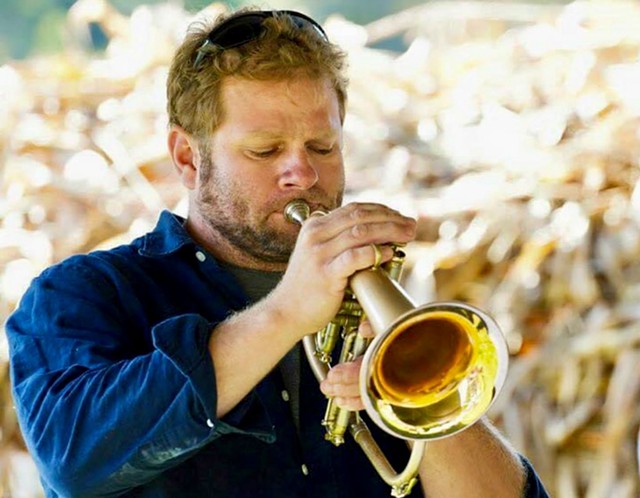 Tom played with his father and brother — and countless other Vermont musicians — in various bands over the years. Primarily a jazz musician, he also played blues, funk, R&B, and rock.

When people credit Burr with his sons' musicianship, he passes the praise along to their mother. She couldn't "croak a note," he said, but she made their kids practice.

Rob, in turn, observed that his brother "learned and inherited" his musical taste from their parents and from "growing up around Burr's gigs and rehearsals." Tom's playing sometimes echoed the greats (Freddie Hubbard, Miles Davis), Rob said, but his "melodic sensibility" was his own.

"My brother's beautiful sound and voice on the trumpet were clear extensions of his essential nature as a person, an eighth-generation Vermont farmer and sugarmaker with an intelligent, creative and soft-spoken spirit," Rob wrote in an email. "As an improviser Tom played like he spoke, with warmth and clarity while honing right in on the matter at hand."

One of the ensembles in which Tom played took shape informally when he was in elementary school. The Morse brothers formed a group with their close friends the Davidian family of East Montpelier.

Their first gigs took place at a town event called Rally Day. When the boys were teenagers, the group played at a birthday party for Harry, the Morse brothers' grandfather.

More recently, the combo got together at Christmastime, when members who had moved away were back in town. The sextet performed at the Black Door (since closed) and other venues in Montpelier.

Tom and Joe, who became friends in first grade, used to jam together and run through jazz tunes as teens hanging out at the Morses' house. In high school, they played in a funk/jam band called Space Butter.

"My guess would be, 90 percent of the people who saw Tom at the Morse Farm would have no idea that he was an amazing musician, composer and trumpeter," said Joe, 40, now a jazz pianist based in New York City. "He was very humble about it; he kept it pretty private."

Last week, Rob came home for a few days from his Hadestown gig to visit his family, spend time at the farm and help with sugaring. The Morses tapped 470 trees this year. They're boiling sap in an evaporator over a wood fire, burning wood split by Tom.

"I think Tom is aware we're scaling down," Burr said. "And I think he's OK with it."

The ninth generation of the family, Cait, got her first taste of sugaring in late January 2013, two weeks after she was born.

Monika held Cait in a baby carrier and bundled herself up in Tom's clothes to make extra room for their baby, who was snuggled against her chest. The family walked to the woods by their house, where Monika and Tom drilled and tapped the maple trees.

"We would go out and have a blast," Monika recalled.

At night in the sugarhouse, when Tom was working, they ate dinner together. They played Miles Davis and danced.

"Sometimes," Monika said, "I could even swindle him into playing the trumpet for me."

Music was the centerpiece of Tom's memorial service at College Hall at Vermont College of Fine Arts in Montpelier. Burr played in three ensembles for the occasion. "I wanted to do it for Tom," he said.

Burr was among the horn players who concluded the service by marching through the hall playing his instrument. The group's performance of "Second Line (Joe Avery's Blues)" was at once celebratory and mournful, giving the eighth-generation Vermonter a New Orleans-style send-off.

The second annual Maple Roots Festival, a music festival, will be held on July 23 at Morse Farm Maple Sugarworks in East Montpelier. The event is, in part, a tribute to Tom, who named and cofounded the festival last summer.