In the spring of 2018, Kira Jaye Serisky (July 9, 2003-February 7, 2021) heard that four kittens had been found in a trailer, along with other neglected animals, in Addison County. The 14-year-old begged her mother to let her foster the little felines.

The kittens were suffering from respiratory infections that required frequent trips back to Addison County's humane society, Homeward Bound, for treatment. The Shelburne teenager was undaunted. She brought in another round of kittens, and another. Eventually, she began to administer injections, deliver subcutaneous fluids, and feed some of the sickest and neediest kittens with a syringe.

"The kittens, they gave her purpose." Marge Serisky tweet this

This level of caregiving was all too familiar to Kira. She had Ehlers-Danlos syndrome, or EDS, which encompasses a variety of connective tissue disorders. She depended on a feeding tube herself and knew about changing a central line for her own IV.

Kira died in February, at age 17, from complications of EDS. By then, she had rescued about 40 kittens, said her parents, Marge and Pete Serisky.

"The kittens, they gave her purpose," Marge said.

From a young age, Kira suffered from broken bones and swollen joints, chronic bouts of vomiting and other gastrointestinal issues, and multiple infections and ailments brought on by EDS. Once an athletic kid and competitive skier, in the final few years of her life she couldn't walk and used a wheelchair.

None of this slowed Kira down, particularly when it came to rescuing kittens, according to the Seriskys.

When she was 15, Kira became an intern at River Cove Animal Hospital in Williston, where the family's veterinarian recognized her interest. By that time, she had adopted Arminius from Homeward Bound. Coincidentally, he has the feline version of EDS and some physical challenges, including stunted front legs; only Kira could put them in braces when Arminius was young.

By rescuing kittens, Kira regained some of the control she had lost to her debilitating illness, Pete said, recalling a conversation he had with his daughter.

She hated that she was "dependent on people for her daily needs," he said. "And the way she can give back is to have kittens be dependent on her. She kind of passes it along." 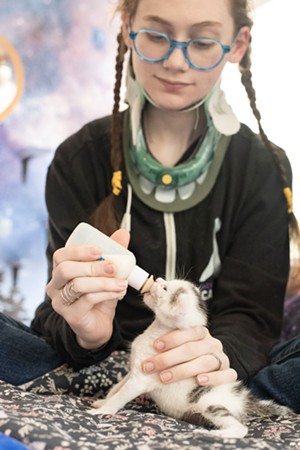 Kira, or "KJ" to those who knew her, made kitten-rescue friends all over the country. She started fostering kittens through Meow Parlour, a rescue organization in New York. On her Instagram account, @krazykittens802, she racked up 13,400 followers. Her parents now maintain the account, providing updates on the kittens they continue to foster.

In the fall of 2018, following medical appointments in New York, Kira met renowned rescue expert and author Hannah Shaw, aka "the Kitten Lady," at a talk in Connecticut. Kira showed up with a 2-day-old kitten in her arms and, after the event, told Shaw that she had to syringe-feed the tiny furball every two hours.

"There are a lot of people who are interested in cat welfare and kitten welfare, but it takes a really special person to focus on the types of populations that Kira was focusing on," Shaw said in a phone call from her home in California. "She and I have, or had, very similar interests, working with the smallest, young neonatal kittens and also with kittens with special medical issues."

In early 2019, the Make-A-Wish Foundation of Vermont granted Kira's request for a specially equipped bedroom in her home to serve as her kitten nursery. The Seriskys had the room built out onto part of their rear deck in Shelburne, where they have a view of Lake Champlain. Kira moved in there with her hospital bed from the living room.

Jane Burchard, a Burlington musical theater actress, choreographer and designer, painted a star-filled sky of deep purple on Kira's walls, with the celestial faces of her favorite kittens looking over her. On one wall, two "bubble bunks" encased in rounded glass provide perches for the more ambitious kittens. A small portal at the base of the wall allows Arminius to come and go, visiting the kittens as he chooses.

Kira asked Shaw which machines and supplies she needed for the nursery. She created an Amazon wish list, which Shaw shared on her own heavily followed social media. That's when the boxes started arriving, sometimes dozens in a single day, from people wanting to support Kira's cause. One anonymous donor purchased an incubator for neonatal kittens that costs about $1,500.

"It's very powerful that, when given the opportunity to envision what dream or wish she would have for her life, she took that opportunity to create a space that could be a safe haven for vulnerable kittens," Shaw said.

In the large, wheelchair-accessible shower off Kira's bedroom, her rabbit Maple now takes up residence. During an interview last week with a Seven Days reporter, Marge picked up the friendly brown-and-white bunny and snuggled him to her chest.

"He misses her," Marge said, her eyes filling with tears and her voice breaking with emotion, "just the way he needs to love, and ... she's not here."

Kira would play music to soothe her animals. She learned the euphonium at age 7 and picked up the ukulele last year. She also created artwork and designed jewelry, including a silver pendant etched with an elephant that her mother wears around her neck.

Growing up, Kira spent most weekends at Sugarbush Resort with her parents. "We were a very hard-core ski family," Marge said. Pete still serves on the ski patrol. Kira tried her first runs as a toddler. By age 12, she joined the Sugarbush Junior Ski Patrol and raced on Cochran's Ski Club team, placing second in the Vertical Challenge. In 2017, after her condition had deteriorated, she placed first competing as an adaptive sled skier.

On skis, her mother said, Kira showed "pure grace" but otherwise was "clumsy." She fell often and broke bones as early as age 6. EDS messes up proprioception, the sense of where one's body is in space at a given moment. During elementary school, Kira experienced bouts of vomiting that would last for four days.

"We always just kept moving forward and never made a big deal out of it," Marge said of her daughter's condition. "The problem was, it was so complicated."

Missing her athletic activities, she became an honorary member of the University of Vermont women's basketball team. Some team members called and visited Kira and became close friends. A few recently stepped up to adopt the Seriskys' latest fosters: a mother cat and four kittens.

"Kira never looked back; she always looked forward," Marge said, recalling that her daughter once told her, "I'm happy I had the childhood I had, because it made me who I am."

Kira died while COVID-19 restrictions prevented a memorial gathering, so the Seriskys are planning a celebration of her life in September at All Souls Interfaith Gathering in Shelburne, unless further COVID-19 outbreaks occur at that time.

As they carry on Kira's rescue work, they keep her bedroom nursery as it was. Drawers remain full of veterinary medical supplies. The most recent foster kittens contracted coccidia infections, and the Seriskys gave up several nights' sleep caring for them.

The couple is working with the Humane Society of Chittenden County to create a fund in Kira's name that will help low-income adopting families pay for spaying and neutering. This summer, Shaw established Kira's Kitten Fund as a special campaign through her Orphan Kitten Club charity. The fundraiser recently wrapped up with $40,000 to distribute to programs for youth education and awareness related to neonatal kitten care.

The Seriskys take pride in their daughter's legacy. They even made little graduation hats for their last adoptees, as Kira did when her kittens left for their forever homes and she kissed them goodbye.

"There's a lot of anger and loss," Marge said. "And these kittens, they brought us joy again. They made us all laugh. They made us happy."