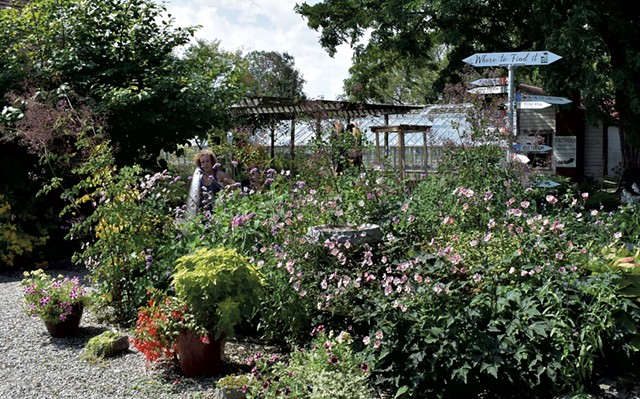 The daffodils are blooming along the driveway to Horsford Gardens & Nursery in Charlotte. At the edge of the greenhouses, tulips that two weeks ago were bent and obscured by spring snow have rebounded in vibrant colors. The black locust trees by the garden shop, growing side by side for a century, will soon leaf out.

The two trees were in rough shape when Eileen Schilling (April 13, 1958-March 19, 2021) and Charlie Proutt purchased Horsford 35 years ago. The couple planted a flower garden around the trees, built a small stone wall, and rerouted a road that ran past them. Before long, the black locusts "started growing like teenagers," according to Proutt.

Many projects took root and grew at Horsford over the decades that Schilling and Proutt owned and operated the business. They include the creation of propagation and display gardens, the installation of antique greenhouses, and the activities of actual teenagers — their three children — who grew up in the family's home at the nursery. 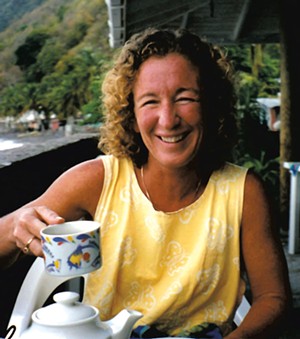 This season at Horsford is dedicated to Schilling, who died of cancer on March 19. Her death occurred a month before she was to turn 63, a mid-April birthday that coincides with the start of the gardening season.

"Eileen has been the voice and tone of the nursery for decades," Proutt wrote in a company newsletter. "We will strive to listen to her guidance in planting, in working, and in sharing plant expertise as we find a way to carry on."

Schilling was a dynamo who stood barely five feet tall and weighed about 100 pounds. She loved cosmos and zinnias and worked in every part of the nursery, driving around the grounds in a gray pickup truck, propped up in the driver's seat with pillows. Visitors to Horsford might find her in the greenhouse, in the field of perennials or at the garden center retail shop.

Schilling was a student at the University of Vermont, studying early childhood education, when she and Proutt got together. They met through her roommate, who worked on the landscaping crew at Horsford with Proutt.

"I ended up taking her out to the Last Chance Saloon," Proutt recalled, referencing the long-gone basement bar on Main Street in Burlington. "We sat at the bar and drank — the way people used to meet."

Schilling and Proutt were married in 1983 at Blueberry Hill Inn in Goshen. Together, they raised a son and two daughters, now in their thirties, and ran Horsford, which they purchased as young employees of the business. Schilling was a "greenhouse girl," as the position was called 40 years ago.

"This was a big step for us to buy Horsford," Proutt explained, adding that he and his wife borrowed the full price to purchase it — $285,000. Founded in 1893 by noted botanists Frederick Horsford and Cyrus Pringle, the business was failing when Schilling and Proutt took over.

"It took a long time to make money, and we did it the best we could," Proutt said. "You have to love horticulture, or else you can't make it work."

Greenhouse manager Steve Davidson said he owes his career to Schilling. She taught him about plants, gave him autonomy and the opportunity to pursue his own interests, and demonstrated the drive for hard work. Schilling and Proutt created and ran an ethical workplace, he said.

"I was basically being paid to learn how plants are grown," Davidson, 33, said. "It's invaluable. I get to spend the rest of my career teaching other people what I was given."

Schilling grew up in Middletown Township, N.J., a town near the shore at Sandy Hook. She was the third child in a family of seven kids, with grandparents and cousins nearby. Summer days were spent riding bikes, swimming in the ocean and her grandparents' pool — and weeding and eating from her father's quarter-acre vegetable garden.

"I don't think we liked it so much when were forced to [weed]," said Margy Schilling, Eileen's older sister. "But quite a few of us are still into gardening today."

Eileen Schilling left New Jersey for a year of college in Boston and Los Angeles before winding up at UVM. En route east from California, she traveled by bus to Phoenix, and then "hitched a ride with a bunch of strangers" from Phoenix to New York City, Schilling's son, Henri Proutt, said. She was to meet her father at the Port Authority, a bus terminal in midtown Manhattan.

"She was just a fabulous mother." Naomi Greenwald tweet this

Looking around the bus terminal, Greg Schilling didn't see his daughter. But he did see people moving out of the way, making room for a diminutive person pushing through the crowd, an Army duffle bag slung over her shoulder.

"Well, there's my daughter!" he exclaimed, according to Henri, who recounted the story by telephone from San Francisco.

"She was, pound for pound, the strongest person I know," Henri said of his mother. "She could probably carry a 50-pound tree in each hand."

Schilling valued her kids' individuality and encouraged their independence, according to family and friends. Her children never had a standard bedtime when they were little and were disallowed from spending the day inside.

"She was just a fabulous mother," said Naomi Greenwald of South Burlington, a 40-year friend of Schilling's. "She didn't coddle her kids. She raised them to be very independent."

When Elizabeth, Schilling's youngest, was a student at the University of Colorado, she went to Henri's place in San Francisco for Thanksgiving break. Schilling sewed place mats and napkins for their holiday meal and mailed them to her kids with candles and little packets of spices and seasonings.

"All things that a twentysomething guy would have never thought about in trying to cook a Thanksgiving," Henri wrote in an email, "but made us feel like we were home."

Beyond the nursery, Schilling engaged in a variety of activities. She painted with watercolors; volunteered in a kindergarten class at Lawrence Barnes School in Burlington (now called the Sustainability Academy); and skied, hiked and kayaked with friends. True to her Jersey-girl roots, Schilling sought out beach life — on vacations with her family to the Jersey shore and on trips with her friend Susan Hong.

The annual excursions with Hong, who also owned a Charlotte business with her husband and has three children, started 22 years ago when Schilling called Hong with a proposal: "'My sense is that your husband, like mine, would be OK if we left them with the kids and took off,'" Hong recalled.

This set in motion a late-winter trip to a sunny beach — Bonaire or Curaçao — for snorkeling and other adventures. The pair proved to be excellent travel buddies, from giving each other space to skipping lunch in favor of exploring a coral reef.

Schilling made her laugh, Hong wrote in an email, "and what a gift that is in this world where it's so easy to find strife and despair."

In her last year, Schilling found special joy in her 1.5-year-old granddaughter, Penelope, the daughter of her middle child, Catherine Jenkins. Schilling lit up when she saw Penelope, Jenkins said by email, and Penelope adored her grandmother.

"She was so supportive of me during my first year of motherhood," Jenkins wrote, "and from her I have learned countless lessons on how to be the best possible mother, daughter, and friend."

This Sunday, May 9, is Mother's Day, traditionally a busy day at Horsford. Families mark the occasion with a trip to the nursery for lilacs, roses and hanging baskets. Talking to Schilling, who helped with purchases and offered advice on plants and flowers, has been part of that tradition. Her kids, when they were young, made their mother a bouquet, picking flowers that were blooming in the gardens by their home.