License to Ill: Is the Vermont DMV up to the Job? | Fair Game | Seven Days | Vermont's Independent Voice

License to Ill: Is the Vermont DMV up to the Job? 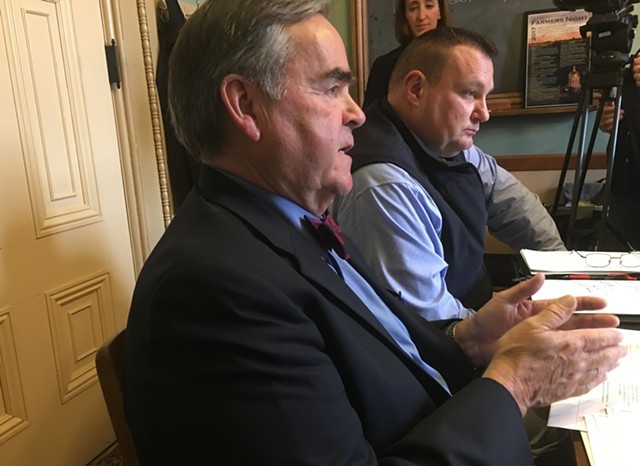 These are not the best of times for Robert Ide, commissioner of the Vermont Department of Motor Vehicles. His agency has found itself dead center in one controversy after another. It's quite the change for this usually sleepy corner of state government.

The most recent blow came on July 18, when Attorney General T.J. Donovan ruled that the DMV's facial-recognition program is illegal. The department had stored 2.7 million images of license applicants — and had shared the database with police.

The system's use as a law enforcement tool was first reported in May by Seven Days. Two days later, Ide suspended the program pending Donovan's review. Now, the AG has ordered the program shelved unless the legislature formally authorizes it.

Donovan's decision was based on a 2004 state law barring the DMV from implementing "processes for identifying applicants for licenses, learner permits, or non-driver identification cards that involve the use of biometric identifiers." In May, Ide professed to be unaware of that law.

Ide, who has served as commissioner since 2009, recently claimed ignorance of another departmental responsibility. On July 16, VTDigger.org reported that he only recently discovered the DMV's legal responsibility for enforcing motorboat speed limits near shorelines.

You'd think after eight years on the job, he might have finished reading the manual. But those are trifles compared with what some see as a troubling pattern of enforcement practices that run contrary to state law or policy.

"What we've seen from his agency is no changes on civil rights and civil liberties until it's brought to a much higher level," says Jay Diaz, staff attorney for the American Civil Liberties Union of Vermont. "We get ignored, then argued with, then delayed. Only after litigation or substantial public attention do we get action."

In addition to the facial-recognition program, Diaz points to the DMV's pattern of cooperation with U.S. Immigration and Customs Enforcement, its alleged reluctance to issue driver's privilege cards as opposed to federally compliant driver's licenses, and the June arrest of a commercial trucker for possession of cannabidiol (CBD) oil, a hemp derivative that's legal in Vermont.

Let's take those one at a time.

Last August, the DMV entered into an agreement with the Vermont Human Rights Commission ordering changes to its policies and procedures and the retraining of DMV staff. That was the conclusion of the case of Abdel RazaQ Rababah, a Jordanian man who had lived in Vermont for a decade. In 2014 he applied for a driver's privilege card and was reported to ICE by DMV employees. That triggered a two-year-long deportation proceeding for Rababah.

At the time of the settlement, Ide acknowledged that his department "had made a couple mistakes," which seems the absolute least he could say after putting Rababah through a legal nightmare. But for months afterward, DMV staff continued to routinely pass information to the feds, as Seven Days first reported in April. More recently, Diaz says, it appears that such contacts have stopped.

It was far from the only time Ide's minions "had made a couple mistakes" in carrying out the driver's privilege card program, which was established by the legislature in 2014 as a way for undocumented immigrants to drive legally. The cards became widely popular among Vermonters of all types. But some have found that DMV staffers are resistant to issuing privilege cards and actively urge people to get federally compliant Real ID licenses instead.

"We've had bad experiences with DMV employees," says Enrique Balcazar of the advocacy group Migrant Justice. "When people go to the DMV, they are pushed to apply for Real ID cards." (Balcazar was arrested by ICE agents on March 17 and is awaiting deportation proceedings.)

Both Diaz and James Lyall, executive director of ACLU-Vermont, sought privilege cards and went through the same runaround. "I had to ask three levels of supervisors," says Lyall. "They kept asking, 'Are you sure?'"

For his part, Ide professes ignorance of any problem with the privilege card program. "I wish he'd bring these problems to our attention," he says of Diaz's complaints. "It's an interesting way to learn about things, through the media."

Lyall scoffs at the notion that Ide was unaware, considering the broad publicity around the Rababah case and the settlement Ide was forced to accept.

Even if the DMV has cleaned up its act, it'll take a long time to ease the climate of mistrust surrounding the agency.

"There have been so many occasions of DMV collaborating with ICE," says Balcazar. "They've built relationships with ICE. We can't just trust that that's changed."

And now, a new seed of doubt.

On June 8, DMV officers were inspecting commercial trucks on Interstate 91 in Springfield. In one truck, they found CBD oil. Though it's legal to sell and possess in Vermont, the officers ordered the driver off the roads for 24 hours and had his truck towed away. Ide's department was apparently proud of the incident; it highlighted the event on the DMV's Facebook page.

"A pattern is emerging that is concerning," says Sen. Chris Pearson (P/D-Chittenden), an advocate of legalizing pot. "Hemp is not marijuana. If the DMV can't figure out how to follow the law, then we have a problem."

Ide's explanation of the hemp oil bust does little to allay the mistrust.

"Vermont law does not conform with federal law," he says. "We get a lot of federal funding, so we can't ignore federal law."

OK, wait. Did he just say that the DMV should sometimes operate as an arm of federal law enforcement? I think he did.

When reached for comment about all these issues, Gov. Phil Scott's spokesperson Rebecca Kelley emailed the following boilerplate: "The governor and his administration have taken direct action to address issues raised by the DMV, such as suspending use of the facial-recognition software, and will continue to identify areas where we can implement improvements. He ... has confidence in the commissioner's ability to provide the leadership necessary to further improve and modernize the department."

"Protection of civil rights and liberties is all about leadership," the ACLU lawyer says. "We need leadership that promotes a culture of protecting rights and enforcing the law."

On July 21, the state's Emergency Board held its regular twice-yearly meeting. The board, whose members include the governor and the chairs of legislative money committees, heard the latest economic and revenue projections for the new fiscal year.

And the news was sobering. Not so much the predicted $28 million shortfall in state revenues as the economics underlying that projection that bore a hidden punch.

State economists Tom Kavet and Jeff Carr reported that Vermont is in the eighth consecutive year of growth — a historically long recession-free stretch. They also said that Vermont is close to full employment and that housing prices have fully recovered from the 2008 recession.

"The question we should all be asking is, how is it that after eight years of expansion, that we're still short of revenue? Or long on spending?" asks newly installed state Finance Commissioner Adam Greshin. "Typically at this stage of expansion, your coffers are running over."

A number of explanations are on offer.

"The expansion has been uneven," says Bill Schubart, a Hinesburg writer and entrepreneur who served on the state's 2011 Blue Ribbon Tax Structure Commission. "'Full employment' doesn't count those who have given up and don't apply for unemployment."

"Look at the soft areas," counsels Rep. Janet Ancel (D-Calais), chair of the House Ways and Means Committee. Those include the sales tax and the transportation fund, which gets its state funding from the gas tax. Wages haven't risen as they normally do in times of recovery, which means income tax receipts haven't been as robust as they might have been.

Sales tax receipts have lagged as Vermont's economy has shifted from goods to services. Gas tax revenue is affected by a trend toward higher-mileage vehicles — and faces a longer-term threat from the expected change to electric-powered transportation. But let's leave that for another time.

The Blue Ribbon Tax Structure Commission reported many of these shifts and offered a comprehensive plan to modernize Vermont's tax system. Among the panel's recommendations: Apply the sales tax to services but lower the tax rate, and broaden the income tax base by eliminating many tax credits and deductions.

All sensible, and all political dynamite.

"Even just exploring the implications [of the sales tax change], we were torn limb from limb," recalls Senate President Pro Tempore Tim Ashe (D/P-Chittenden) of his previous tenure as chair of the Senate Finance Committee. "Just for looking at it."

The report to the E-Board is concerning enough, but it might prove to be the least of our troubles.

"I'm not seeing a crisis," says Ancel. "I'm much more worried about what we'll get when the feds pass their budget."

You and me both.

Sometime around November 1, the Rutland Herald will leave the Wales Street building that's been its home for roughly eight decades and move to a much smaller leased space "about seven minutes' walking distance away," says Rob Mitchell, general manager of the Herald and its sister paper, the Barre-Montpelier Times Argus.

"Our current building is 23,000 square feet," Mitchell explains, while the new space is "about 5,200 square feet. It's a much more reasonable space for what we need."

The current space has been too big for years. Indeed, it's been for sale since 2013. So why move now, when the paper still owns the Wales Street building?

Funny thing. Turns out, the paper doesn't own it.

Last fall, facing a financial crisis, the Mitchell family sold the Herald and the Times Argus to Reade Brower of Maine and Chip Harris of New Hampshire. The deal brought a measure of stability to the papers and some promise for the future. (Mitchell retained an executive position under the new owners.)

What wasn't widely noticed at the time was that the Wales Street building was not part of the deal. It is still owned by the Herald Association, Inc., the Mitchell family's corporate entity.

To put it baldly, the building was a white elephant that the new owners didn't want. Now they're planning to move out, and the Mitchell family is stuck with 23,000 square feet of soon-to-be-vacant space.

Mitchell asks, only partly in jest, "Do you know anyone looking to buy a building?"