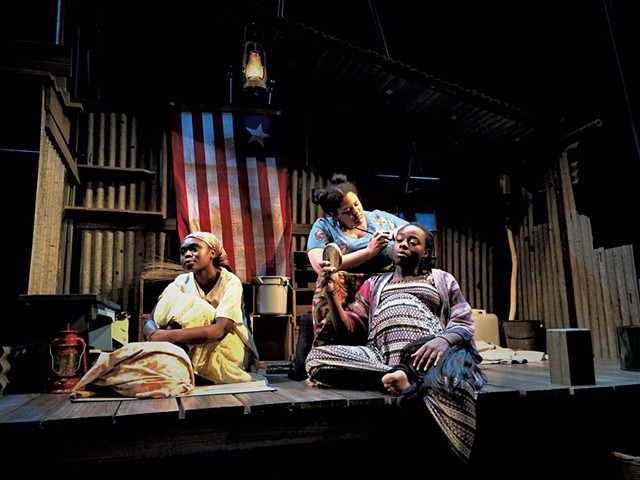 A play opening at Dartmouth College this Friday features five women. But it's not exactly in the Steel Magnolias vein. In fact, Eclipsed touts a cast of five black women, a black playwright — Zimbabwean American actor Danai Gurira — and a black director, visiting artist Miranda Haymon. When the play opened on Broadway in 2016, this pedigree made it a radical departure from theatrical convention. It still is.

Eclipsed is further removed from the feminine sentimentality common in American dramas because it is set during Liberia's second civil war (in 2003), and three of its five characters are captives of a rebel commanding officer. Though the women are fictional, the circumstances are historically plausible.

The setting is described as a bullet-ridden shack on a rebel compound. Bessie and Helena have been captured as "wives," aka sex slaves, for the officer, who does not appear in the play. A 15-year-old called simply "the Girl" has been previously captured and raped.

The fourth woman, Maima, is an AK-47-toting fighter in the rebellion against then-president Charles Taylor. The fifth, Rita, is a peace worker. Both of them have freedom of movement; all of the older women variously try to protect or incite the Girl.

Haymon, who is co-teaching a course on contemporary theater during her time on campus, says that selecting Eclipsed for the student production was a joint effort. "So many black women came forward to audition," she remarks.

At 25, Haymon is barely older than her cast, but her résumé is already substantial. Since graduating from Wesleyan University in 2016, the Brooklyn-based theater artist has racked up a list of directing, assistant directing, workshop and fellowship credits and accolades; she's currently an artist-in-residence at the New York City nonprofit Roundabout Theatre Company. Among her accomplishments this year was an original stage adaptation of Franz Kafka's short story "In the Penal Colony."

Taking time out from rehearsal to speak with Seven Days, Haymon talked about Eclipsed and her efforts to dismantle the patriarchy — at least in the theater.

SEVEN DAYS: A question about the IRL war: If the male commanding officer can capture women for his sexual purposes, how did the female fighters fare in this milieu?

SD: I'm wondering how the fighter women responded to the captured women — to the very idea of women being taken as sex slaves.

MH: Some of the women fighters also committed horrific crimes, including capturing other women. The complicating factor is, how do you find what's best for you [in a war situation]?

SD: How was it possible for the peace worker, Rita, to come and go freely?

MH: The peace women, historically, were able to cease the war, actually staking out government buildings — they changed the course of the war.

SD: I understand Rita is a fictional character, but do you know what organization she might have belonged to?

MH: Rita is Liberian. The peace women wear white scarves and clothes. It's really incredible to see them. There's power in their uniform. But I don't want to ... discredit the power the wives also have.

SD: In 2016, Eclipsed premiered on Broadway with an all-black and female cast, playwright and director. Why was that important?

MH: In this country, our [media] give us a very specific understanding of a war in Africa. We never see the women — holding a gun, in their daily lives, stopping the war. [Eclipsed] allows the story to be told without male presence. Having black women tell the story is incredible. It's important that we are given the power to tell our own stories.

SD: Eclipsed focuses on women caught up in a foreign war, yet their human responses and interactions seem timeless and universal. In your view, how does this work speak to the current state of affairs in, say, the U.S.?

MH: With the power of women. No man comes in to save the day. From the everyday, in history, they save each other. That story of women coming together, surviving for each other, especially women of color, carrying each other and ourselves — I think that's apparent in America, from voting to raising the white master's children as a slave. It celebrates the power of women overall, gives space and voice to a story in terrible circumstances. But it also shows the light of their own personalities and resilience.

SD: How are your student actors at Dartmouth responding to the play?

MH: They're incredible. The play asks so much of the actors, from research to dialect. We've really dived in. I've also made sure that the room is filled with laughter, taking care of each other. It lends itself to the work. Also, it's super important [to the students] being able to see a black female working director. I look like them. We have so much in common. Seeing me do it, they know they can do it, too.

SD: How did your previous directing experience inform how you approached directing this play?

MH: I do a lot of ensemble work — I love working on plays that are truly character-based ensembles. Though I might have final say, I want everyone in the room to have agency. And part of doing Eclipsed is the research — I love that, too.

My hope is that [audiences] will have done some research before seeing the play, or will want to afterward.

SD: Your online bio states that you are interested in "work that dismantles the antiquated ideology of the white, cis, straight, male, able-bodied, middle-class individual as the stand-in for 'universal.'" First of all, thank you! Second, could you elaborate on how you find this kind of work? Does the theater world have more to choose from these days?

MH: Yes and no. More and more plays are being written that don't make "normative" a priority. But I also like adaptations. We need to look at the past, at our white theater ancestors. Through adaptation, you can change the lens, the circumstances [of the story] — it can have so much resonance ... I feel like I have access to new work.

The original print version of this article was headlined "In 'Eclipsed,' Sisterhood — and Survival — Is Powerful"