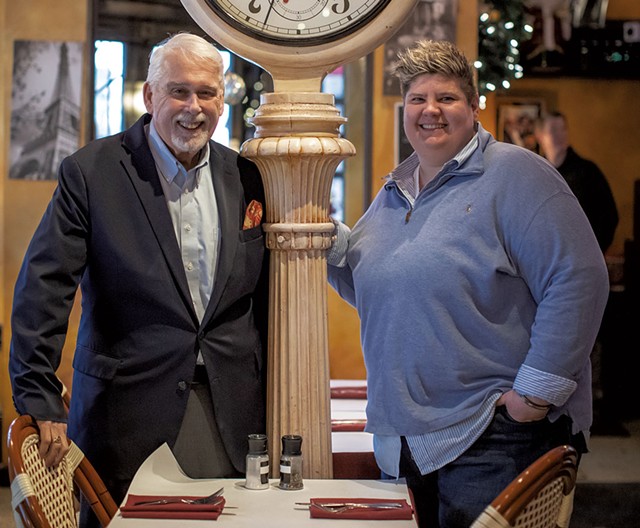 After almost 40 years, including a decade as an owner, Bob Conlon retired last week as general manager of Leunig's Bistro & Café, a mainstay of Burlington's Church Street dining scene. Donnell Collins, his co-owner for the past six years and the restaurant's executive chef, is now sole owner.

The affable, now white-haired Conlon started working at Leunig's close to the 1980 launch of the establishment. He began as a fill-in bartender and then tended bar full time before becoming general manager about 20 years ago.

Conlon described himself as always driven by his appreciation of people: both the customers and the Leunig's team.

"I liked the social aspect. I honestly wanted people to be happy," he said. "About a year ago, I kind of ran out of energy. I didn't have the energy to continue being that person."

He wanted to spend time with his wife, Betsy, who retired almost five years ago. Other than that, Conlon wasn't sure what his retirement would hold. "I'm not a golfer. I'm not a fisherman. I thought maybe I could work in a funeral parlor," he pondered, noting that Irish wakes are a big part of his heritage, and he thinks he has the appropriate people skills.

Conlon has become the face of Leunig's; many have called him the "mayor of Church Street," he said. But he spread around the credit for the long-running bistro's success.

"It's not me; it's all those people who work there," he said. "At Leunig's, we've got people who've worked there for 15 years. We deliver a consistent product, and we take care of customers.

"People are always looking for the next hot trend," Conlon added, "but certain things don't go out of style: classic food and good service."

Collins, 42, does not plan to "rock the boat," she said, acknowledging that Conlon's retirement "leaves big shoes to fill."

Unlike her former business partner, the chef tends to stay behind the scenes, and that won't change. "We have a great team," she said. "No one needs to see me to feel good."

Both Conlon and Collins said that life-size cutouts of Conlon at the Burlington airport have been successful in drawing customers, who can earn a free dessert for taking a selfie with the cardboard Conlon.

"It's totally up to Donnell, but if she decides not to keep it out there, I want it," Conlon said of his likeness.

Collins isn't yet sure of her plans for the cutouts. "Maybe we should have [one] bronzed and put on Church Street," she said.

Collins will host a retirement cocktail reception for Conlon at Leunig's on Sunday, February 9, 4 to 6 p.m. It is open to all.