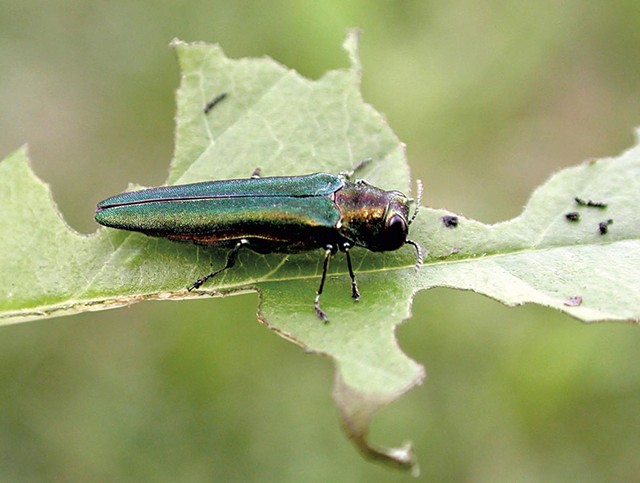 The photo illustrating last week's WTF column was not of an emerald ash borer. This is what the invasive insect looks like.

Having earned a college degree with an emphasis in entomology, I wanted you to know that the photo of the insect in your most recent WTF column ["Why Does the Electric Bill Have an Emerald Ash Borer Charge?" September 2] is actually not of that insect. The ash borer is a beetle of the Buprestidae family. The photo is actually of a tiger beetle — family Carabidae, subfamily Cicindelinae. Tiger beetles are active predators and found in sunny areas with porous, sandy soils.

[Re "A Student's Arrest in St. Albans Fuels Debate Over Public Schools," September 2]: Bravo, Seven Days. The parents and taxpayers have a right to know what goes on in our schools. Unfortunately, the only thing the city of St. Albans accomplished here was educating every kid in the state that all you have to do to get a big payoff is verbally abuse a public official until they lose their cool.

[Re Off Message: "Board Approves Burton's Plan to Bring Higher Ground to Burlington," September 1]: Reading about the Development Review Board approving the permit for Higher Ground, I noticed it said: "The company had agreed to hire flaggers if traffic volumes proved unmanageable after the first 10 events." The DRB has added 20 conditions to be met — what are they?

Why would we wait to see how things are after 10 shows?

It also says members of the public can "weigh in" after six months on how things are going. If the neighbors find the club and the traffic too much, and it's a common problem for them and for local police, has the DRB left those loopholes in the agreement? I've seen the one-lane bridge at Queen City Park Road, and I've heard many complaints about traffic from the residents of Home Avenue.

Or should we wait to see how the first 10 shows go? If traffic piles up on Home Avenue and the one-lane bridge is regularly overwhelmed, should we wait six months? How do people in those neighborhoods feel about this development?

Paula Routly's "College Try" letter [From the Publisher, August 19] is exemplary thinking above exemplary writing. A fundamental of native Vermonters' culture that she has assimilated is: "Vermonters work with you, not for you." That is also the essence of fellow native Vermonter Gov. Phil Scott's pandemic program. Its exemplary success attests to Vermont's uniqueness.

Hooray for the Burlington City Council's Parks, Arts and Culture Committee ["Committee Agrees Artist Should Touch Up Her Downtown Mural," August 17]. And thank you, Gina Carrera, for modeling some stand-up-for-your-rights behavior.

My wife, Lianna, and I always appreciated Carrera's art as we encountered it about town. It's good to hear restoration will occur.

While the Burlington City Council is at it, how about mandating the return of some happiness to the deadly dull walls of the Marketplace Garage, too? We were shocked and offended when Carrera's lighthearted, fantastical denizens of the deep were wiped off those walls without so much as a fare-thee-well.

Art is so common in Burlington, we often don't even see it. That's especially true of murals: There's one on Center Street — by Rachel Nevitt and Spectrum Youth & Family Services — on the backside of Simon's Downtown Quick Stop; there's artfully applied paintwork on the back of the Handy's Service Center garage at the corner of Bank and South Winooski; there's a fabulous face — flanked by matching tsunamis? — on a blocky brick building at Pine and Locust; and there's a waterfront scene on the Lyman Building by Perkins Pier. Not to mention the movable "murals" of the train yard.

There's more around town that deserves preservation. How about it, Burlington? Has anyone done an inventory? Burlington City Arts? I'll do it if no one else volunteers. I started one long ago; maybe it's time to finish it. Tell me where you see murals: donpeabody@aya.yale.edu.

[Re Off Message: "Burlington to Officially Break Ground on Moran Plant," August 18; "Burlington Officials Celebrate as Work Begins on Moran Plant," August 19]: I loved seeing the FRAME project come to be and am glad that Mayor Miro Weinberger — who said it will "transform what has been up until now an eyesore into an iconic landmark" — will now be able to be relieved. Funny, I think the hole in the middle of downtown is a much bigger offender. Not to mention the fenced-off Memorial Auditorium. Bigger fish to fry, Mayor. Bigger fish to fry.

[Re "Tipples To-Go," July 21]: Nobody wants to address the elephant in the room regarding COVID-19 hot spots: public consumption of alcohol. The reason people want to drink socially is to relax, to lower inhibitions and to talk loudly in a noisy environment. That is directly counter to social distancing. The thing state governors, presidents and premiers worldwide are afraid to say is that we need a form of prohibition until a vaccine makes it moot. I'll wager that they don't even want to get caught on video uttering that word.

It does seem unfair that owners of businesses that depend on social drinking should bear the negative consequences, but it is the virus driving reality, not policy.