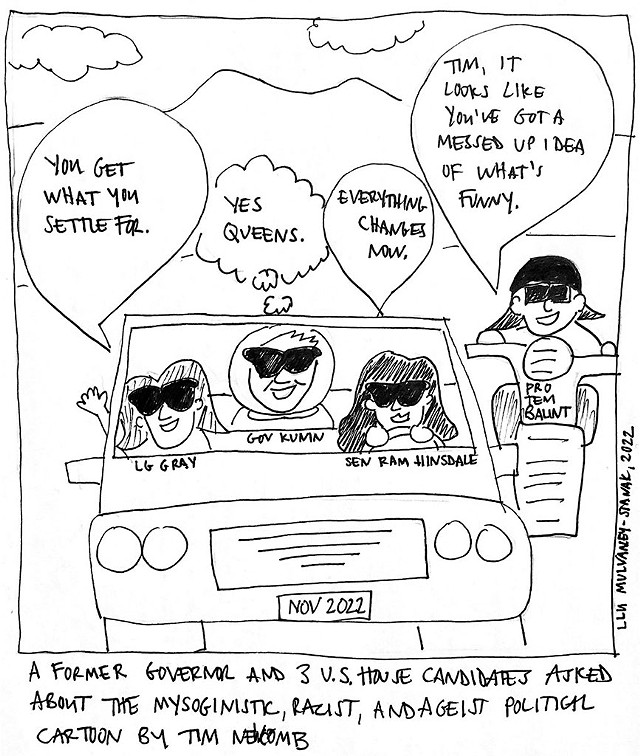 Great article about the Vorsteveld farm ["A Dairy Farm Is Defending a Pollution Lawsuit. Some Say Vermont's Regs Are on Trial," January 19]! This is where some of those funds to clean up the lake should be used — to make a real and timely difference. David Whitney designed living machines at the University of Vermont in 2001, and they could be a real solution to this runoff. Other ideas could include settling ponds or some kind of treatment system before the contamination hits the lake. The trick is not to mandate these things and push the cost completely off on the farms. This issue is something that has been known for years and should have been addressed long ago. It's not too late!

I avidly read Seven Days every week. It is well written, well researched and well supported in the community. I was recently horrified and offended by the lingerie ad on page 19 in the January 12 issue. I certainly appreciate the financial support that this ad provides Seven Days. However, the photograph included has significant sexual overtones, with the look objectifying women. It was particularly startling because it was right below an ad for Girlington Garage, a business run by women in a circle generally run by men. Didn't any of your editors notice this juxtaposition?

I know you have a policy that carefully scrutinizes the content of articles, making sure that all your information is correct and can be backed by sources. What about the content of ads? What is your policy there? For a paper that supports equality and diversity, how did an ad like this get in?

Hopefully the powers that be will ask the lingerie business to select photos that are less sexual and suggestive. Does underwear have to be suggestive? Underwear is a personal choice for comfort and often for feelings of beauty. One person's view of beauty may not be another's. In a newspaper with a wide circulation in many households with children, I would hope that, in the future, the photographs associated with ads will be more scrutinized to align more with the mission of Seven Days.

Editor's note: Censoring ad content is a slippery slope, so we don't do it — unless the client is promoting hate, violence or an illegal product. Seven Days, which targets an 18-plus audience, is a forum for free speech and a reflection of the diversity of desires and beliefs in our community. Sometimes that entails being tolerant of views we might not personally share. Or, in this case, underwear we might not wear.

Regarding ad placement: While some businesses may request a particular spot in Seven Days, our editors, designers and ad reps are on the lookout for offensive or embarrassing juxtapositions. This particular ad spread met our criteria. Some people buy lingerie. Others need auto repair. Some want both.

[Re Off Message: "Scott Says Budget Windfall Presents a 'Transformative Moment,'" January 18]: It occurs to me, having read Gov. Phil Scott's ideas about the budget windfall, that Vermont could carry the concept of exempting military pensions from taxation a bit further.

Despite the beautiful environment and cultural and recreational offerings, Vermont is often cited in publications as one of the "least favorable" places for retirement. Various forms of taxation are generally one of the criteria.

My Vermont-born wife and I recently relocated to a more retirement-friendly state after living, working, playing and paying taxes in Vermont for 68 and 40 years, respectively. We have seen a number of people make similar decisions over the years.

We would surely have reconsidered our move had the economics proved more favorable to our situation.

Many retirees spend considerable amounts on various forms of recreation, entertainment and consumer goods. Vermont may be well advised to examine this trend of economic exodus more closely.

["Fave Little State," January 12] pointed out some of the trade-offs of Vermont's newly acquired climate migrants but only hinted at the serious ramifications.

Vermont is in need of diversity. It will benefit our state. Every benefit has a cost. This article showed an unwanted consequence of climate migration. The new folks to Vermont have new jobs. One is working for the environmental group Standing Trees, and another is with Wilderness Watch. I am sure these are nice folks dedicated to saving Vermont. The article explains concerns about new folks needing housing and the resulting conversion of forests into house lots. More people can mean fewer forests.

The scariest thing is the efforts by the organizations they work for to set aside large portions of Vermont from logging and long-term forestry. This will put stress on forest businesses and forest landowners. A smaller forest resource base will harm the working landscape, causing a loss of forest industries and forest jobs. That makes forestland less capable of being held for long-term forestry and more valuable as house lots. The result will be fewer forests. The working landscape will be transformed to suburban sprawl. This is very bad for the climate.

We should welcome diverse opinions, but just look at southern New England to see our future if these climate migrants are an example. I fear we are seeing the beginning of the end of our rural, forested state. It would be nice if new residents took the time to get to know Vermont and understood the conservation benefits of the working landscape.