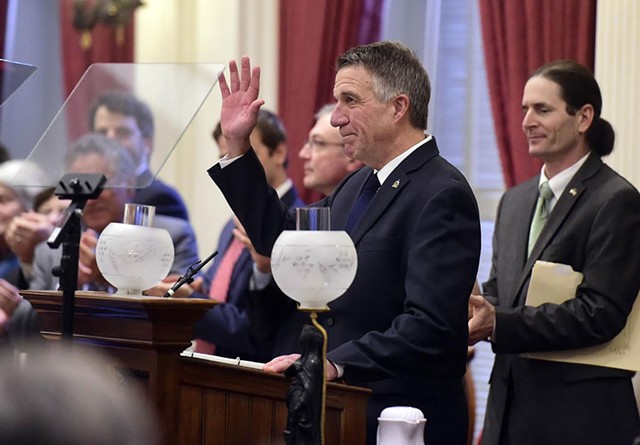 If you created a word cloud of Gov. Phil Scott's collected speeches, "affordability" might be the biggest word of all. It's the foundational premise of his administration: Vermont is too darn expensive, and that depresses our economy and hinders population growth.

But the governor has a narrow vision of affordability; he views it mainly in terms of taxes. Vermonters can't afford to pay more of them, he says, so he is drawing the line on tax and fee increases — especially a pending eight-cent rise in the statewide property tax.

"We cannot let that happen," he said in his State of the State address, delivered on day two of the new legislative session last Thursday. "Vermonters can't afford it, the state cannot sustain it, and I cannot accept it."

At the same time, however, Scott said little or nothing about other costs hitting Vermonters in the pocketbook. Blue Cross Blue Shield of Vermont has won state approval for a 9.2 percent hike in health insurance premiums. Two days after Christmas, Green Mountain Power was given the OK for a 5 percent rate increase. And the newly enacted federal tax cuts will seriously scramble Vermont's tax system, creating big winners and big losers in the state.

The price of electricity and federal tax reform were absent from the State of the State speech. Health care got a quick mention, with no specific reference to rising premiums or prescription drug prices.

"A dollar out of a Vermonter's pocket is a dollar, no matter where it goes," noted Sen. Chris Pearson (P/D-Chittenden) at a Statehouse press conference last week. "We have the ability to influence all three — taxes, health care and utility bills — and yet the governor is silent on the majority of those issues."

Mike Smith, host of the call-in show "Open Mike" on WDEV radio, says property taxes are not high on the list of listener complaints.

Is the governor's affordability vision too narrow, too focused on the public sector?

Not at all, according to Scott spokesperson Rebecca Kelley. His priorities, she wrote in an email, are based on the areas "where the administration has the most control" — that is, taxes and spending.

As for other factors, Kelley said Scott would like to see any increases in property taxes, utility rates and health care costs kept at an affordable level. She noted that current "regulatory systems ... guide and restrict what can be done on cost containment" in areas such as electricity and health insurance.

Kelley provided a letter Scott penned in response to constituent complaints about the GMP hike. He wrote that he was "very disappointed" in the outcome but asserted that it was the best result possible in the current regulatory system. He criticized current law for ensuring utilities full coverage of their costs — plus a profit margin of "about 8 to 10 percent each year," and argued that regulators should prohibit rate increases higher than growth in wages and the economy.

That would require a fundamental change in the law, and the utilities' screams would be heard all the way to Brattleboro.

Similarly on health care, Kelley says the administration is focused on reforms "to keep people healthier and moderate costs." Fine, but there's no resistance from him to what's happening now with insurance rates or prescription drug prices. If nothing else, Scott could make use of his bully pulpit on health care, utilities and other immediate pressures — just as he does on taxes.

Dealing with federal tax cuts is a huge issue that's only beginning to gain traction in Montpelier. Legislative fiscal analyst Graham Campbell told a House committee last week that changes in the federal tax code mean that households with incomes between $80,000 and $200,000 were likely to see their state taxes go up — and that's precisely the professional, upper-middle-class sector that Scott wants to summon to Vermont.

"The administration will look to mitigate potential negative impacts due to federal reforms," Kelley says. But doing so might put the governor in a philosophical box. If Vermonters get a tax cut from the feds, can they afford to pay more to the state?  Should those who have to pay higher federal taxes get a break from the state? If so, how do you compensate for lost revenues?

And in a dynamic situation with plenty of unknowns, do you try to hold everyone harmless? If not, who wins and who loses?

There's also a fundamental irony in Scott's perpetual hammering on taxes. Virtually none of his proposals would deliver lower taxes to Vermonters. He has often sought to shift funds from one part of government to another, but rarely has he called for actual tax cuts.

Democrats and Progressives have their own definition of affordability. "If you ask any legislator if affordability is a prime interest, they'd all say yes," Senate President Pro Tempore Tim Ashe (D/P-Chittenden) said in a meeting with reporters last week. "That touches on everything from health care to utilities to education to general taxes and the cost of goods. [The goal is to] make sure that people of all incomes can live a decent life here."

For top lawmakers, that includes providing paid family leave and raising the minimum wage. Those measures would directly impact affordability for low-income Vermonters — but Scott warns that they would lead to job losses and competitive disadvantages. His vision is essentially a rising tide that lifts all boats, and his policies are aimed at encouraging the tide to come in.

Finally, there's a longer-term vision of affordability that involves investing now for a better future. For example, the Scott administration opposes any new revenues to pay for a costly, 20-year, federally mandated water-quality improvement effort but has yet to suggest a funding source of its own. Advocates say further delays will only increase future costs.

But the administration's focus is on holding down immediate costs and waiting for the tide to come in. Scott argues that if Vermont builds a strong economy, we'll be able to pay for all that stuff with the resulting tax revenues — and if we add costs now, we may never get to that bright, prosperous future.

That's a very big bet on the rising-tide theory. And if it doesn't work, then we'll be stuck in the mud.

Almost exactly one year after his caucus gave him the boot, Sen. Joe Benning (R-Caledonia) has returned as Senate minority leader.

Last January, his colleagues voted to oust him from caucus leadership in favor of Dustin Degree, then a senator from Franklin County. But in November, Degree resigned from the Senate to take a job in Gov. Scott's inner circle.

Which left Senate Republicans without a leader. And, well, there are only seven of them, so the pickings were slim. By rule, no committee chair can lead a caucus, which eliminated Peg Flory of Rutland County, chair of the Institutions Committee. Three relatively new senators, David Soucy of Rutland County and Carolyn Branagan and Randy Brock of Franklin County, were deemed to be lacking in seniority. Benning said two others, Richard Westman of Lamoille County and Brian Collamore of Rutland County, weren't interested in the job.

Only Benning was left.

His ouster last January was triggered, in large part, by the Norm McAllister scandal. After McAllister's 2015 arrest on sexual misconduct charges, Benning consistently called for his removal from the Senate — a stance that alienated McAllister supporters in the caucus.

"There were communication problems," Benning said this week. "The situation in the caucus is healthier now."

That's not unusual. What was odd was who sent the release: VTGOP staffer Benjamin Garrow — not the party's executive director, Jeff Bartley, who hasn't issued a press release since mid-December.

"All I can say is that we have met on a personnel issue," said Rep. Janssen Willhoit (R-St. Johnsbury), a member of the party's executive committee. "As an organization, we have decided not to say anything about it."

The party is notoriously short on paid staff, so there aren't many options for the subject of the "personnel issue." And no one contacted for this story was willing to say that Bartley's job is safe.

Bartley has held the post since December 2014, and his leadership has received mixed reviews. The party has continued to struggle in fundraising and grassroots organization, but Republicans have gained ground in the House and recaptured the governorship during his tenure. If the ball club is winning, do you fire the manager?

Since 1935, the Vermont Press Bureau has covered state politics and policy for the Rutland Herald and, later, its sister paper, the Barre-Montpelier Times Argus. For decades it had a staff of three reporters and was considered the go-to source for Statehouse news.

Is this how the venerable bureau ends? Not with a bang, but a wire story?

No, according to Steve Pappas, editor of the two papers.

"The rumors we have given up are absolutely not true," Pappas wrote in an email. "We are just taking an all-staff approach until we can hire the right person as political reporter." The search, he wrote, has included state and national professional outlets, regional colleges, and universities with journalism schools.

Last week at the Statehouse, Goswami was musing about whether he'd managed to kill off the Vermont Press Bureau. Quite the opposite, Neal; you're just a tough act to follow.