Seven Days receives loads of album submissions, but Glenn Weyant's MOWED MUSIC is the first to feature nothing but a lawn mower. The record consists of a single 30-minute track in which the East Montpelier sound artist's gas-powered Toro mower is the lone "instrument." With his mower "roughly tuned to B-flat," according to the album cover/liner notes, the resulting recording emphasizes "tonalities and harmonics of distance, direction and so on." Also the occasional mowed-over stick.

JORDAN ADAMS: According to its Bandcamp page, MOWED MUSIC deconstructs "harmonic contextual relationships explored and reassembled in the lag-time void of pre-neural and post-molecular perceptions." But actually, Weyant just set up four microphones around his yard, fired up his lawn mower and called it music. I can push myself pretty far outside my comfort zone, but this just seems like a post-hoc elevation of a weekly chore. What meaning, if any, do you extract from this?

CHRIS FARNSWORTH: The short answer is, too much. When faced with a sort of tabula rasa of a record like MOWED MUSIC, you can either go all in or all out. My guess is 99.9 percent of people will choose the out door after a few minutes of listening to, you know, a lawn being mowed. But for the rest of us — aka those who are actually paid to listen to stuff like this — there are things that can be extrapolated.

The easy in for the record would be to consider it a sort of autonomous sensory meridian response (ASMR) experience. Every night when I go to sleep, I tee up YouTube and pass out to the sound of starship engines idling, sampled from "Star Trek: The Next Generation." (Hey, whatever works.) I can see a small but dedicated group of people who find the sound of a lawn being mowed incredibly relaxing. Maybe they have mower parties? They just swallow some Ambien, turn on their John Deere and drift off. It's 2021, man, don't tell me you couldn't see it happening.

Still, I'm convinced there is a deeper meaning to Weyant's mower music.

DAN BOLLES: I firmly believe that when an album comes into your life is as critical to its impact on you as how good it is. It's why Being There is my favorite Wilco record, even though I know that Yankee Hotel Foxtrot is objectively "better." (At the time, cigarettes tasted so good, and I was so misunderstood.)

Speaking of dad rock, let's talk lawn mowers. Last fall, I bought a house with nearly two acres of lawn to mow, then I got a Cub Cadet XT1 riding mower. I now spend an absurd amount of time either mowing my lawn or thinking about mowing my lawn. And yeah, I've googled how to mow checkerboard patterns.

Point is: Mowing has become both a blessing and a curse. On one hand, carving out time to do the job every week is a pain in the ass. On the other, actually mowing is two uninterrupted hours of Zen. So if ever MOWED MUSIC was going to enter my life and leave a mark, now is the time.

JA: Weyant explains the meaning of MOWED MUSIC in the liner notes/site map/album art. The map shows a rough sketch of the concentric circles that denote his path around the space, passing each of his four microphones at different distances as he clears more grass.

But, as David Letterman would say, "Is this anything?" To me, it's all incidental, whereas much of Weyant's other work is intentional. For instance: his recordings at the U.S.-Mexico border wall, which were featured on a 2006 broadcast of NPR's "All Things Considered."

"I would love to set up a day where people from the U.S. side, [and] musicians on the Mexican side would agree to meet on either side of that wall and then start playing it, to actually join together and take this wall and demolish its concept, remove it as a wall," Weyant said in the broadcast.

At the wall, he makes a gnarly sound that's interesting, stimulating and, most relevantly, doesn't exist unless he decides to make it. Even without explaining his intentions at the wall, it's obvious that Weyant wants to make something beautiful out of a symbol of hate. Presumably, his mower makes the same sounds, whether he calls it art or not.

CF: It's funny, but now that I'm thinking about Dan's admission of lawn-mowing Zen, I think I can see (maybe) where Weyant is coming from with this record. If the intention with his border-wall recording was to make something lovely out of the ugly, perhaps this is an attempt to lock a specific vibe in amber.

To be clear, I believe that he definitely wanted to experiment with tone, distance and harmonics, and much of his mission statement can be attributed to the far-ranging curiosity of a man with a highly musical mind. Jordan isn't wrong, though. I think it's fair to listen to this and say, "But whyyyy?" 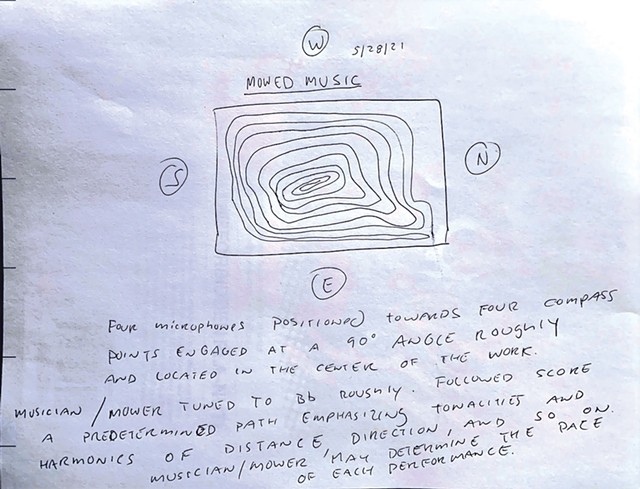 But the more I listen, the more I feel like someone who saw "Twin Peaks," didn't get it, but kept watching until it started to make some sort of sense. Like, right around the 9:20 mark, Weyant's trusty Toro hits a stick or something and I'm convinced it could be to ambient music what Phil Collins' drum fill on "In the Air Tonight" is to rock. When the mower hits that stick, I envision an arena full of ambient fans all nodding in silent satisfaction. Maybe one of them, overcome by the sound of the blades snapping the wood, even goes so far as to whisper a "fuck, yeah" before being shushed.

What if our Western minds are just not properly processing ambient sounds as music? I legitimately lose sleep over this idea. I met a science fiction author once who told me he believed trees and rocks communicate using what we hear as ambient sound. That every time we hear wind blow through branches, there's language encoded in those noises. Yes, we had both just smoked a joint, but that's not the point.

Are we missing an entire language, an entire form of music we don't recognize? Maybe Weyant is more attuned to this than we are. Maybe when he hears his mower played back to him in quadrophonic sound, he hears a symphony.

DB: Did you guys see the story about Italian artist Salvatore Garau, who recently sold an invisible sculpture for $18,000? As he explained, presumably with a straight face, the sculpture isn't "nothing" — it's a vacuum. "The vacuum is nothing more than a space full of energy, and even if we empty it and there is nothing left, according to the Heisenberg uncertainty principle, that 'nothing' has a weight," Garau said. "Therefore, it has energy that is condensed and transformed into particles, that is, into us."

That our boy Sal was able to parlay that mumbo jumbo into a cool $18K is, of course, ridiculous. But he does sorta have a point. If the sucker who bought the sculpture believes they bought condensed energy particles that are now beaming through them, who's to say they didn't? Likewise, if Weyant does indeed hear a symphony in B-flat mower on his Toro, who are we to rob him of that splendor in the grass?

JA: I had not heard about this, Dan. But I did hear a story about an emperor who got some new clothes this one time.

I think you both make good points about context and perspective. Even if I think MOWED MUSIC is kind of silly, I'm glad Weyant submitted it, because it turned me on to him as a creator and his bountiful library. MOWED MUSIC is his 148th Bandcamp upload, by the way. I think I might be the kind of listener who can get more into abstract work in person. Maybe I should sit blindfolded in the center of Weyant's yard so he can give me the live show.

CF: I think you're on to something with this, Jordan. I was wondering last night how someone could do a record release for something like this. I envisioned four microphones onstage at Higher Ground surrounding Weyant and his mower. Maybe it's on a patch of Astroturf or something. There are definitely some fog machines doing their thing. Throw in some lasers...

But, no, it would be so much cooler as a one-on-one experience. You buy a ticket, go to Weyant's yard, put the blindfold on and sit at the nexus of the mowing sounds. I legitimately know several people who would microdose just to do this.

(Note to Weyant if you're reading this: If you actually do an album release for this, I will 100 percent be there and cover it. Allergies be damned.)

DB: As I gaze out upon the quiet, pastoral majesty of my incessantly growing lawn, I'm struck by a question related to yours, Chris: Does Weyant do house shows? If so, I can envision an entire seasonal series that I would gladly pay money to see him perform at my house on a weekly basis: Symphonies for String Trimmer, Leafblower Lullabyes and Snowblower Sonatas.

In all seriousness, there is artistic value in experimenting for experimentation's sake. Is MOWED MUSIC something most people will want to listen to? Doubtful. But it doesn't need to be. The mere fact that someone looked out at an unkempt lawn and not only wondered what it would sound like to record but then actually did it is laudable.

MOWED MUSIC is available at sonicanta.bandcamp.com.

The original print version of this article was headlined "Talk It Out: 'MOWED MUSIC' | A discussion of East Montpelier sound artist Glenn Weyant's lawn mower record"