DAN BOLLES: So, Eric George went and made an entire album inspired by, of all things, Harry Potter. I have a lot of questions, but let's start here: What's more surprising, that the guy who will probably have written three new records in the time it takes us to have this discussion — and will have hand-printed the album booklets with a quill pen on paper he made himself and stitched together with yarn — wrote an album inspired by the Boy Who Lived, or that Lily Died for Love is really good?

KRISTEN RAVIN: I'm not surprised that Eric embraced a concept for this album. He's usually got a specific idea driving his collections, be it protest songs, a punk project or, in this case, kid wizards.

What did surprise me was how the themes Eric highlighted struck me, even though I'm not a fan of the series. I hear lyrics about bigotry, parental sacrifice, inequality in education, and moral and ethical obligations.

(Full disclosure: My exposure to HP is limited to hearing my little brother blast the audiobooks from his childhood bedroom when we were growing up. However, I have seen enough memes to know that Neville Longbottom — best name ever — grew up to be hot.)

CHRIS FARNSWORTH: Unlike Kristen, I'm all about that Potter life. (House Ravenclaw, thank you very much.) But when I first heard that Eric — whose work I like — was making a HP-themed album, I felt like shaking my head and harrumphing, "This is no time for wizards, bro." The world is straight-up plummeting into shit town. So, in my mind, we need bards like Eric to speak truth to power and write songs about the Panama Papers, late-stage capitalism or why I still don't really like the new Tame Impala record.

Instead, we get Lily Died for Love. And, of course, it was exactly what I needed.

KR: Chris raises a question I also have about Eric's timing: Is there a need for an album inspired by a fantastical children's series during a pandemic? My instinct says yes. Eric announced the April 1 release date on Instagram on February 22, before shit really hit the fan in Vermont. I'd be interested to know if and how the current state of the world has reshaped Eric's view of this work and what it means to listeners.

BTW, is there a name for HP stans? Pott Heads? 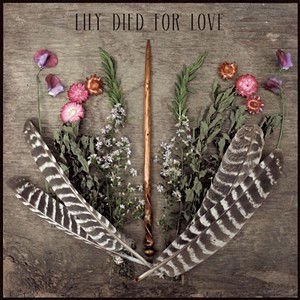 JORDAN ADAMS: Chris, to quote one of my favorite TV shows, "Crazy Ex-Girlfriend," when people say they're Ravenclaw, they really think that they're Gryffindor, but they don't want to sound braggy. (Total Hufflepuff over here, by the way. They were the stoner house, right? The true Pott Heads.) Personally speaking, I don't go to music to reinforce my politics. I'm more likely to be absorbed by an album that borders on expressionistic — in this case, a fine, stylistically dynamic collection of tunes that use Harry Potter touchstones as a jumping-off point to explore different shades of humanity.

CF: But there's no doubt that Eric George is Gryffindor, right? I got 40 seconds into this album, and I fucking knew it. As soon as he sang, "Dying doesn't let the love let up" — which absolutely wrecked me — I knew it. Ten points, Ravenclaw! (Ravenclaw, Jordan.)

DB: Why are we so sure Eric belongs to one of the "good" houses? Gryffindor doesn't have a monopoly on goodness or heroism. The most heroic and selfless actor in the whole saga is likely Severus Snape, the head of Slytherin. Both Harry — a parseltongue, no less — and Dumbledore were nearly sorted into Slytherin for their potential greatness instead of Gryffindor, whose primary qualification for admittance is (yawn) courage.

Slytherin, however, prizes ambition, shrewdness and cunning. Any songwriting wizard as prolific, inventive and consistently great as Eric possesses those traits in spades. Also, consider the tenderheartedness he shows on "Draco," a song that conjures empathy for Draco Malfoy — the Barron Trump of the Potterverse. Folks, Eric George is a Ssssslytherin.

JA: I was going to say the same thing about "Draco," Dan. It's a far cry from Harry and the Potters' "In Which Draco Malfoy Cries Like a Baby," which has a bit more schadenfreude to it. And, yes, Harry and the Potters is exactly what you think it is. There's a whole wizarding world of HP-related music projects out there. Lily Died for Love stands out because it's accessible to Muggles like you, Kristen.

KR: Totally! I'll give this album plenty more listens after this conversation is over. I'm an Eric George fan, and I like that his instrumentation has become more dynamic over his last few releases. Eric's early albums are acoustic-guitar-driven. But here he brings in keys, accordion, strings and drums in addition to his guitar work, and he makes it sound easy. I love rock-and-roll Eric.

Earlier I mentioned some of the themes that spoke to me. A question for you Pott Heads (seriously, is there an actual word for the HP Beyhive?): Does Eric put forth any interpretations that might stir up controversy among fans?

CF: I sort of wish he did, but I didn't find anything controversial in the lyrics or themes. That's not due to any lack of artistic bravery on Eric's part, but rather the universal themes of the story itself. I know there's some stuff online about Rowling maybe not being as tolerant as she comes off, but the story itself leaves no bones. Love is all, which is a theme embodied by Lily Potter and her (ultimately sacrificial) love for her son, Harry. Eric's understanding of the power of that theme suffuses the record.

And, yes, give me rocking Eric George all day. "What Is Right, What Is Easy" is a full-on blues-rock ripper, with a sprinkling of that 1970s SoCal magic Eric has in his back pocket. If there's anything controversial about Lily Died for Love, it's how applicable Eric can make blues-rock to teenage British wizards.

DB: So, to sum it up: Lily Died for Love isn't just a great Harry Potter-themed record, it's a great record, period. We still have no idea what to call Potter fans. (Wanndabes? Quibbitches?) And rock-and-roll Eric is a goddamn wizard who could probably be a Gryffindor or a Slytherin. Did I miss anything?

CF: If Eric turns out to be a Hufflepuff, the internet is going to crucify us. All the Potterists will boycott the paper. Potterpeeps? Harry Palmers? (Not that last one, sorry, I googled the wrong Harry Potter, um, parody.)

My final thought is that I hope Eric starts the weirdest trend in Burlington music history, and next month we see Francesca Blanchard's Dune-themed EP drop, followed by a Henry Jamison and Caroline Rose duet about the work of Ursula K. Le Guin.

KR: Dumbledorks? Wiz Kids? Whatever. Creating an album inspired by something that many, many people already love could come off as a cheap bid for Instagram likes or a viral video — like when Ryan Adams made that Taylor Swift cover album. But not the way Eric did it. As Jordan said, he gets at the humanity hiding under the cloaks and spells in a way that's pretty moving, and might even inspire me to pick up the first book.

JA: Kristen, neither an invisibility cloak nor the words "expecto patronum" will shield you from the Potterverse once your daughter reaches mid-grade school. Regarding Lily Died for Love, George exceeded my expectations for listenability and execution. And I love the nods to his long-running Radio Bean honky-tonk sessions on the in-universe protest anthem "Fountain of Brethren." Plus, it not only shows us what a Harry Potter nerd George is (I actually had to google "fountain of brethren"), but it reinforces the politics he put forth on his 2018 album, Two Hands // Songs of Resistance.

This discussion has been edited and condensed for clarity and length.

The original print version of this article was headlined "Talk It Out: Lily Died for Love by Eric George | A discussion on the Burlington country songwriter's ... Harry Potter record?"