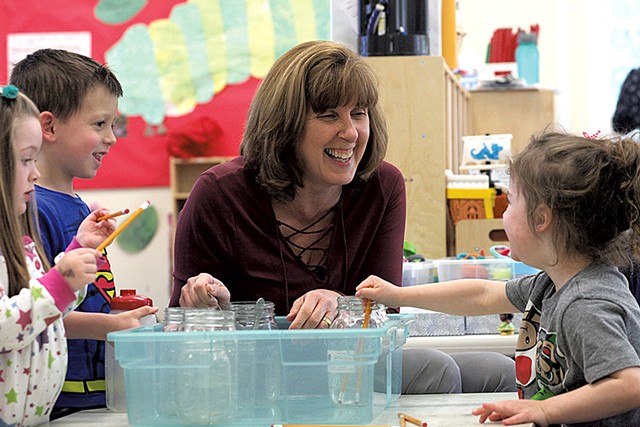 Trisha Scharf had never met her state representative until she traveled to the Statehouse on Good Friday and introduced herself to Rep. Linda Myers (R-Essex).

"I'm here to give you my story," the Essex resident told Myers as they sat at a Statehouse cafeteria table. Scharf was armed with a folder full of petitions that she presented to Myers.

Scharf runs Children Unlimited childcare center in Williston. She and her staff of 14 have charge of 55 youngsters on a typical weekday.

"It's increasingly difficult for us to attract good [employees] and keep them," Scharf told Myers. "I have waiting lists like you wouldn't believe. I have parents literally sitting across from me and saying, 'When can I get pregnant?'"

Scharf has been in the childcare business for decades, but lobbying lawmakers is new to her. For that, she has a team of people helping her.

Scharf is one of scores of providers and parents mobilized by a three-year-old effort called Let's Grow Kids. Its mission: to persuade Vermont to invest more state dollars in early childhood programs that experts believe can be critical to a toddler's chances of succeeding in school and later in life.

This year, the group is pressing lawmakers to add up to $9 million in childcare subsidies for low- and middle-income families in hopes of improving access to and the quality of daycare programs.

Let's Grow Kids has run a well-funded, formidable and textbook lobbying campaign: collecting signatures at farmers markets and town meetings, spending thousands of dollars on television ads, and organizing one-on-one meetings with leading politicians. During last year's election campaign, the group asked all state candidates to describe how they would solve Vermont's childcare problem, then posted their answers in a searchable online database.

It's unclear whether any lobbying campaign aimed at claiming more state dollars can succeed in 2017. Lawmakers insist the budget cupboard is bare.

Legislators rejected Scott's proposal to shift $9 million from K-12 spending to childcare programs, and the House included no new early ed money in its budget. Last week, the Senate Appropriations Committee came up with $3 million for childcare subsidies as one of its final budget decisions. Lawmakers and the governor will haggle over the final figure in the next couple of weeks.

Win or lose this year, Let's Grow Kids staff make clear that theirs is a campaign to transform public understanding of what society can do to enrich children's first five years.

Let's Grow Kids is an arm of a longer-term campaign by the Permanent Fund for Vermont's Children, founded in 2000 by developer Rick Davis and investment banker Carl Ferenbach.

The fund gets its name from its goal: to permanently change Vermont for the better. Davis is convinced that the best way to do that is to make quality education available from infancy.

From 2000 to 2015, the fund provided money to help launch community prekindergarten programs around the state. Those programs made it easier for Vermont to establish its 2014 universal prekindergarten law, which promises all 3-, 4- and 5-year-olds access to at least 10 hours per week of publicly funded pre-K.

Davis found that despite those efforts, 47 percent of Vermont infants and toddlers lacked access to quality, regulated childcare. So, in 2014, he launched Let's Grow Kids to "laser focus" on changing that.

"Everybody knows we should invest early to save money down the road," he said. "We've zeroed in on this one thing where we can have the most impact."

Davis, whose bushy gray eyelashes hang over his eyes like awnings, looks at the investment in early education like the businessman he is.

"This is an economic development strategy," he said. "We've got to find ways to get young families to come to Vermont and stay."

Davis has facts to back up the value of his investment.

The brains of children from birth to age 3 are rapidly making neural connections, so a lack of stimulating care is a huge missed opportunity, Permanent Fund CEO Aly Richards emphasized.

A Vermont Blue Ribbon Commission for Affordable Child Care report last year noted that every $1 spent on high-quality early care yields a return of $4 to $9.

Yet too many Vermont families can't find or afford quality care, Richards said. The average annual cost for infant care in Vermont ranges from $8,087 to $11,513.

The state provides childcare subsidies for 8,000 kids per day, but those subsidies are based on 2008 market rates and rarely cover the full cost, said Department for Children and Families Deputy Commissioner Reeva Murphy.

Let's Grow Kids wants to boost those subsidies to the 2015 market rate, which would cost an additional $9.3 million per year.

Other groups have long discussed and advanced efforts to improve access to early childhood education in Vermont. What Let's Grow Kids adds to the mix is resources.

The Permanent Fund's leaders plan to spend $3 million to $5 million a year through 2025 on the effort to boost access to affordable, quality care, Richards said.

The group has access to that kind of cash. The Permanent Fund reported $18.8 million in assets to the Internal Revenue Service in 2015. The fund spent $5.2 million on its efforts that year. and raised $3.2 million in revenue.

Where does that money come from? Mostly long-term donors interested in funding high-impact programs in Vermont, Richards said. The New Jersey-based Turrell Fund and the Vermont- and Florida-based A.D. Henderson Foundation are top donors, she said. So are the Boston-based High Meadows Foundation and the Johnson Family Foundation in New York.

In tiny Vermont, that campaign feels almost like an armada. Let's Grow Kids boasts a staff of 15 employees, including experienced grassroots organizers who've earned their stripes on other projects.

Richards was instrumental in establishing universal prekindergarten as an aide to former governor Peter Shumlin.

Her deputy director, Sarah Kenney, worked for more than a decade as a lobbyist advocating for victims' rights.

The push for quality, affordable childcare is personal for each of them. Freedner-Maguire has three youngsters in childcare. Kenney said she was never able to land a slot for her son when he was an infant and instead cobbled together care with help from family.

Richards said, "I'm trying to fix the system so I can have kids."

Fixing the system means executing a patient, well-organized effort that Freedner-Maguire said is akin to the Freedom to Marry campaign. Let's Grow Kids is building a network of supporters to take their case to lawmakers in Montpelier.

Before Scharf sat down with Myers in the Statehouse cafeteria, she'd been to several Let's Grow Kids training sessions. Experienced advocates taught her how to speak up, armed her with information and connected her with Myers.

"It helped me, in part, gain confidence," Scharf said of those lessons. "We know kids. We don't know how to organize."

She told Myers about some of the challenges she faces. Just that day, she had interviewed a soon-to-be college graduate who asked for $17 an hour.

Persistent advocacy also helped win over the pro-business governor. When the Let's Grow Kids staff first met with gubernatorial candidate Scott last year, "this was not on his radar," Freedner-Maguire said.

Later in the campaign, that changed, she said: "He said, 'You don't have to tell me. I heard about it in every corner of the state.'"

Scott said the concern was not new for him but conceded that his interest in providing new funding for childcare subsidies grew with time.

Even as he pledged to hold down spending and avoid tax increases, in his January budget address Scott proposed shifting $9 million from K-12 school budgets to boost childcare subsidies. The idea didn't get very far, as Democratic lawmakers considered the shift ill-timed and unrealistic.

As she pulled mail from her Statehouse box on a recent afternoon, Nitka rolled her eyes at yet another piece of literature targeting legislators and bearing the group's logo. She feels bombarded by its TV ads, she said.

She wondered if the money spent on the campaign would be better spent directly on childcare. "I'm interested to know what Let's Grow Kids is spending on advertising," she said.

In its 2015 IRS filing, the Permanent Fund reported spending $381,416 on advertising and promotion.

Since January, Let's Grow Kids has spent $32,199 on advertising and $17,132 on lobbying, according to an April filing at the Secretary of State's Office. The organization lists 15 registered lobbyists, including its own staff and the Montpelier firm Necrason Group.

For all that effort, the state's budget problems might stymie the push for more childcare money this year.

After her conversation with Scharf, Myers said she sympathized with her constituent. "But where are we going to get the money?" she asked.

The Senate's proposed $3 million would be a big step. But Let's Grow Kids knows the journey will take longer.