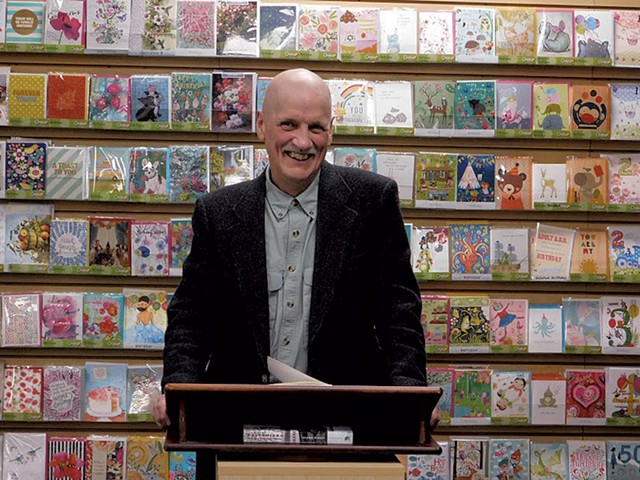 A little more than a year ago, 65-year-old Barton poet Leland Kinsey was in the hospital with what seemed like a death sentence. "It was lymphoma, but a strange presentation. You don't want to hear that from your doctor," Kinsey tells Seven Days by phone.

The seventh-generation Vermonter was rushed to Dartmouth-Hitchcock Medical Center last March after his doctors told him the news. "They put me right in the ICU," he recalls. "[They] said I wasn't going to make it."

Luckily, the doctors were wrong. Today, not only is Kinsey back on his feet, but his collection Galvanized: New and Selected Poems has just been released. It's a timely volume, and a compilation that his publisher, Dede Cummings of Brattleboro's Green Writers Press, thinks is well deserved.

Cummings published Kinsey's last volume, Winter Ready, in 2014. It was his seventh book since 1991. Ever since she first heard Kinsey read at a literary conference in Fairlee two years ago, Cummings says, she has "felt he was a mature poet in terms of volume of work, and it was about time selections of his amazing poems were gathered in one volume for readers to cherish."

Galvanized does just that. Opening with 13 new poems — all consistent with Kinsey's poetic inclinations toward themes of nature, family and Vermont life — the compilation also provides a brief survey of his past works from earliest to latest.

Selections from Northern Almanac, published in 1991 by Catamount Arts, highlight Kinsey's use of the natural world as a vehicle for complex emotions. In "A Day of Rain," for instance, he writes, "You are with me today. / The light on you, / The dull sheen of fruit on the garden trees, / The preening of wet winged birds." Poems from In the Rain Shadow (2004) center on the land and agricultural practices of Tanzania, where Kinsey's cousin worked with Heifer International.

The poet says the process of selecting works from his seven previous books was "fairly involved." Never mind the mountain of material to sort through; some volumes — such as The Immigrant's Contract (2008), a series of linked poems exploring the life of a French Canadian immigrant — were tightly knit, cohesive works. While carving excerpts from such a book is risky, the new presentation remains compelling.

For that daunting process of carving, selecting and reknitting, Kinsey had help from another Northeast Kingdom writer, Howard Frank Mosher. The novelist says he's admired Kinsey's work from the moment he met him — in the classroom. Mosher was the poet's high school teacher.

"He showed me a poem he had written about growing up on his seventh-generation farm, and I [was] stunned," Mosher recalls by phone. "I remember taking it home and showing my wife, and she said, 'Good gracious, this kid should be teaching you!'"

Kinsey didn't do that, but he did go on to teach — just not in a college setting, as many poets do. He spent many years working with the Artists in Schools program in Vermont and New Hampshire.

First, however, Kinsey left home to get a master's in writing at Syracuse University. There he studied with poet Philip Booth, whose best work "centered on coastal Maine," his student notes. "As I worked with him and read more of his works," Kinsey says, "I liked that sense of place. That always interested me, even before I [left Vermont]. And so I realized, well, there's my subject: history, culture, family, landscape, everything I'm interested in. Why am I going to live somewhere else?"

After receiving his degree, Kinsey returned to Vermont, where he wrote poetry not just about but, in a sense, for his home state.

"He writes about a very genuine Vermont, one that's passing quickly," Mosher reflects. "I think the work is important as a cultural, historical and sociological depiction of Vermont life."

It remains to be seen whether Galvanized, or Kinsey himself, will be remembered for that unique vision of Vermont. For now, the poet continues to write from his home in the NEK. He has two new collections in the works.