A new quarterly gets a read on Vermont's foodie scene 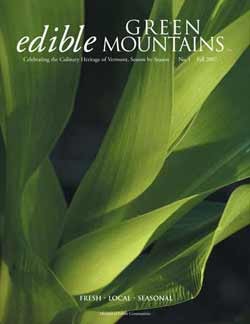 Everyone's heard the stats on Vermont and food by now. We've got more artisan cheese makers per capita than any other state, more farm produce sold directly to consumers, and all that good stuff. But when we aren't eating great food or patting ourselves on the back for doing it, chances are we're . . . writing about it. Seems like there's always a new crop of local foodie reading material, whether it's upscale mag Art of Eating, founded by Ed Behr, or Charlotte's glossy bimonthly Eating Well or the many Earth-friendly tomes on food preservation and gardening that emerge from Chelsea Green Publishing.

So it's almost surprising that it took us this long to get edible Green Mountains. The new quarterly mag is published by Deborah Schapiro and will hit the streets the last week in September. EGM is part of a family of publications collectively called edible Communities, which already includes such far-flung titles as edible Missoula and edible Iowa River Valley. Business and life partners Tracey Ryder and Carole Topalian started it all by publishing a 'zine called edible Ojai in their California hometown, focusing on foods grown or manufactured close by. In the years since, it's spawned about 30 variations. The edible concept, according to the company's website, is to "transform the way communities shop for, cook, eat and relate to the food that is grown and produced in their area."

How does it work? Interested parties pick a territory and sign a "licensing and servicing agreement" with edible Communities, Schapiro says. Unlike many folks who arrange financing through the company, she was able to buy the edible Green Mountain rights outright. EGM's stated mission is "to celebrate the culinary heritage of Vermont."

Oddly enough, 50-year-old Schapiro's path to edible ethics began in front of the Golden Arches. In 1980, after earning an undergraduate degree from Cornell and a Master's in communications from Boston University, she took a job doing PR for McDonald's — a surprising choice for someone who'd followed a strict macrobiotic diet as an undergrad. Even when she worked at the House of Big Macs, Schapiro says, she was a vegetarian.

Besides publicizing 30 Massachusetts McRestaurants, Schapiro was the "Ronald McDonald coordinator," she recalls. "I went around to get kids excited about what today I'd hope they never eat." But, she insists, "At that time, McDonald's actually had quality. I tried to focus on those attributes."

She may have been knee-deep in fast food by day, but by night, the young woman who had grown up with her mom's Hungarian cooking was dipping into haute cuisine. "I took a cooking class at a local high school, and it was with a woman who trained with Madeleine Kamman," Schapiro relates. A twist of fate would bring her to Vermont, where Kamman now makes her home.

"I really wanted to go to chef school, and I was going to go to chef school, but for personal reasons, I moved to Philadelphia," says Schapiro. Although she never realized that dream, Philly offered other ways to delve into fine dining. Schapiro made an off-hand comment to the chef at The Four Seasons that led to a regular volunteer gig. "The first day, I was prepping for New Year's Eve. I worked for 12 hours and absolutely loved it," Schapiro says. She kept it up every Sunday for six months. "I did everything from cleaning 30 lobster knuckles at a time to peeling 10 pounds of shallots," she recalls with a smile, calling kitchen work "invigorating and seductive."

Schapiro also spent time in St. Louis. But in 2004, when her second husband, a doctor, was offered a position at UVM's Fletcher Allen Health Care, "life began," as she puts it. Once in the Green Mountain State, she quickly got involved in the local food movement. "I heard this woman interviewed about food in Vermont, and I was totally captivated," Schapiro says.

The woman was Amy Trubek, then executive director of the Vermont Fresh Network. "I sent them a check," Schapiro recalls. "Eventually I got connected with the organization, and hosted an event at my house with [cookbook author] Molly Stevens."

By this time, Schapiro knew she wanted a career "dedicated to food, somehow." On trips to Boston and Portland, Oregon, she perused the local edible Communities publications. After a few nudges from her friends at the Fresh Net, she decided to buy in. "I put the first issue together in three and a half months," she says with a sigh. "I had incredible support from the Vermont Fresh Network and Molly Stevens. Although we're not officially partnered, I feel a sense of camaraderie and partnership with that organization."

When the first free issue hits the stands — it will be available statewide, thanks to PP&D Distribution — readers will find pieces on local vodka and the romantic Inn at Weathersfield, as well as an excerpt from the soon-to-be-released Cooking with Shelburne Farms by Melissa Pasanen and Chef Rick Gencarelli.

Schapiro whipped up the Weathersfield feature herself, but the rest were penned by other well-known Vermont authors and culinary enthusiasts, including Joyce Hendley of Eating Well, local cookbook author Andrea Chessman and Stevens, a James Beard award-winner. Sean Buchanan of Wood Creek Farm and Vermont Public Television's "Feast in the Making" pitched in. Another writer, Kathy Johnson, "who's not really a foodie," Schapiro says, told the tale of her family's old-timey tradition of pickling and preserving.

With her first issue in the works, the newbie publisher is already looking forward to the January edition. How does she feel now that the whirlwind is over? Just as enthusiastic about local food as ever. "I wish I had another stomach," Schapiro says, "'cause there's so much I want to try."