Legal Pot in Massachusetts Could Spark Legislative Action in Vermont

Election Day ballot initiatives to legalize marijuana in Massachusetts and Maine could light a fire under Vermont lawmakers. Observers say that if voters in those states say yes to pot, as polls suggest they will, it could spur the Vermont legislature to take up the issue — again.

Just eight months ago, the Green Mountain State was poised to become the first on the East Coast to allow residents and visitors to legally use marijuana. The Senate passed a comprehensive bill, and Gov. Peter Shumlin voiced his support. Business groups started circling to get a piece of the anticipated windfall from sales.

"The idea that a neighboring state would be moving forward makes a lot of legislators feel more comfortable with the idea of Vermont moving forward," said Matt Simon of the Marijuana Policy Project, an advocacy group. "Some would say, 'If we're going to have marijuana stores right across the border, we may as well have them in Vermont and reap the tax revenue.'"

"As an economic opportunity, legalized, regulated cannabis is really important, and the world is moving around us whether we choose to engage or not," said Rob Williams, a leader in the Vermont Cannabis Collaborative, a group of entrepreneurs who have planned for its eventual legalization. "There is a competitive-advantage argument to be made, so if Massachusetts ... were to legalize cannabis, that would be eating into that opportunity, I think."

House Majority Leader Sarah Copeland Hanzas (D-Bradford), a leading contender to become Vermont's next House speaker, sounds a lot less reluctant than she did last year. Speaker Shap Smith (D-Morristown) was never pro pot, either. "I will suggest that we move forward with a legalization plan in Vermont," said Copeland Hanzas, clarifying that her proposed agenda is contingent on what happens in Massachusetts. "I will push for it this year if the referendum is approved."

In Massachusetts, a Boston Globe poll released last week showed voters support a legalization ballot item 55 percent to 40 percent — even though the state's governor, attorney general and other influential leaders oppose it. If the Bay State ballot item passes, marijuana would be legal on December 15, 2016: Adults could keep up to 10 ounces, and six marijuana plants, in their homes, and carry less than one ounce in public. Retail pot sales, governed by a state commission, would be allowed by January 2018.

A recent Portland Press Herald poll showed that support for a similar ballot item in Maine is running 53 percent in favor to 38 percent against. If Mainers vote that way, adults would be allowed to possess up to 2.5 ounces of cannabis and grow their own plants — just 30 days later. Licensed retail stores and marijuana social clubs could operate in municipalities that approve them.

Arizona, Nevada and California residents are also voting on Election Day ballot items that would legalize recreational marijuana in those states.

By waiting, Vermont may have missed its chance to reap the financial benefits of being the first in the Northeast.

A RAND Drug Policy Research Center report issued in January 2015 found that if Vermont legalized marijuana and no other nearby states followed suit, the state could generate between $20 million and $75 million annually just from Vermonters.

The population of marijuana users living within 200 miles of Vermont is nearly 40 times the number of users in the state, RAND concluded. They spend $5 billion a year on marijuana, compared to the $125 million to $225 million that Vermonters pay for pot annually.

The state would receive "hundreds of millions" from out-of-staters, the report said.

That scenario is no longer likely.

Senate Judiciary Committee chair Dick Sears (D-Bennington) expressed some regret that by putting the kibosh on legalization last year, House members may have cost Vermont the chance to realize the largest financial gains.

"I'm not going to say it's frustrating, but it makes me wonder. There were so many House members who out-and-out opposed it and I don't think they saw what was coming," Sears said. "There's still an opportunity to pass something in Vermont, but obviously the projected revenues wouldn't be there." 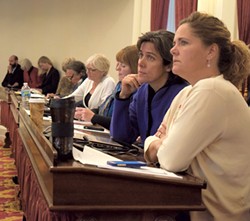 Copeland Hanzas said House members were never motivated by money. "I don't think anybody feels strongly that we ought to be going first for economic gain. If we're going to do this, it's because it's the right thing to do," she said.

So why wait? Sears seemed to be asking. The Bennington County senator pointed out that Vermont could still catch up to Massachusetts: Vermont state agencies have already studied how they would regulate marijuana sales and could have a retail scheme up and running by next July, he said.

"The mechanics have already been studied," Sears said. "[The departments of] agriculture, public safety, education, health — they're fairly well geared up from last year."

Sears said he would be willing to push for marijuana legalization again this session but would prefer to see the House take the lead. In lieu of approving a legalization bill, last May state legislators appointed a study committee that has been taking testimony on marijuana issues since September. It is scheduled to make recommendations to the legislature after Election Day.

Talk of nearby states legalizing before Vermont has come up in those discussions, according to Simon. Even if Maine and Massachusetts move forward, he suggested that there are still neighboring markets for Vermont to exploit.

"New York may be many years away from legalization; the same could be said of New Hampshire," Simon said. "So there would still be significant interest from out-of-state consumers. For many, it may be, 'Well, should I go skiing in Vermont or New Hampshire this year?' And Vermont has legal retail marijuana, so they choose Vermont."

Democratic gubernatorial nominee Sue Minter said she supports marijuana legalization. Her Republican opponent, Lt. Gov. Phil Scott, has indicated he would not sign any legalization bill in the immediate future.

"I'm not saying never," Scott told Vermont Public Radio in June. "I'm saying the timing's not right. It's not now."

That stance helped Scott to win the endorsement of the Vermont Police Association, which remains adamantly opposed to legalization.

Vermont State Police are monitoring the vote in Massachusetts in anticipation of an increase in drugged driving in southern Vermont should it pass, according to Lt. John Flannigan, head of the Traffic Safety Unit.

"Certainly, it's something we would monitor and adjust enforcement efforts as needed," Flannigan said. "We expect when they legalize, we would have people travel between Vermont and Massachusetts, and there will be more use and abuse — that's a concern."

To prepare for possible legalization in Vermont, the state earlier this year trained an additional 10 police officers in recognizing and testing drugged drivers, boosting the total number in Vermont to 40, Flannigan said.

Even Rep. Maxine Grad (D-Moretown), who runs the House Judiciary Committee that has held up past pot legislation, predicted that legal weed is on the way. Since May, she's been meeting with Sears and other members of the off-season study committee.