Leftist, Militant and Queer: Rachel Siegel is Shaking Up the Burlington City Council 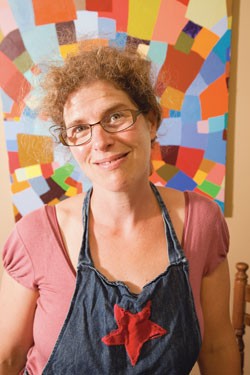 Some city councilors “sit back” their rookie year and let veterans take the lead, observes Burlington council president Joan Shannon. But that hasn’t been the case with Rachel Siegel. Shannon says the Old North End Progressive “came out of the gate running” when she was elected 17 months ago.

Siegel has come so far, so fast, in fact, she’s turned heads at many of the Monday-night meetings. Not so much for her leftist stands on gun control, abortion rights, police accountability, and racial and gender issues as for her explanations of them. Her colleagues tried to look nonchalant, for example, when she argued in personal terms for removing references to “antisocial behavior” from the Church Street Marketplace no-trespass ordinance.

“The times I have felt fear on the marketplace,” Siegel remarked during a February council debate, “is walking down the street holding hands with my girlfriend — and that was not because of antisocial behavior as much as it was because of mainstream homophobia, sexism and racism. She has brown skin and she was transgender.”

Siegel brings “a unique perspective” to the council, notes Ward 6 Democrat Norm Blais. “It’s entirely appropriate on a body made up of all Caucasians and mostly males for someone to remind us that we don’t necessarily reflect everybody in our community.”

But Siegel’s stands and comments can be so radical they set her apart even from fellow Progs. One of them, Vince Brennan, acknowledges “she wasn’t my first choice” when the Progressives were trying to recruit a candidate last year for an open seat they had long held but appeared in danger of losing. “I worried she might be too far to the left,” says Brennan, who holds the other seat in Ward 3.

In the cluttered, comfortable kitchen of her Pitkin Street home, a smiling Siegel acknowledges holding “very strong opinions.” Her decision to run for office arose, she explains, not from a background in electoral politics or even membership in the Progressive Party but from grassroots activism. “I believe I can change the world and make it better,” she says. “And I’d always tried to change it from outside the system.”

Another motivation for running, Siegel notes, was a desire to overcome the obstacle of “internalized sexism.” Whenever she thought about an institution like the city council, “the picture I had was always decidedly male,” she says. “That’s internalized sexism, and I realized if that concept might stop me, I definitely needed to run.”

Siegel, 42, has focused on feminist causes and racial-equity issues, both in her paying work and as a volunteer for numerous social-change groups. She works part-time at Fletcher Allen Health Care, where she coaches medical students on how to conduct pelvic exams. Siegel also teaches dance and gymnastics to preschoolers and imparts carpentry skills to middle-school girls through a program she started at Vermont Works for Women. During our interview, she wore a T-shirt emblazoned with the logo of that program — Rosie’s Girls — named for a fictional World War II-era riveter.

And despite the Shirley Temple curls, Siegel, a frequent weightlifter, does look the part.

She grew up in Burlington’s Hill Section, the daughter of psychiatrist Andrew Siegel and public school teacher Lisa Schamberg — both of whom are now retired. In addition to the “privilege” they afforded her, Siegel notes that her mother and father helped inculcate awareness of environmental and social injustices. “They took me to protests, and we gardened together and canned food. They’re leftists,” she notes, “but I’m lefter than they are.”

A pillar of the local business establishment has also played a major role in Siegel’s life for many years. Pat Robins, who made a fortune by transforming a business-tech start-up into a corporate powerhouse known as the Symquest Group, has been her stepfather since 1988. In addition to affording Siegel entrée to Burlington’s elite, Robins is an exemplar of civic engagement whom she describes as “a blessing in my life.”

As a student at Burlington High School, Siegel joined anti-apartheid protests centered on a symbolic shantytown fabricated on the green at the University of Vermont. But her BHS experience wasn’t positive. “I found the school system oppressive and ended up dropping out,” she recounts. “I also started doing a lot of drugs.”

Siegel says she became an alcoholic as well as a drug addict, but has been clean for the past 15 years, due in large part to “a recovery community I’m part of.”

Because her parents were well off, Siegel says, they were able to send their teenage dropout daughter to the artsy Cambridge School of Weston in Massachusetts. “It was full of misfits like me,” Siegel recalls with a grin.

After making it through prep school, Siegel enrolled in Haverford College in Pennsylvania. She earned a degree in performing arts while teaching at an inner-city school in Philadelphia and “clubbing” at night.

Some of those experiences were reflected in a musical dance-theater piece she directed and performed at the FlynnSpace in 2003. Siegel turned the title of the show —  “Proud Parent of a Drug-Addicted, Tattooed, Pierced Sexual Deviant” — into bumper stickers and sold them at the show.

Since then, she’s made some big changes.

While she still considers herself “part of the queer community,” Siegel is today the matriarch of what appears to be a traditional heterosexual family. Her partner, Jules Fishelman, works as information-technology manager for the Vermont Energy Investment Corp. They have two children: Gertie, 9, and Ira, 6.

Fishelman and Siegel, who identifies as bisexual, filled out the paperwork to become married so that he could adopt the daughter Siegel had while she was single. And while she’s not ruling out a ceremony, she’s resisted marriage because of the “heterosexism” associated with the institution and due to “the whole ownership-of-women thing.”

More than any other city councilor, Siegel gives substance to the slogan, “The personal is political.” Hers is often a lone voice on gender issues. And while many councilors also speak about diversity concerns, none frame their comments the way Siegel does. She often emphasizes the need for white people to develop “antiracist” views.

That’s made her feel at times on the council like “an alien” whose comments on race and gender are greeted by silence. It leads her to suspect that some colleagues look upon her as “an absolute lunatic.”

But many councilors don’t view her that way at all. Instead, they voice respect for her stands while saluting her effectiveness.

Although he’s served longer on the council, Brennan says of Siegel, “I’m humbled by her leadership.”

Ward 6 independent Karen Paul notes that she plans to enroll in an antiracism training course that Siegel recommended. “She’s spoken passionately and convincingly about her belief in having the council get out ahead on that,” says Paul, a five-year council veteran who has helped Siegel draft a resolution declaring Burlington an “antiracist city.”

Siegel’s successes haven’t been limited to the realm of rhetoric. She persuaded a council majority to support her amendment back in February to remove the references to “antisocial behavior” from the no-trespass ordinance.

But Siegel concedes that she made a mistake by joining every other councilor in approving the ordinance itself. She and the rest of the Progs appear to be exhibiting “politician’s remorse” by objecting now to a measure they had backed, Blais observed at a council meeting in June.

In another positive outcome for a Siegel initiative, the council agreed early this year to change the vetting process for would-be members of the citizen commissions that monitor the work of city departments. Candidates now speak individually at Monday-night meetings about their qualifications rather than meeting collectively with councilors, who would then select a slate of commission appointments.

Asked what she regards as her most significant achievements as a council member, Siegel points to the establishment of a buffer zone for antiabortion protests at the Planned Parenthood clinic on St. Paul Street. She also cites passage of a resolution declaring Burlington’s opposition to transporting tar-sands oil through Vermont.

City voters will likely be asked next March to approve a variety of gun-safety measures being formulated by the council charter change committee that Siegel chairs. Blais, a member of the panel, says “she’s done a fine job” in developing consensus on that set of initiatives, which will probably include the proposal for a ban on assault rifles that Blais sponsored.

For all her radicalism and outsider cred, Siegel is becoming skilled at the politicking that can lead to concrete results on the council. “Rachel oozes inclusion,” says Ward 1 independent Sharon Bushor. “She’s very good at bringing people together on issues she’s passionate about.”

Siegel also knows when to shut up. She said hardly a word during the council’s recent consideration of UVM’s housing plan. “Others were saying what I might have said,” she explains. “There was no point in being repetitive.” That reasoning isn’t universally shared by her colleagues.

Another plus: Unlike some Progs, Siegel doesn’t come across as insufferably self-righteous. She smiles a lot at council meetings, and refrains from rolling her eyes when a member says something clearly incongruent with her belief system.

Her biggest disappointment so far on a council dominated by Dems?

Failing to win council support for an independent investigation of police actions at a protest on College Street in June 2012, Siegel responds. The cops fired projectiles at demonstrators rallying outside a meeting of New England governors and eastern Canadian premiers.

One lesson she’s learned on the outside and brought to the council: You have to get involved in what might seem to be “other people’s” causes if change is to be achieved. “Just as I want men to work for women’s rights,” she says, “it became obvious to me that I should work for civil rights.”

Involvement in the antiracism movement has in turn resulted in “making me committed to getting ethnic,” Siegel notes. She says she’s been reconnecting with her Jewish heritage, particularly its social-justice content. But, she adds, “the spiritual practice we have as a family is more around paganism.”

The evening hours spent on council business are too long for a mother of young children, she adds. “That part really isn’t working for me,” Siegel says. And she scoffs at the suggestion she might one day run for mayor. “That’s not something I can picture,” she says with a shake of her head.

Besides, Siegel still doesn’t see herself as a pol. She recalls a recent conversation with a 20-year-old constituent who said he was nervous about speaking with a politician. “Look at me,” Siegel says she told him by way of reassurance. “I’ve got hairy armpits.”