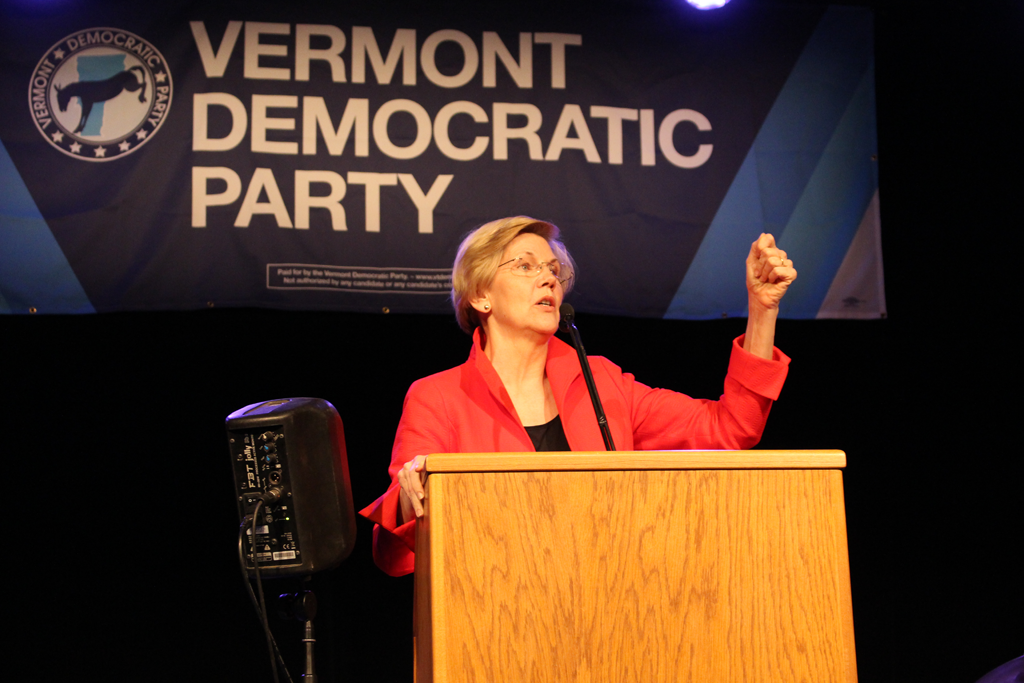 But last week, as Sanders and his ilk fought a provision in a massive spending bill that would loosen Wall Street regulations, there was a new star leading the charge: Sen. Elizabeth Warren (D-Mass.).

Instead of bending to the will of Citigroup lobbyists, she said in a fiery speech that quickly went viral, Congress "should have broken [the bank] into pieces."

Warren's remarks came as two liberal grassroots organizations — MoveOn.org and Burlington-based Democracy for America — joined a growing effort to coax the Massachusetts Democrat into the 2016 presidential race. And it came as 300 former staffers and volunteers for President Barack Obama's campaigns signed a letter urging her to run.

"There is no more clear advocate in the fight against income inequality than Elizabeth Warren," says DFA spokesman Neil Sroka, who added his name to the letter.

Sanders would surely disagree with that assessment. But as the Vermont independent waits for a "political revolution" to ignite his own likely presidential campaign, many liberals are patiently waiting for Warren. That makes her a bigger threat to the viability of a Sanders bid than presumed front-runner Hillary Clinton.

"For me, she's just the right woman for the time," says Kate Albright-Hanna, who served as Obama's video director during his 2008 campaign.

MoveOn will launch its effort on Wednesday in Iowa, just as Sanders wraps up his fourth trip this year to the Hawkeye State.

"I think a lot of people really want to break that big, bad glass ceiling, and I think that's why there's this hunger for Warren," he says.

(Though DFA was founded by former governor Howard Dean, the 2004 presidential candidate reiterated his support for Clinton last week in Politico Magazine, calling the former secretary of state "by far the most qualified" contender.)

To be sure, liberals aren't just excited about Warren because of her gender. The Oklahoma native spent 20 years writing about bankruptcy and personal finance at Harvard Law School and was a major force behind the creation of the Consumer Financial Protection Bureau in 2010.

And, let's face it: It's far more realistic to imagine her upsetting Clinton than a 73-year-old, grumpy white guy from Vermont who calls himself a Democratic Socialist.

Even Tad Devine, a prominent political consultant who plans to support Sanders if he runs, concedes that Warren could crowd out the Vermonter.

"I think if Elizabeth Warren gets into the race, she's going to take up a lot of space on that side of the Democratic Party that's looking for progressive leadership. Absolutely. No doubt about it. I've seen a lot of people very enthusiastic about her running, and I can understand why," Devine says. "But I've seen no indication from her that she's going to be a candidate for president."

If Sanders does end up running, Devine will likely play a major role in the campaign — and that's kind of a big deal.

Since he tracked delegates for Jimmy Carter's 1980 reelection bid, the veteran strategist and ad man has worked for dozens of presidential, senatorial and gubernatorial campaigns. He served as a senior adviser to Al Gore's and John Kerry's presidential campaigns in 2000 and 2004.

"Should he decide to do this, I told him I would support him and help him however he wanted me to," Devine says. "He has the capacity to run a serious campaign for president."

Given that more than 137,000 people have already contributed to Sanders' senate campaigns — and hundreds of thousands more subscribe to his email lists and social media accounts — Devine thinks "Bernie is in a very strong position" to do just that.

But he'll have to get started soon.

"My personal view is this race is going to get engaged really early next year," Devine says. "This isn't something you can put off. This isn't like 1991, when people were announcing for president in October or November the year before."

Sanders certainly hasn't been a stranger to early nominating states. In addition to his four trips to Iowa, he has traveled seven times this year to New Hampshire and one time each to South Carolina and Nevada. In his trip to the Hawkeye State this week, he held a town hall meeting in Ames and keynoted a Progress Iowa holiday party outside Des Moines.

"I see the early landscape of a nominating process ... as very favorable to a candidacy like his," Devine says, noting that the Iowa caucuses "tend to be dominated by very progressive elements."

In New Hampshire, Devine says, "I think a lot of people who've supported him for many years in Vermont will have the opportunity to get in their cars and travel to a neighboring state to support him."

Devine says his decision to back Sanders isn't "anything anti-Hillary at all," but one he made out of loyalty and friendship to a longtime client. He was the first out-of-state consultant to work for Sanders during the then-congressman's 1996 reelection race — and helped Sanders again in his 2006 run for the Senate. He says he has "spoken with him a few times and met with him two or three times" about a possible presidential campaign.

Devine says the closest historical precedent for a Sanders run would be Eugene McCarthy's 1968 campaign, which he believes the Minnesota senator might have won in the internet age.

"Should he decide to run, one of the tremendous impacts it could have on American politics is reenergizing young people," Devine predicts.

Now all eyes turn to the naming of committee chairs. In the Senate, such assignments are doled out by the three-member Committee on Committees, which includes Campbell, Lt. Gov. Phil Scott and the so-called "third member."

"I think last time around, I don't think there's a single person who didn't feel like they received a great committee assignment, so I think we've done well," said Ashe, who received a plum post as chairman of the Senate Finance Committee.

"I might argue with that one," whispered Sen. Ginny Lyons (D-Chittenden). The committee ousted Lyons two years ago after she spent a decade chairing the Senate Natural Resources and Energy Committee.

With Lyons' replacement, Sen. Bob Hartwell (D-Bennington), set to retire, that chairmanship is once again open. And according to several senators, nearly a quarter of the body is gunning for it.

Lyons says she would be "very happy" to return to her old job, arguing that she has proven herself "in terms of leadership and in terms of understanding the issues."

She's not the only former chair who's interested. Sen. Dick McCormack (D-Windsor), who led Natural Resources from 2001 through 2002, says returning to the committee "is something I very much want to do." To do that, though, he'd have to give up his chairmanship of the Senate Education Committee, which few seem interested in leading.

Other contenders include, on the right, Sen. John Rodgers (D-Essex-Orleans) and Sen. Diane Snelling (R-Chittenden); and on the left, Sen. David Zuckerman (P/D-Chittenden). Zuckerman might have a tough time getting the job, given his outspoken advocacy for Progressive/Democrat Dean Corren against Scott in the recent lieutenant governor's race. Both Campbell and Mazza championed Scott.

"My environmental record is probably stronger than what they would like to see as chair," Zuckerman says, "and they would be concerned I'd push too far on certain things."

A likely consensus candidate could be Sen. Chris Bray (D-Addison), who says "it would be an honor" to helm the committee.

In the House, many more committees appear likely to see new leadership, though Smith, who has sole discretion to name chairs, declined to comment.

More of a mystery in recent weeks is who will succeed Rep. Mike Fisher (D-Lincoln). The former chairman of the House Health Care Committee lost his race for reelection last month. Rep. Chris Pearson (P-Burlington) says he would "welcome the challenge," but says he's "realistic" about the chances of a Progressive being entrusted to shepherd Gov. Peter Shumlin's health care reforms through the House.

According to two knowledgeable sources who refused to be named, the post will actually go to Rep. Bill Lippert (D-Hinesburg). Though Lippert hasn't previously served on the committee, he has spent 20 years in the legislature and a decade chairing the House Judiciary Committee.

Replacing him on that panel will be its vice chairwoman, Rep. Maxine Grad (D-Moretown). Neither Lippert nor Grad returned calls seeking comment.

Smith, who has said his top priority in the coming legislative session will be to reform the state's education finance structure, appears likely to make sweeping changes to the House Education Committee. An ad hoc panel he appointed over the summer to study the issue recommended last Friday that the House Ways and Means Committee surrender its jurisdiction over education finance to the ed committee.

"The last two sessions, I asked to be chair of the education committee," Sharpe says. "I'm hopeful the speaker will do that, but he hasn't made up his mind yet."

Eight months after Vermont PBS' board of directors ousted longtime president and CEO John King, it has hired Holly Groschner to lead the station formerly known as Vermont Public Television. The Corinth resident currently serves as general counsel for the Vermont Telecommunications Authority.

Interim president and CEO Charlie Smith, who will stay on until Groschner takes the reins in February, says she will be "a great leader" for the station. He says its recent troubles, which included a Corporation for Public Broadcasting investigation and fine, are "100 percent in the past."

In other media news, business and data reporter Hilary Niles left VTDigger.org on Friday after 18 months at the online nonprofit. She's planning to work as a data consultant and freelance reporter.

"It was actually a really hard decision to leave Digger," she says. "My curiosity and my instincts were pulling me in a direction where I thought I could pursue more if I had more independence."

The original print version of this article was headlined "Left Behind"