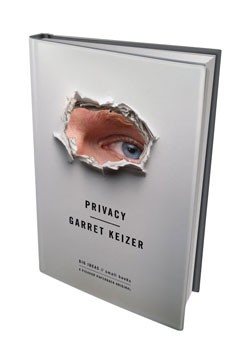 In 1998, anno Monica Lewinsky, the New Yorker carried an essay by the novelist Jonathan Franzen about privacy. In it, Franzen dismissed the “panic” over the perceived loss of privacy in America created by the new accessibility to digital data. Just look at the difference in house size compared with a hundred years ago, he wrote, and it’s clear Americans are “drowning in privacy.”

Instead, Franzen bemoaned the loss of public forums, which were increasingly being invaded by private life. Art museums still imposed a sense of decorum on their visitors, he judged, but city streets were losing out to private cellphone conversations held in public. Then, in the form of Kenneth Starr’s public report on President Clinton’s confessions, the private sullied even the most public of forums — Washington, D.C. “What I felt,” Franzen declared, after dutifully reading the report in the New York Times in an effort to remain an informed citizen, “was that my own privacy … was being violated.”

Much of Vermonter Garret Keizer’s new book, Privacy, echoes Franzen’s concerns, but in fiercer, more impassioned tones. Keizer, a contributing editor to Harper’s Magazine from his home in Sutton and the author of six other nonfiction books, is as disturbed as Franzen was by society’s apparent willingness to dissolve public-private boundaries — by what Keizer memorably calls the “new American type … for whom indignity is seldom so intolerable as inconvenience.”

Like Franzen, Keizer argues that digital technology is at best a “secondary privacy issue.” Privacy is about autonomy, not identity theft. It’s “the right to be let alone,” as Louis Brandeis and Samuel Warren defined it in the Harvard Law Review in 1890 — a definition that most writers on the subject cite and approve before acknowledging that legal definitions of privacy are generally a mess, not to mention inadequate.

Attempting his own definition, Keizer says privacy is violated when one is “used against one’s will,” however intangibly, and whether or not one is aware of the exploitation. This means that his neighbors’ privacy is violated “if I make a clandestine movie of [them] having sex, [even if] they never find out about it … and I reserve the film exclusively for my own enjoyment.”

But the differences between Franzen’s and Keizer’s views are instructive. The ornery novelist sees privacy solely as a refuge; when threatened, he escapes to an art museum. What he doesn’t mention is that the Museum of Modern Art in New York City currently costs $25 to enter, and that not everyone benefits from the increased square footage of American real estate. Keizer’s important contribution to the discussion is to remind everyone that privacy is a function of class privilege. “The right to privacy depends in large part on one’s opportunities for enjoying a private life,” he writes.

The observation is both obvious and infrequently acknowledged in popular discussions of privacy by writers such as Franzen (who, admittedly, has never evinced much concern for the truly poor). In his chapter “The Privacy of the Poor,” Keizer discusses some of the many ways in which privacy is denied the poor: They have smaller (or no) driveways, hedges, land, square footage; working multiple jobs leaves them less time to enjoy the privacy of home, if they have one; poor and minority citizens are more likely to experience routine police pat downs. In a survey of privacy violations of the disenfranchised, Keizer moves from Ota Benga, the African exhibited at the 1904 World’s Fair, to nursing-home residents on Medicare whose belongings are routinely subjected to staff searches.

Meanwhile, he fulminates, privacy “experts” distract citizens from recognizing the injustice of the class system by deeming privacy itself “undemocratic”; and academics (not the most moral crowd, in Keizer’s book) “hold forth on the false dichotomy of public and private, a favorite trope among those with private offices in which to write theoretical critiques of privacy.”

Keizer’s often incredulous tone and his wide-ranging points of reference — everything from Jeremy Bentham’s 1791 book Panopticon to John Tyner’s objection to the Transportation Security Administration’s interference with his “junk” to Virginia Woolf’s call for “a room of one’s own” — combine to make the experience of reading Privacy something like trying to keep up with a roller coaster. The brevity of the book (a Picador Big Ideas//Small Books publication) is deceiving: Keizer packs more in than seems possible, including a thoroughgoing rout of anthropologists’ claims that some primitive societies lack privacy altogether. But his tone never leaves room for doubt about the value of the ride: This is a subject on which Keizer is willing to bare his beliefs, privacy be damned.

Since the Lewinsky affair, concerns about privacy have changed in tone from fear to cynicism — at least judging by Keizer’s avowed adversaries. Besides the academics who live in a “post-privacy world,” there are those who have declared privacy bourgeois, elitist, culturally relative or prudish. And then there’s Christian Heller, the German blogger who has decided that the only way to confront the loss of privacy is to upload to the web every detail of his daily life, including a link to his bank account.

Meanwhile, everyone has her own story of violated privacy — to use Keizer’s default gender. Just hearing the title of his book caused a professor friend of mine to complain that her students consider having her cellphone number a right, not a privilege.

Food for thought at such moments: For Keizer, privacy is not just a refuge. He seeks more than to show readers How to Be Alone — the title Franzen’s essay eventually bore in book form. Rather, Keizer sees privacy as an opportunity to form small social units by, for example, providing “a zone of reflection and discussion in which gentler, less forward personalities can have some hope of making a contribution.”

In this way, privacy is “a petri dish in which resistance is able to grow.” And resistance, in Keizer’s view, is the key to democracy. Come together, privacy advocates, to preserve justice and liberty for all.

I would not be writing this book if I did not regard direct assaults on personal privacy to be a vital issue, but in some ways the indirect assaults are more formidable. In some ways, what we call privacy has become a shell game, one in which a show of superficial confidentiality hides grosser violations of the same. Even what I’m calling direct assaults work this way. One goes to the pharmacy, for example, where privacy policies are prominently displayed and a virtual ritual is made out of protecting the privacy of the customer. Don’t stand too close to the person handing in the prescription until it’s your turn at the counter! There you will be instructed to sign an electronic screen authorizing a “full release of medical information to any party connected with billing,” which in our global marketplace means any Delhi data clerk with minimal computer skills and even more minimal requirements for a livable wage. Back home you will sort through mail from medical researchers and philanthropic organizations with the uncanny ability to guess those medical conditions your doctor’s office has assured you are strictly confidential.

Similarly, we engage in discussions about the intricacies of protecting our personal information even as we lose our birthright to a full personal life. A man is fleeced of his pension, his right of collective bargaining, his chances of retirement, his likelihood of leaving a small nest egg to his kids — but look, look, here’s an article about the ever-looming dangers of identity theft! There’s a thief on your back porch, says the robber at your front door, stepping into your living room while you go to check.