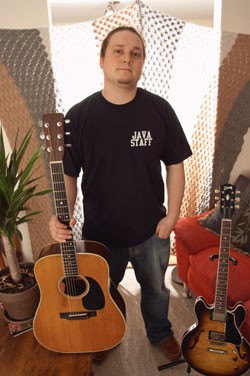 The past year has been a good one for Burlington singer-songwriter Zack duPont, and 2011 promises to be even better. Relaxing on a couch in his New North End condo, a mug of green tea in hand, duPont describes his upcoming tour, an intimate new album he recorded with bassist Pat Melvin and the “dream” project he’s been working on since last June with producer Jared Slomoff at Phish’s hideaway studio, the Barn. There, his bandmates got to play Trey Anastasio’s Wurlitzer electric piano and Page McConnell’s Slingerland drum kit, he notes. It’s safe to say, duPont is on a roll.

“It’s been crazy. I feel like this last year, some doors are opening up,” he says. “I just have goals to try to push it. I’m not content just chilling in Burlington and playing gigs ... I want to get out there.” DuPont pauses. He doesn’t want to sound like he’s dissing the Queen City. “It’s cool,” he continues. “I wouldn’t trade any of the experience I’ve gotten in Burlington for anything. It’s been a great place to develop.”

That development has happened over just a few years. DuPont arrived in Burlington in 2007, a fresh graduate of St. Lawrence University’s music program. Since then, he’s gigged around town “like crazy,” playing solo and in duos, trios and quartets, as well as with local fusion cosmonauts Japhy Ryder. DuPont says he’s played every room in town “except the Flynn.”

“I stopped by one of Zack’s gigs at Red Square and thought I’d just catch a few songs and head home,” says Slomoff during a recent conversation. “But I ended up staying the whole time and was riveted by the whole thing ... The thing that struck me about Zack was that he really had something to say.”

Slomoff approached duPont after the show and told him that if he ever wanted to make another record — he’d recorded his own debut, Paths, in 2009 — that Slomoff would like to be a “co-conspirator.”

The two started preproduction last June, recording demos, discussing the songs and taking notes. Then they tracked duPont’s band live at the Barn and recorded overdubs at several studios around Burlington. All that remain to be done now are the mixing and mastering.

Though he’s excited to finish the record, tentatively titled Somewhere in Between, duPont is about to embrace a longstanding reality of the Burlington music scene: If you want to make it — whatever that means — you have to leave town. Just ask Grace Potter and, well, those guys who own the Barn and the vintage gear: Phish.

DuPont and bassist Melvin are about to embark on an 11,000-mile cross-country tour that his friends have dubbed the Mustache Ride of 2011. After they play a kickoff gig at Parima in Burlington this Wednesday, March 23, they’re packing a Subaru full of gear and driving south. During the monthlong journey, they’ll play what duPont calls “intimate listening rooms” in 14 cities, including New York, Philadelphia, New Orleans, Austin, Los Angeles, San Francisco, Portland Ore, Seattle, Boulder and Chicago.

And what’s with the tour moniker?

“One of my buddies put all our tour into Google Maps and it looks like a big mustache,” duPont says with a laugh. I’ve been calling the southern leg the Taco Tour.”

DuPont has always wanted to see more of the U.S. While recovering from a recent surgery, he had little to do, so he sat in bed and booked gigs. He knew he couldn’t afford to take a band, so he only asked Melvin to join him. Once duPont had the dates booked, he knew they would need a CD to sell on tour, something that would showcase what they do live.

Luckily, duPont has been honing his home-recording skills since he was a teenager. So he set up one mic in his home studio — aka the dining room — and played 10 songs straight through. Then he recorded Melvin’s bass parts, and Duo was born.

The album is filled with deep, understated soul. DuPont’s lyrics brim with images from road trips and memories of family. His finger-style acoustic-guitar playing and chord changes shy away from big choruses and hooks in favor of what Melvin calls “unpredictable” progressions.

“The unpredictability is a real strong suit,” Melvin says by phone while driving back to Vermont from a gig in Maine. “It’s singer-songwriter [material], but not in your traditional singer-songwriter way. If you were to sit down and think about them, they’d be a bit more intellectual.”

Slomoff agrees. “One of the things that really struck me about him, and continues to strike me about him, is that Zack is able to take some heavy experiences and turn them into really beautiful pieces of music,” he says. “He’s doing it [as] part exorcism, part celebration.

“To make music like that, that has a real built-in directness and beautiful simplicity,” Slomoff continues, “it’s really very compelling and enjoyable for me. It’s the type of music that, at the end of the day, I want to come home and put on my stereo and listen to.”

Time will tell how the Mustache/Taco Tour turns out. Right now, one thing that Slomoff, Melvin, Sharbaugh, and duPont’s other friends and collaborators agree on is that the rough mixes of Somewhere in Between are exciting. From his Burlington apartment, duPont admits that he thinks this album will take him to another level — perhaps helping him hook up with a management company and score opening slots for bigger acts on national tours.

But his ambition to play bigger stages and cities hasn’t changed duPont’s approach to songwriting.

“If you’re trying to write stuff to seek approval from people ... I think it’s better if you disassociate all the stuff — the listener or the critic, the promoter, the manager — and just focus on creating the best music you can first,” he says. “Then maybe other things will fall [into place].”