Learning the Truth About Santa Claus 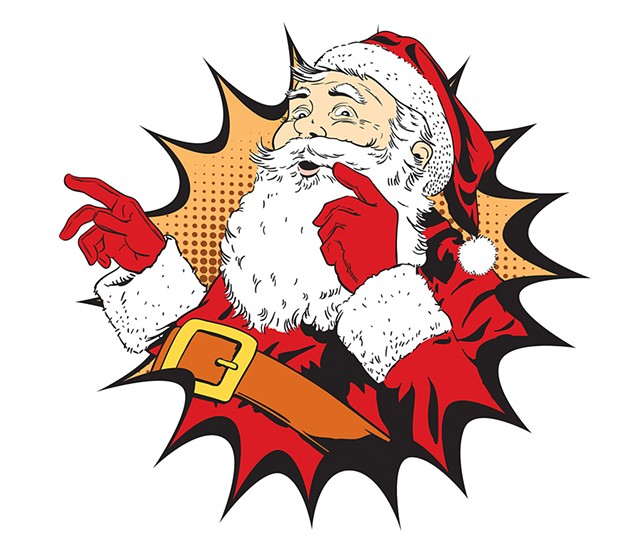 Warning: If you're a parent of kids who are old enough to read but young enough to still think Jolly Old St. Nicholas is coming to town, please hide this article. Preferably not in the same place where you're hiding their Christmas presents.

The scene: an editorial meeting. The characters: a bunch of staff writers who, occasionally, like to go off the rails. Their task: thinking up feature ideas for that time of year when life seems to slow down and speed up at once, aka the "holidays."

The talk somehow turned to the moment when each of us — those whose families observed Christmas, that is — discovered Santa Claus wasn't real. Most of us were in the neighborhood of 5 to 7 years old. One late bloomer was 10. A few were temporarily devastated, while others already had their doubts about the logistics of the whole deal. Flying through the air in a sleigh? Coming down a chimney? Chimneys all over the world in a single night? As if.

Thing is, whether or not he's real, the idea of Santa exists, and persists, as evidenced by generation after generation of coconspirators. As fairy tales go, it's not a bad one, after all, offering a fantasy of gifts freely given even as Christmas itself has been commercialized beyond belief.

One hundred and 20 years ago, newspaperman Francis Pharcellus Church wrote in the New York Sun, in response to an 8-year-old's inquiring letter, "Yes, Virginia, there is a Santa Claus. He exists as certainly as love and generosity and devotion exist ... Alas! how dreary would be the world if there were no Santa Claus. ... There would be no childlike faith then, no poetry, no romance to make tolerable this existence."

OK, then. Rather than calling these our recollections of when we became Santa Claus unbelievers, let's see them as the moments when we became coconspirators in the perpetuation of childlike faith in a good and generous world.

I had my suspicions by about age 5, but I think I was 6 when I saw presents wrapped and tagged "from Santa," and I recognized my mother's handwriting. I figured the adults would be bummed if I let on that I knew — plus, as an only child, I got lots of gifts and didn't want to jeopardize this bounty. So we all kept up the ruse for a few years.

The Easter Bunny basically murdered Santa Claus, is how I remember it. On a family ski trip over Easter, because we were staying at a friend's condo — and, most likely, because I was plenty old enough to be disabused of this whole silliness — my parents simply didn't do Easter baskets. I was all, "What? There won't be candy this year?!" And they were all, "Wait, you're serious? You still believe in the Easter Bunny and Santa?"*

From that point on, we spent Christmas Day flying out west to ski. [Chicago's] O'Hare airport is practically empty, and the traveling is so much easier.

*This is based on the memory of my 9-year-old self. My parents may rightfully dispute the accuracy of this story.

When I was 5, "Santa Claus Is Comin' to Town" seemed to play on a loop during the holidays. For some reason, I fixated on the lyrics "You better not cry / Better not pout." Every time I heard this warning, it sounded less innocuous. My mental image of Santa merged with my fear of aggressive clowns, and soon I saw him as a fascist enforcer of Christmas cheer who punished children for daring not to be happy. Thus motivated, I quickly figured out my mom and dad were stashing presents in the closet, and it was a huge relief to know I could cry and pout with impunity.

A couple of years after my parents split up — I was 6 or 7 — I remember having a hard time fitting my sloppy handwriting onto the tiny "To/From" tags as I wrapped the presents. On Christmas morning, I took note of how well Santa had fit his handwriting on the presents at my dad's house. Then I went to my mom's house and noticed that, even though the handwriting still fit, it was obviously not the same handwriting. Further investigation revealed that Santa's handwriting always matched the parent in the house.

In short, divorce killed Santa for me.

Normally, being the oldest of four kids was the best. I went to the big school first, got back rubs from adoring sisters, had a later bedtime. But just before my 10th Christmas, being the oldest went south. My best friend told me there was no Santa, and Mom confirmed the dastardly truth. I was crushed. Granted, I was pretty old still to believe in Santa, but the myth had been a necessary comfort in a wacky household. Learning the truth left me with two choices: Maintain the lie so my siblings could keep believing, or spill the beans and become the Grinch. I lied. That was not the best Christmas.

I have some vague recollections of my father and grandfather in Santa suits at various points in my childhood. But I don't specifically recall how or when the mystery of Santa unraveled for me. So long as packages addressed from the big man appeared under the tree every Christmas morning, I was content to play along.

I do, however, remember how I nearly blew it for two little boys, because it was last week.

My nephews, 5 and 8, have a detailed bedtime routine, lately made more difficult by the younger one's resistance to going to sleep. The drill includes reading books, brushing teeth and placing an anti-monster force field around the 5-year-old's bed. They also require to be sung a song.

Their dad, my brother, is a Christmas music fanatic. He passed that Clark Griswold-ian trait to the kids — especially by introducing them to holiday novelty songs such as "The 12 Pains of Christmas."

When I babysat my nephews last week, I was initially at a loss for what to sing. Then it hit me. I dialed up the lyrics to one of my childhood favorites, "Grandma Got Run Over by a Reindeer," on my phone.

All was going well until I reached the first chorus: "You can say there's no such thing as Santa / But as for me and Grandpa, we believe."

Oh, fuuuuuuudge, I thought. I was past the song's point of no return, so I had to hope that the line, which repeats several times, would fly over their heads like a sleigh. No such luck.

"That was funny!" the 8-year-old exclaimed. Then a puzzled look darkened his face. "But why would anyone say there's no such thing as Santa?"

I fumbled a bit before replying, "You know how Santa has naughty and nice lists? Well, people on the naughty list get upset that he doesn't come to their houses at Christmas. So they get jealous and say he's not real."

My nephew pondered this for a minute and said, "But he always comes to our house."

"Exactly," I said. "Because you guys are on the nice list."

Spotting an opening, I turned to the 5-year-old and asked, "And do you know the easiest way to stay on the nice list?"

"Bingo," I said, turning out the light.