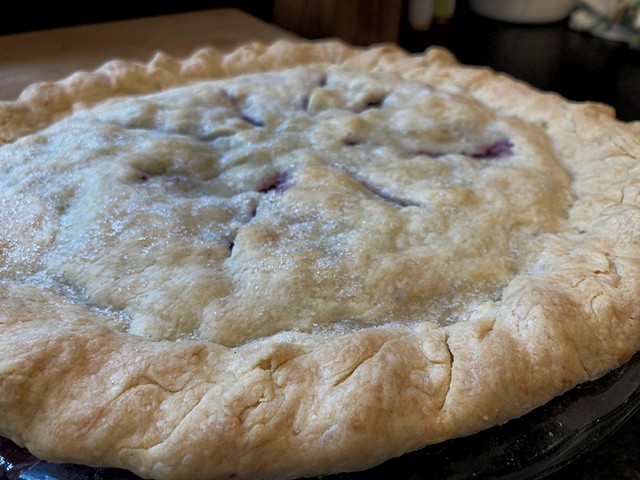 Gary Stuard maintains the tidiest kitchen I've ever seen, down to the nearly crumb-less interior of his oven and the orderly row of some three dozen cookbooks and food magazines standing sentinel on the countertop. So I was a little surprised when he forgot to add the cornstarch to our blueberry pie filling, which was already heaped into the pie pan. But Stuard, unfazed, sprinkled a few spoonfuls of cornstarch onto the filling and stirred it in.

"Sometimes little things happen," he said, "or you forget, and it's not the end of the world."

This exemplifies the pie-making philosophy I learned after spending a few hours in Stuard's Winooski kitchen last week. Make a plan, follow a recipe but roll with the punches.

Such wisdom, served with a hefty helping of practical how-tos, is what the 63-year-old Texas transplant hopes to offer in the baking parties he's started advertising on Front Porch Forum. For $40 per person, groups can spend a few hours with Stuard learning the art of the tart — or pie, torte or rustic cake — with all ingredients, tools and recipes provided.

"The art of making pie has somewhat faded over the years and many folks feel intimidated by the idea of making anything from scratch," Stuard wrote in his posting. "Happily, with simple guidance and good ingredients, pie making is rather easy, even fun."

He said he's received some interest, and though he hasn't hosted a party yet, he hopes to make them a side gig on top of his job as a cashier at City Market, Onion River Co-op. He's even expanding his repertoire by researching and practicing gluten-free baking. 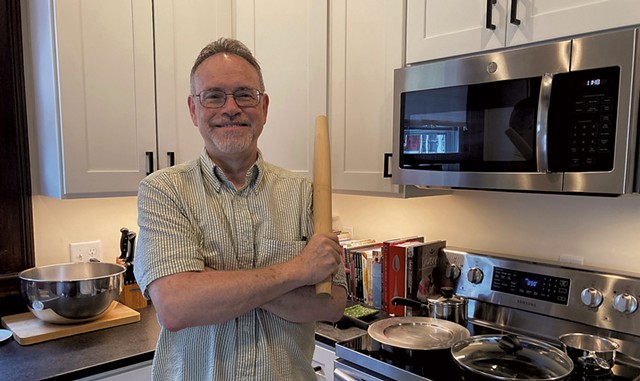 Stuard grew up eating pies made by his mother and grandmother, who once ran a roadside café in Breckenridge, Texas. Often lonely as a child, he found comfort in his grandmother's baking. "Eating her pies was like eating love," he said. "Her meringue pies were a work of art."

But Stuard was an observer, not an active participant, of these women's baking. He didn't learn to cook and bake until he was living on his own. For a Christmas party in college, he made a dark-rum-ginger-pumpkin pie, a recipe he still makes to this day. He began baking more regularly for friends. "After a while, people knew I was the pie guy," he said.

Later, Stuard became an activist. He's a member of the Democratic Socialists of America, he ran on the Green Party ticket for U.S. Rep. Pete Sessions' (R-Texas) congressional seat in 2016, and he's been arrested while protesting the Keystone XL pipeline. He found that gathering around food helped build sustainable movements.

"One of the most important things is creating community," Stuard said of activism work. "[Cooking is] a way of saying, 'I love you. You mean a lot to me.'"

Burned out on activism and his career as a social worker, Stuard and his husband, Fred Patchen, left Texas for Vermont nearly two years ago. They think of themselves as political and climate refugees.

When I contacted Stuard to set up a private baking session, he told me about the blueberry-lavender pie he had created after seeing a similarly flavored salad dressing in the grocery store. I was intrigued. That was the recipe I wanted to try. 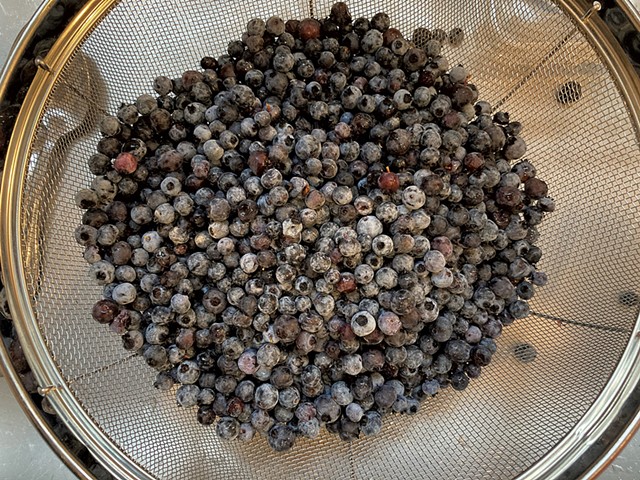 Stuard has tested many piecrust recipes, and for our pie he turned to the 1998 cookbook Great Pies & Tarts by Carole Walter. Crust recipes are generally pretty simple — flour, water and fat — but Walter's uses a combination of unsalted butter and non-hydrogenated vegetable shortening. The butter is for flavor, Stuard explained, while the shortening helps build a flaky texture. Shortening has a higher melting point, a desirable trait because a key to obtaining a flaky crust is keeping the fat cold.

Some recipes call for frozen butter, but Stuard keeps his in the fridge and grates it into the flour with a cheese grater. He does, however, keep his flour and sugar in the freezer to help keep the fat cold as the crust is mixed. On a hot day in Texas, he would even put his mixing bowl in the freezer before making piecrust.

When the grated butter and shortening were fully mixed into the flour, Stuard slowly added water, mixing with the other hand until the dough held together and was smooth but not sticky. He separated it into two balls, put them in an airtight bag and set them in the fridge.

Then we went to work on the filling: four boxes of small, jewellike Maine blueberries; sugar; and the secret ingredient — dried lavender. Stuard added the lavender gradually, stopping periodically so we could taste a bit and smack our lips thoughtfully. We aimed for enough lavender to lend a hint of flavor that would linger, but not so much that the filling tasted like a candle.

When the filling was prepped, Stuard sprinkled the counter with flour and rolled out the pie dough so quickly and efficiently that I barely realized what was happening until it was done. When he placed the dough into the ceramic pie pan, the crust ripped in a few places, but Stuard just patched it with extra dough.

I mounded in plenty of filling — Stuard said he liked his pies to "look pregnant" — and then stirred in the forgotten cornstarch. Stuard dotted the top with a few pats of butter for flavor, and we gently stretched the top crust over the pile of berries.

Stuard cut a sunray pattern of slits into the top crust — fruit pies need to vent steam as they bake — and sprinkled a generous layer of sugar over it. A brushing of milk also helps the crust brown, he said, but we didn't have any. Into the 350-degree oven went the pie, for just over an hour. 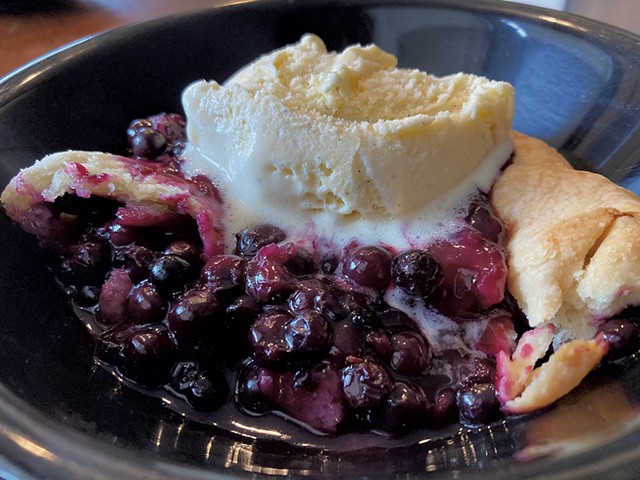 During a typical baking party, guests might provide wine and hors d'oeuvres while their creation baked, but it was the middle of the afternoon, so the two of us settled for sips of Earl Grey tea.

When the apartment had filled with the smell of browning butter and the crust had started to take on a golden color, Stuard pulled the pie out of the oven. Recipes typically advise waiting for a pie to cool completely before slicing it, so the filling can fully set. But we were overeager and on a schedule, so we managed to wait only 10 minutes. Stuard cut generous slices and topped each with a scoop of vanilla ice cream, and we dug in.

The surface of the crust crumbled under my spoon and crunched slightly in my mouth, and the interior offered a satisfying chew. The filling was perfectly sweet, and the lavender gave it an elevated, herbal aroma. It was probably the most decadent thing I've ever eaten at 2 p.m. on a Tuesday, and when Stuard asked me how it tasted, I could only nod enthusiastically, mouth full.

Spending an afternoon making a pie with Stuard and talking about building community was exactly the balm I needed during these stressful and uncertain times. While the pie was baking, we luxuriated in its warm, sweet aroma.

Correction, August 27, 2021: An earlier version of this story misstated how many times Gary Stuard has been arrested while protesting. He was arrested once. A previous version also misstated who provides wine and hors d'oeuvres during a baking party; guests bring their own.

The original print version of this article was headlined "Blueberry Bliss"