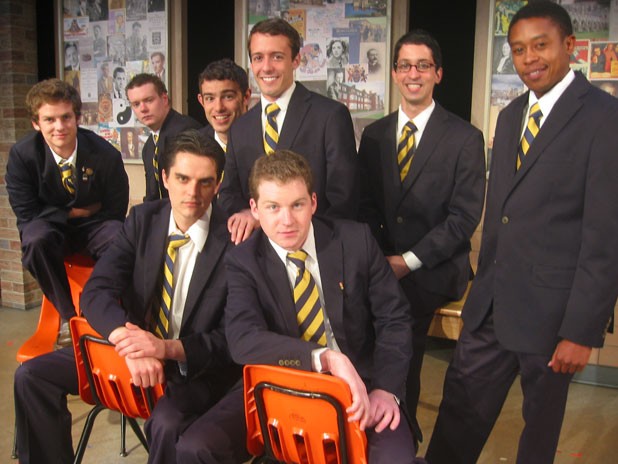 British playwright Alan Bennett has a gift for creating intriguing characters. Most widely known on this side of the pond is his fascinating (and sympathetic) portrait of England’s George III, the monarch American history so roundly demonizes, in a play filmed in 1994 as The Madness of King George. In Bennett’s Talking Heads (1988), monologues from unassuming Englishmen and women unfold with startling poignancy. Simple characters yield complex, moving studies of the human condition.

Bennett’s latest, The History Boys, has garnered gobs of critical acclaim and awards on both sides of the Atlantic, including the 2006 Tony for Best Play. Northern Stage in White River Junction is mounting the regional premiere of the show about eight English schoolboys from modest backgrounds who are applying to Cambridge and Oxford. The dynamic cast performs with zest under Brooke Ciardelli’s energetic directorial hand.

But the long play sometimes feels a bit, well, stagy — the fault of the dozen-character script, not the snappy Northern Stage production. For Bennett, cleverly playing with Big Ideas seems to trump breathing life into his dramatis personae.

The playwright sketches the characters with witty quips and memorable quirks. And they serve effectively as vehicles for the combustible subject matter: the relationship between teachers and students, perils of adolescent sexuality, differing philosophies of education and history. Where his other plays work so powerfully, however, this one falls short. His portraits don’t etch themselves deeply on the viewer’s heart.

Cutlers’ Grammar School in Sheffield has an unusually clever group of top college prospects. The headmaster of the modest state institution is determined to increase his school’s prestige by getting some of the boys into “Oxbridge” — Oxford and Cambridge, Britain’s coveted duo of universities whose exalted educational and social position has no real parallel in American society. (Think Yale and Harvard on steroids.) By the 1980s, when the play is set, admission was starting to open up to students without upper-class or private-school pedigrees. But the Sheffield boys still face a daunting challenge.

Eight boys are prepping for the scholarship examinations in history. (Students apply for specific courses of study at individual colleges within the universities.) All are eager learners, but their three history teachers believe in radically different approaches. Mrs. Lintott, who taught them the previous year, sticks to facts. Hector, their current teacher, is a devotee of literature, poetry, film and the boys themselves, but he abhors teaching to the test. Because the headmaster fears another year of disappointing results, he assigns a young newcomer, Mr. Irwin, to “pull us up the table.”

Irwin’s methods infuriate Hector. The new teacher encourages the students to argue contrarian positions, not because they believe them but to score points. He wants them to grab the attention of sleepy dons, bored from reading hundreds of well-reasoned essays that say the same thing.

“Truth is no more an issue in an examination than thirst at a wine tasting or fashion at a striptease,” Irwin posits. He urges the students to dissent from mainstream opinions, even on extremes of evil such as Stalin and the Holocaust. “History nowadays is not a matter of conviction. It’s a performance. It’s entertainment,” he asserts.

The kids take a while to become adept at Irwin’s technique, in part because Hector’s pure passion for culture and his fun-filled classroom style have already seduced them. Unfortunately, Hector takes seduction a step too far outside the classroom, “fiddling” after school with the boys. While riding his motorbike at 50 mph. When the headmaster’s wife spots him, the jig is up, and the school year ends with bittersweet results for all.

Drew Taylor shines in the pivotal role of Hector, ably embodying the teacher’s many contradictions. His forceful stage presence reflects Hector’s classroom magnetism: fierce, fast moving, galvanized by the subjects he loves. After Hector is caught, Taylor’s weary, slump-shouldered body language conveys more regret over Hector’s sexual transgressions than the script does. (The bizarre excuse? The sexual abuse is an “inoculation” to prevent the boys from loving literature too much.)

The actors playing students create a genuine feeling of classroom camaraderie. Among the high-spirited ensemble, Matt Jared gives the most charismatic performance, as the suave, sexually adventurous Dakin. Jared projects Dakin’s intensity and self-assurance by keeping his chin held high and making deep eye contact as he moves like a predator into the personal space of other characters.

One of the characters in love with Dakin is his young classmate Posner, played delightfully by Trey Mitchell. Although Mitchell’s repertoire of fussy gestures and clipped speech patterns occasionally veers toward gay stereotypes, he movingly captures the pain of Posner’s unrequited crush on Dakin and his deep love for Hector’s teaching. A nice bonus is his lovely, light tenor voice on a verse of “Bewitched, Bothered and Bewildered,” sung longingly to Dakin.

Elizabeth West excels as the practical, earthy Mrs. Lintott. She stands firmly rooted on the stage to deliver the sometimes-frustrated teacher’s words of wisdom, exasperated exclamations and wry asides. The playwright comes off a bit misogynistic, however, by having the only woman character gratuitously spout the worst Anglo-Saxon curses for the female anatomy. Nonetheless, West brings dignity to the role, especially in the scene with her wonderful rant about women’s subordinate position in history.

As Irwin, Brad Frazier’s performance is subdued. His character relies on persuasion rather than personality, and uses his intelligence to cover insecurity. Frazier portrays these layers well. But an added degree of charm or ebullience would have increased the believability of the kids’ eventual strenuous efforts to gain Irwin’s approval.

The ensemble’s chemistry gels because Ciardelli directs with confidence. Scenes change crisply, with the cast members doubling as stagehands. The students briskly carry pale wood, two-person tables (which serve as desks) and orange plastic chairs on and off the set. The rest of Ken Goldstein’s spare design consists of three brick pillars, in industrial gray and pink. Flats slide out from the pillars with the classroom door and back walls, postered over with cultural icons from Martin Luther to Marilyn Monroe. Peppy ’80s pop and a few classical music excerpts underscore the well-choreographed scene changes.

Yet the number of scenes makes the sheer volume of changes somewhat distracting — again, the playwright’s problem, not that of the production. It creates a restless mood that diminishes the audience’s ability to connect emotionally. Longer scenes, such as Posner’s poetry recitation for Hector, carry the greatest impact.

More disturbing still, Bennett never places much weight on how the teacher crosses a central moral boundary of his profession by having sexual contact with his students. In a 2004 interview with the London Daily Telegraph, Bennett admits his indifference. “I’m afraid I don’t take that very seriously if they’re 17 or 18. I think they are actually much wiser than Hector. Hector is the child, not them.”

Bennett’s naiveté undermines the play. Sex between a teacher and student is not about age, or even emotional maturity. It’s about power and violation of trust. Ask anyone who has been on either side of this equation in real life. Contrarian writing about a difficult subject is one thing. Glibness about a thorny issue, central to the script, is quite another. It diminishes the drama and leaves a bad taste behind for the audience.