Learning Curves: Local students fess up about their summer internships 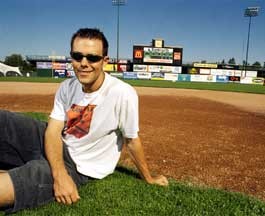 Chris Kirkpatrick got a whipped-cream pie in the face. Sayler Bardsley had to dress in a horse costume. Paul Zannelli reveled in being board —that’s snowboard — for three months. All three were among legions of local college students who opted for internships rather than vacations this summer.

Short-term summer waitressing, dishwashing and telemarketing gigs may be a thing of the past. “Interns” choose professions that match their majors, turning even fleeting gigs into significant investigations of the labor market that awaits them after graduation.

“There is no doubt that mixing theory with practice has been heavily endorsed by the American higher-education community for many years. We encourage students to learn by doing,” says Pat Boera, associate director of career planning at Cham-plain College.

“In this day and age, everybody and their brother has a degree,” suggests Brad Minor, who oversees the internship program at Burton Snowboards in Burlington. “To get that first job out of college, you have to have some experience that’s valuable.”

Burton is apparently considered an ideal workplace by the under-30 generation partial to the products manufactured there. “We had about 1000 applicants from all over the world,” explains Minor, a project specialist in the human resources department. “We narrowed that down to 15 summer interns.”

Zannelli, a 22-year-old junior in the Johnson State College external degree program, was one of the lucky few. “Burton’s such a cool company,” he says. “And I’m a snowboarding freak.”

It was Zannelli’s second time around. He spent the recent spring semester at Burton on a full-time paid internship worth three credits because he was majoring in business. After switching to an environmental-studies major, Zannelli put in 12 unpaid hours a week at the company from June through early August — for no credit.

“Our interns work on projects that might otherwise fall through the cracks,” says Minor. Among Zannelli’s many tasks during his initial semester-long internship at the company was putting together a “yearbook Web site” to give the almost 400 Vermont employees a way to learn about each other.

“I planned a lot of it and I gathered the photos from everyone,” Zannelli says, adding that this effort enhanced his organizational talents and people skills. “It’s more or less for the experience,” he acknowledges. “I’d like to do it again in my senior year.”

Williston native Chris Kirkpatrick is equally enthusiastic about his boys-of-summer months with the Vermont Expos, even though it meant working about 65 hours a week all summer. At 22, the Champlain College sophomore can look back on the late June pie-throwing episode and laugh. Although unexpected, it took place during one of the many stunts he and seven other baseball interns —out of 256 who applied —performed between innings to entertain the fans.

“The pie came as a surprise at the end of a skit that was scripted,” recalls Kirk-patrick, whose tour of duty ends in early September. “Our team was playing the Brooklyn Cyclones. I had to dress like one of them and sit in their dugout. Our mascot, Champ, did a hex to jinx them. I hopped out with a bat that had been almost sawed in half to threaten him… I ran and he lured me back to the middle of the field. That’s when he threw the pie, followed by pouring a five-gallon bucket of water over my head.”

Seems like Kirkpatrick, who already has an associate’s degree in sports management and is now working toward a BA in business, really earned those three academic credits. “I could still smell the whipped cream for days,” he says. “This internship has been a blast. There’s nothing in the world I’d rather be doing.”

Ditto for University of Vermont junior Sayler Bardsley, 20, who landed a dream job with the New York City publicity department of the movie studio DreamWorks. Her equine moment, a promotional gimmick, came at a May 28 Manhattan premiere of the animated film Spirit: Stallion of the Cimarron, penned by Stowe-area screenwriter John Fusco.

“It was ridiculous,” Bardsley notes sardonically. “In this horse costume, I was giving out souvenir key chains and hats to famous people’s little kids. And the press was there, taking pictures of me. I’m going to be in People magazine like that?”

Her internship, a one-credit arrangement that ended at the beginning of August, included another movie premiere she had to help publicize: The Road to Perdition on July 9. “It was mayhem,” Bardsley recounts. “Leading up to the event, I was on the phone all day, every day. I’d have hour-long conversations with Stone Phillips” of NBC’s “Dateline.”

When the big night arrived, Bardsley was costume-free but dressed to the nines, all day until 2 a.m. “I’ve never been so star-struck,” she admits. “My assignment was to hang out with Jude Law and his two agents at the Regency Hotel. We became great friends. Then, at the dinner table, I was the ‘minder’ of Tom Hanks, making sure people didn’t bother him. It was his birthday. I think he had a few too many drinks.”

It’s hard to see how DreamWorks jibes with Bardsley’s political science major and art history minor. But she’s a young woman who appears to understand life’s vicissitudes. She had a 2001 internship helping low-income immigrants in Rhode Island. Moreover, Bardsley was able to keep the “pushy, vain film industry” in perspective thanks to the volunteer work she once did with homeless people.

Indeed, all is not glamorous in the working world, as Travis Hill discovered first-hand at the Baird Center for Children and Families. As a residential treatment counselor at the Queen City-based nonprofit, the 22-year-old UVM senior and seven other staff members supervise a “home” with six troubled youngsters — aged 10 to 13 — who have been abused, neglected and even tortured.

“There’s a lot of emotional baggage,” Hill explains. “These kids have been through some of the worst things you can imagine. We try to help them learn social skills so they can function in society.”

Hill has a good role model in Hanna Black, his team leader. She did two UVM internships herself at Baird in the late 1990s. “We get a lot of interns that we then hire,” she says. “During my first year here, most of the staff had started out as interns, in fact.”

A psychology major, Hill was able to parlay his part-time regular employment at Baird into a full-time summer position for nine academic credits. Unlike Zannelli, Kirkpatrick and Bardsley, his job comes with a salary.

“We tell prospective employers that the work would be a lot more attractive to most interns if they’re paid,” says Courtney Lamon-tagne, coordinator of UVM’s “community partnerships,” as the internship program is called. “Tuition covers 18 credits for fall and spring internships, but students who work in the summer have to pay extra for those credits.” In some instances, interns are paid a stipend at the end of their assignment.

The vast majority do it for educational benefits and to enhance their resumes. Although that may involve performing menial tasks such as filing and photocopying, even fetching the coffee, employers generally realize the intern is not their slave. “An internship should be mutually beneficial,” asserts Gail Albert, coordinator of academic services at Community College of Vermont in Burlington. “It ought to be meaningful to the student and help them meet their goals.’”

After defining what they hope to accomplish in an internship before they begin, most students are required to keep journals and/or write papers. Some attend a class, such as the weekly three-hour session taught by Lamontagne at UVM. “A three-credit intern writes five three- to five-page papers, plus an introduction and a conclusion,” she explains. “That is multiplied when more credits are involved.”

Travis Hill, who works 40 to 50 hours a week at the Baird Center, must compose 11 three-to-seven-page essays and read five to 10 pages on a related subject during his internship. “My summer is kind of packed,” he says. “I’m also taking a statistics course.”

At CCV, summer internships are considered independent studies. “Those students must put in 110 hours of time at their jobs during the course of the summer, and they negotiate their reading and writing assignments,” says Albert.

For his sojourn with the Vermont Expos, Chris Kirkpatrick writes four pages a week in a journal and will share those observations while participating in an internship class back at Champlain College this fall. His pie-in-the-face day should make for a compelling chapter.

Kirkpatrick is fully aware that his foot-in-the-door experience could land him a job someday. “A former intern for the Expos is now director of media relations for the Toronto Raptors,” he points out.

UVM student Sayler Bardsley already knows what grade she received for her DreamWorks job: A-minus. Better yet, they want her back next summer. “It was so much fun, but I really got a lot out of it. My computer skills improved and now I can work a fax machine in my sleep, probably,” she says. “The best part was learning how to deal with people, catering to different personalities. When you have to call up Barbara Walters, you’ve really got to pull yourself together.”

Speaking of Back Issue, university Of Vermont

Education back issue university of vermont