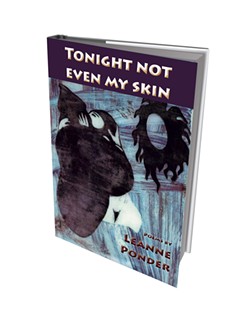 Vermont storyteller Leanne Ponder described her newly published book of poems, Tonight Not Even My Skin, like this: "It was like I found poems by somebody else [and thought], These are pretty good." Ponder rediscovered her own writing in the form of typewritten pages, some 25 years old, that lay forgotten in a cardboard box in a back room of her East Montpelier home.

Seven Days spoke with Ponder and her husband and creative partner, Tim Jennings, at Burlington's Muddy Waters, seated in the café's curved booth — a piece of furniture that, incidentally, once belonged to Ponder at her home in New Mexico, and later in Vermont.

In an online description of the poetry collection, Jennings writes, "Leanne was a recovering poet when we met. She'd stopped writing poems for multiple and complicated reasons." Not surprisingly, one of those was money, or lack thereof. Before abandoning poetry, however, Ponder had found relative success with her work, publishing in Esquire, Story, the Transatlantic Review, Cricket and others.

Ponder wrote the poems in Tonight Not Even My Skin between the ages of 20 and 40, she estimated. The subject matter is wide-ranging, with a mixture of autobiographical and invented or observed vignettes. In the former category, topics include family tensions, encounters with lovers, the negotiation of a divorce and the desire to be a mother. "[Having a child] never happened," she said, "but it brought a lot of poetry."

The poem "Shadows, Ashes, Desert Prayers" illustrates the vitriolic aspects of Ponder's relationship with her own mother, with lines such as "I was a child you would not have chosen: / silent, headstrong, and never quite pretty."

As Jennings put it, "It'll kick your ass when you hear her read it."

Ponder began writing poetry in elementary school, after she gave a teacher a Thanksgiving poem, written by her mother, as her own. "I don't know what the psychology behind that is," she said.

A strong element in many of Ponder's poems is an empathic connection with the underdog, particularly in relation to children. "Rumplestiltskin," originally published in Esquire in 1976, presents the folk tale's antagonist as a victim of the pain and humiliation of being an outsider because of his physical deformity. At the same time, the poem evokes Ponder's desire to have a child. "I was trying to give [Rumplestiltskin] a better deal," she said.

"Sincerity Paper: A Mother's Comment" offers a seething commentary based on the Chisso Corporation's "sincerity paper." That document expressed regret — but not legal responsibility — for contaminating the water supply of Minamata, Japan, with industrial waste for more than 30 years, inadvertently poisoning and killing residents.

Transitions and endings of romantic and close relationships are another common thread in Ponder's poems. In "Parting," a paramour "started up his car, and drove away / smile, love and all, leaving not a woman / but an audience." Asked about this dark poem, Ponder merely laughed and reflected on the (distant) past lover's goofy grin. "The person that wrote these poems was more ... lonesome, wanting excitement," she suggested.

For Ponder, one of the most exciting parts of giving new life to old poetry has been the opportunity to read her work aloud to an audience. So far, she's given two readings, one at Muddy Waters in November, presented with poet David Huddle and pianist Lar Duggan; and another earlier this month at Montpelier's Kellogg-Hubbard Library, with poet Geof Hewitt and pianist Michael Arnowitt.

"I felt so happy," she said. "There were these wonderful people who actually liked my poems."

Ponder and Jennings have received acclaim for their folk-tale storytelling performances and recordings. But when reading her poems, Ponder noted, she enjoys not having to worry about remembering her lines. She attributes this sense of relief in part to a stutter she had as a child.

The couple intimated that they're interested in recording Ponder's poetry readings, as well as in publishing a second volume of her work.

"I feel comforted both by what I've written and the people who've come to listen," said Ponder. "It's a good thing for me to do."

Books Leanne Ponder Tonight Not Even My Skin poetry