Leahy’s Retirement Announcement Sets Off a Scramble to Succeed Him

By Kevin McCallum and Derek Brouwer

Sen. Patrick Leahy's (D-Vt.) announcement on Monday that he will not seek reelection next year ended months of speculation and created a rare opening for a Vermont congressional seat.

At an event at the Vermont Statehouse, Leahy, 81, said he plans to retire from the U.S. Senate, where he is the longest-serving member and the fifth-longest-serving senator in the chamber's history. The former Chittenden County state's attorney was first elected in 1974 and is currently in his eighth six-year term.

"It is time to pass the torch to the next Vermonter who will carry on this work for our great state," he said. "It's time to come home."

Leahy spoke to staff, friends and media packed into Room 11 — where he launched his first Senate campaign. He delivered prepared remarks for nearly 20 minutes, recounting what he considered his proudest achievements in Congress. His wife, Marcelle, who began chemotherapy treatments in May for chronic lymphocytic leukemia, was by his side.

"While I'll continue to serve Vermont, Marcelle and I have reached the conclusion that it is time to put down the gavel," Leahy intoned in a gravelly voice, adding that representing Vermont has been his "greatest honor."

The dean of the U.S. Senate did not elaborate on the reason for his retirement and did not take questions. He later told Vermont Public Radio that he and Marcelle made the decision over the summer, but they waited to announce it until he had wrapped up several legislative priorities important to Vermont.

Leahy was referring, at least partly, to the recently passed $1.2 trillion infrastructure bill. After Monday's speech, he hurried back to Washington, D.C., to be at the White House as President Joe Biden signed the measure into law.

Leahy also told VPR host Bob Kinzel that spending more time with Marcelle, who has been a near-constant companion, was key to his decision.

"I never could have done this without Marcelle, and she deserves to have my undivided attention," he said.

Leahy chairs the powerful Senate Appropriations Committee and serves as the Senate president pro tempore, giving him outsize influence despite hailing from one of the country's smallest states. As pro tem, he's third in line to succeed the president, behind Vice President Kamala Harris and House Speaker Nancy Pelosi (D-Calif.) He presided over former president Donald Trump's impeachment trial earlier this year.

The Batman fan also had five cameos in the DC Comics character's films.

Within the Beltway and beyond, speculation about Leahy's health has in recent years fueled chatter about whether he might retire. His speech and movement have slowed, but few have publicly questioned his mental fitness.

"It is time to pass the torch to the next Vermonter who will carry on this work for our great state." Sen. Patrick Leahy tweet this

Leahy was hospitalized briefly in late January after reporting a muscle spasm. He was checked out at George Washington University Hospital and sent home to rest; he returned to work the next day.

On Monday, state Rep. Tanya Vyhovsky (P/D-Essex), who was previously endorsed by Sen. Bernie Sanders (I-Vt.) in her Vermont House race, said she is exploring a run for Senate "on a people powered, democratic socialist platform."

Leahy's retirement could also open the door for a Republican challenger, though Gov. Phil Scott, the VTGOP's strongest statewide vote-getter in recent years, is not interested in running for Congress next year, a spokesperson said.

Sen. Phil Baruth (D/P-Chittenden) a University of Vermont professor who authored Senator Leahy: A Life in Scenes, said Leahy may very well be "the most influential Vermonter ever sent to Washington." Only two others contend for the title: Justin Morrill, a representative and senator who served in the latter half of the 19th century, and Leahy's predecessor in the Senate, George Aiken, who served 34 years. Both men were Republicans.

"To have it be undeniable that you're in the top three ... is astounding," Baruth said.

Leahy, as Baruth makes clear in his biography, repeatedly found himself "by chance or by choice at the pivot points in history."

After September 11, 2001, for example, Leahy, then chair of the Judiciary Committee, pushed back against administration plans to eliminate due process rights for anyone deemed a terrorism suspect. Most remarkable is that he did so even after he was targeted in an anthrax attack.

"He was the only person saying 'Slow down' on the Patriot Act because the administration's draft is going to gut civil liberties in America," Baruth said.

Whatever the appeal or political prowess of Leahy's replacement, they will likely be unable initially to match his clout and skill for getting Vermont its fair share — and more than its fair share, some have argued — of federal dollars.

"My approach on Appropriations was simple: Help all states in alphabetical order — starting with the letter V, Vermont," Leahy quipped during his Statehouse remarks. 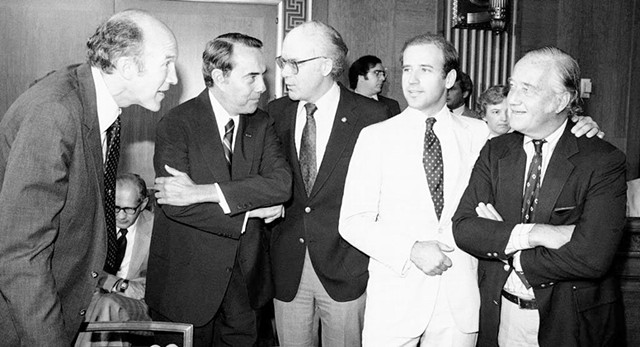 Leahy cited the formula for helping the state receive sufficient funds to recover after Tropical Storm Irene, to combat the opioid epidemic and to bring home $2.5 billion in COVID-19 relief.

Other accomplishments he cited on Monday included expanding the Green Mountain National Forest by more than 100,000 acres, securing "tens of millions of dollars" to clean up Lake Champlain and Lake Memphremagog, and helping establish and protect the integrity of the national organic standards and labeling program.

He did not mention his support for more controversial programs.

Leahy strongly backed the decision to base the F-35 fighter jet at the Vermont Air National Guard base in South Burlington. The decision steered millions in federal investment toward Guard personnel and base infrastructure, but it angered critics who blame him for the dramatic increase in jet noise.

His comments at the Statehouse drew warm applause from legislators and staffers. He'd barely left the podium when elected officials began showering him with accolades and gratitude.

"It is a historic and bittersweet day," Welch said in a written statement. "It is hard to imagine the United States Senate without Patrick Leahy. No one has served Vermont so faithfully, so constantly, so honestly, and so fiercely as Patrick."

Balint said it was "almost impossible to find words to do justice" to the service that Leahy and his family gave the state and country over the years. "His exceptional commitment to our state's values of progress, equality, and dignity for all have improved the lives of generations of Vermonters," she said.

Gray called him an "inspiration."

"From human rights and civil liberties to international engagement and humanitarian relief, Senator Leahy has served as Vermont and our nation's north star," she wrote in a statement.

Ram, who was overseas in Berlin participating in a policy exchange program, also released a statement, calling Leahy a "titan" who "championed values that Vermonters hold dear."

He worked to ensure "that Vermont can access the resources needed to support our communities and be an experiment station for innovation on health care, rural development, clean water, public lands, and so much more," her statement said.

"Stepping aside to let the next generation step up is yet another act of visionary leadership. We will not let you down," Ram added.

Leahy's longtime colleague Sanders, 80, is up for reelection in 2024 and is also a source of retirement speculation after 30 years in Congress and two failed presidential runs. In a statement, Sanders called Leahy "a towering figure" who "leaves a unique legacy that will be impossible to match."

Scott, too, paid homage, calling Leahy "an incredible champion for Vermonters" whose work has helped position Vermont "to come out of this pandemic stronger than before and tackle big challenges from broadband and infrastructure to the opioid crisis. We are indebted to him."

On the U.S. Senate floor on Tuesday, Leahy told his colleagues that he was gratified to witness how initiatives that Vermont values — including reforming criminal justice, sourcing organic food and resettling refugees — have caught on across the nation.

"Here is where a small state like Vermont has not just a seat at the table, but a voice at the table," he said.

The original print version of this article was headlined "Holy Retirement! | Leahy's decision not to seek another Senate term sets off a scramble to succeed him"