Leahys in Love: A Senator and His Spouse Weather Cancer 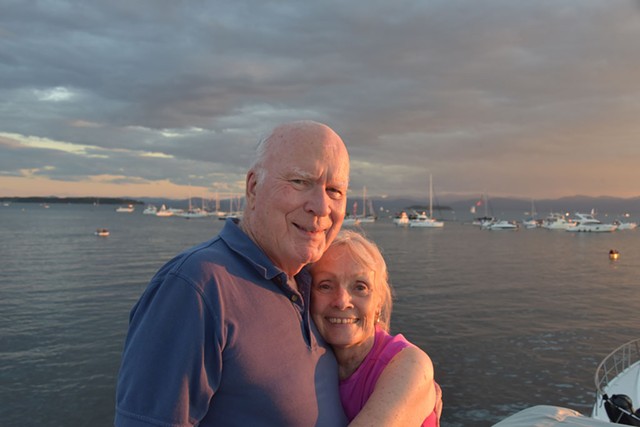 On August 25, Sen. Patrick Leahy (D-Vt.) and his wife, Marcelle, will celebrate a milestone that few people reach: their 55th wedding anniversary. They remain very much in love, and, although the senator is the one in the spotlight, they consider themselves equal partners in life.

For the past 14 years, however, there's been a bit of a shadow overhead. In 2003, Marcelle Leahy was diagnosed with melanoma, a type of skin cancer that can spread. It was successfully treated, but there's the constant threat of recurrence.

In a joint telephone interview last spring — Marcelle Leahy was at their Virginia home; the senator at his office in Washington, D.C. — they both acknowledged their mutual concern.

"We worry about each other, and our kids do, too," he said. "We try to take care of each other."

"I worry about losing my spouse almost on a daily basis," she said.

It's the inevitable downside of a lifelong relationship that's been the bedrock of Sen. Leahy's political career.

"They function as a unit at all times," says Carolyn Dwyer, Leahy's campaign manager since 1998. "They just enjoy being together. There is no space between the two of them."

Beltway lobbyist Luke Albee, who served on Leahy's Senate staff for more than two decades, says the Leahys were considered a team. "Having sat in on hundreds of scheduling meetings, the No. 1 question is: Is Marcelle able to do it with him?" Albee says. "Because if she is, it maximizes the chance that the event is going to be good. To the extent that there's a Patrick Leahy whisperer, it's Marcelle."

Matt Gerson, a former Leahy aide-turned-lobbyist for the Universal Music Group, points to an advertisement for Leahy's 2016 reelection campaign. It's set in a school cafeteria, where the couple are lunching with schoolkids. At the end, he pilfers a piece of food from her plate. They share a laugh, and she leans her head into his shoulder.

"It wasn't scripted," says Gerson. "You can't fake that ... It's like they're high school sweethearts still."

"They are a strong couple, and to me they epitomize the word 'partnership,'" said longtime Leahy friend Sen. John McCain (R-Ariz.), in an interview before his recent diagnosis with brain cancer. "Pat would be the first person to tell you his effectiveness as a U.S. senator has been dramatically enhanced by the wonderful relationship that exists between the two of them."

The Leahy-McCain ties go deep. They've served together in Congress since the early 1980s. But they also share up-close-and-personal experience with melanoma. McCain has had four melanomas, the first in 1993. He refers to Marcelle Leahy as his "melanoma buddy."

Her health scare began in January 2003 with a routine dermatology appointment that led to the cancer diagnosis. She wasn't out of the woods until July of that year, but she considers herself lucky. "It went on for a while, but my treatment was surgery," she noted. "I never had to have chemotherapy or radiation."

She still faces a lifetime of medical vigilance. She visits a dermatologist at least once every six months, and almost every time she has to have something removed or tested.

"I've managed to crop up with all three kinds of skin cancer," she said.

Her husband laughed. "Lucky you!"

The Leahys are strong advocates for cancer research and prevention — but their dedication began long before 2003.

"Before Marcelle's diagnosis there was Pat Barr," says Dwyer. Barr was a Bennington resident, a longtime Democrat and a Leahy supporter who was diagnosed with terminal breast cancer in 1987 and given five years to live. She survived for 16 years and spent much of her time as a fierce advocate for breast cancer research.

"She went to the senator and he became her champion," says Dwyer. The two of them fought for increased federal funding to fight breast cancer, and Leahy continues that fight to this day.

"I'm not going to have the scientific ability to cure cancer or help somebody with cancer, but I do have the ability to get resources for people with cancer," he said. "And in whatever remaining years I'm here, I intend to use that."

The Leahys are also active in non-governmental fundraising. They are staunch supporters of Tracy's Kids, a nonprofit founded and led by Gerson, a childhood cancer survivor. The group provides art therapy for children with cancer and their siblings. Marcelle Leahy has served on its board of trustees from day one.

Marcelle Leahy is often called upon to speak in public, which isn't her forte. "She's naturally a shy person," says Albee. "This is one of those issues where she really, really found her voice."

She's also active in simple ways, like keeping a basket of sunscreen at their front door.

"Our children and grandchildren all get the lecture," said Sen. Leahy. "They all get slathered with sunscreen. It'd be like, 'Okay, here she comes! Put the sunscreen on!'"

"She has this way of getting people to immediately put a note in their appointment book," says Theresa Alberghini DiPalma, a former Leahy staffer who's now senior vice president for marketing and external affairs at the University of Vermont Health Network. DiPalma is dark-skinned and never thought of seeing a dermatologist until Marcelle Leahy insisted. "And oh, my God, I was told I had melanoma. So if it wasn't for her, I ... don't know if I would have gone," she says, fighting back tears.

Marcelle Leahy said her involvement is only natural.

"It seems like cancer is a club that nobody wants to join, but once you're there you have an understanding," she said. "You have cancer; I have cancer; we're survivors. It's that instant bond."

That's wonderful, but still, it's cancer. She will be at risk for the rest of her life. That's got to occupy some small dark corner of the Leahys' minds. They've been inseparable for their entire adult lives — but time passes, and the ultimate separation looms.

"Everybody dies at some point," says Albee. "And what's clear for both of them is, whenever that time comes — we hope it's not for many, many, many years — there will be a huge void. There's no question about that."

A longtime fixture of the Statehouse scene has taken a new job. Sara Teachout, who spent 16 years in the legislature's Joint Fiscal Office, is now head of government, public and media relations for Blue Cross and Blue Shield of Vermont.

It's a big change in a couple of ways. First, JFO staff members generally don't speak to the press. Now, communicating with reporters is part of Teachout's job.

But it's not the biggest part. "The primary focus is during the legislative session, tracking bills that affect health care," she says.

You may recall that Vermont's shiny new ethics law bars former lawmakers and executive officers from becoming lobbyists for at least one full year. It was meant to block the "revolving door" between public service and lobbying. But the one-year rule does not apply to legislative staffers or other state employees.

Teachout started at Blue Cross on June 19, when the legislature was still trying to close the books on the 2017 session.

Not only that, but she agreed to take the new job in March — and continued to serve in the JFO for three full months. She did reach a written agreement with her boss, Stephen Klein, barring her from any involvement in health care issues for the remainder of the session.

"We wanted to avoid any appearance of conflict," Teachout says. "Steve was very conscientious about conflict when he asked me to stay on."

Klein and Teachout took care to avoid conflict before she left the JFO, but next January she'll be lobbying the people she used to work with.

Paul Burns, executive director of the Vermont Public Interest Research Group, presents a case for legislative staff to be included in the one-year rule. "Legislators generally give great deference to the staff at Legislative Council and JFO," he says. "The revolving door policy should probably cover JFO and Legislative Council as well."

Teachout understands the concern but doesn't believe there will be a conflict. "I focused on tax policy [at JFO]," she explains. "I didn't work on health care issues, so I'm switching areas as well as roles."

Certainly true. But she was a trusted resource for lawmakers for many years. The next time they see her, she'll be representing a special interest.

Well, the 2018 campaign has spawned its first dirty trick.

But the website is a phony. It's an all-out, mean-spirited attack on Ehlers the person and the political activist.

For instance, the site's motto is "Crazy You Can Believe In." Its mailing address is 350 Fisher Road in Berlin – the Vermont Psychiatric Care Hospital.

Because, you know, mental illness is funny.

"Bush league stuff, really," says Ehlers, who calls the website proof that "Vermont is no longer an island" protected from the harsh realities of national politics.

The site is also in violation of state campaign law, according to Will Senning, the Secretary of State's elections director. "I believe it constitutes electioneering," he says. "That includes material that supports or attacks a candidate."

Any such material must name the responsible party and provide contact information. The website's information is clearly fictitious, but "We don't check addresses on every election piece that comes out," says Senning. If a complaint is filed, the secretary of state would refer it to the Office of the Attorney General for investigation.

Ehlers won't be filing. "I'm not going to spend any more time on it," he says.

We won't either, although we'd love to hear from its creator. Hey, "Stan," if you're proud of your contribution to our political culture, step out of the shadows and give us a call.