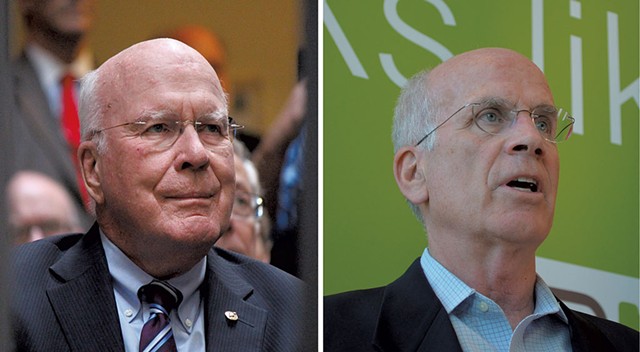 Sen. Patrick Leahy (D-Vt.) is defending his role in crafting a bill that sparked deep divisions among congressional Democrats. In fact, it prompted Rep. Peter Welch (D-Vt.) to take the rare step of voting against a Leahy-backed measure.

The bill, which provides funding to ease the humanitarian crisis at the southern border, passed the Senate last Thursday by a vote of 84-8. Those not voting included Sen. Bernie Sanders (I-Vt.) and the six other senators running for president; they were in Miami for the Democratic debates.

"It was the best we could do," Leahy said in an interview Saturday, speaking of the $4.6 billion measure. As the ranking Democrat on the Senate Appropriations Committee, Leahy worked with committee chair Sen. Richard Shelby (R-Ala.) to craft a bill acceptable to majority Republicans. Senate Majority Leader Mitch McConnell (R-Ky.) had labeled the Senate bill as "the only game in town."

On Friday, the House approved the bill on a 305-102 vote: Virtually all Republicans voted yes, along with 95 members of the Democratic majority. (President Donald Trump signed the bill on Monday.)

After the vote, the Congressional Progressive Caucus blamed Speaker Nancy Pelosi (D-Calif.) for failing to keep Democrats together in support of a tougher bill. Earlier in the week, the House Appropriations Committee had approved a measure including new requirements for the care of undocumented immigrant children, restrictions on detainee shelters and a guarantee of certain services, including translators. Pelosi shelved the bill after the Senate's lopsided vote.

"I don't think [House dissenters] realize how much protection we put in the bill," Leahy said. "Requiring standards that were not there before. Requiring time limits [for holding people in custody] and staff who are properly trained." Leahy noted that he would have preferred the House version and promised to fight for more protections.

His stance could cause some blowback on the home front. On Tuesday, the Peace & Justice Center and the Women's March Vermont held Close the Camps rallies outside Sanders' and Leahy's Burlington offices.

Welch, who frequently makes common cause with House moderates, did not do so this time. His vote against the Senate bill, he said, stemmed from his June 2018 visit to the border, when he saw "children in cages in windowless warehouses. It was appalling ... Recent reports indicate that it's gotten worse."

Still, he said he understood Leahy's position. "It's the art of the possible," Welch said. "Patrick did an incredible job getting the amount of humanitarian relief he did. In the House we had the votes to pass tougher standards, but the Senate is controlled by Mitch McConnell."

Leahy and Welch agreed on one thing: They don't trust Trump. "I've served under eight presidents," said Leahy. "They might disagree with you, but they follow the law. Trump is the first president who ignores the law."

Even so, they asserted, enacting standards is worthwhile. "If we get a law and Trump ignores it, we have the ability to go to court to enforce the law," said Welch.

Which seems like cold comfort, given continuing reports of deplorable conditions at the border and this week's news of a secret Facebook group of current and former U.S. Border Patrol agents that's awash in racist and sexist material. Welch and Leahy are staunch defenders of the legislative process. That's a noble sentiment. But in the age of Trump, that process seems rather quaint.

A Dearth of Vetoes

Gov. Phil Scott has now had his say on every measure passed by the Vermont House and Senate this year. He chose to veto only two bills: one that would have established a 24-hour waiting period for handgun purchases, and another that would have required polluters to pay medical-monitoring expenses for those who may have been exposed to toxics.

It's a marked decline from his 2018 total of 11 vetoes, which tied Vermont's all-time record set in 1994 by then-governor Howard Dean. Does this reflect a thaw in executive-legislative relations?

"The governor came into the session with a consistent approach that he carried throughout the session," said Rebecca Kelley, Scott's spokesperson. "I definitely think the governor altered his approach and tone [this year], and we absolutely feel the goodwill was reciprocated."

Senate Majority Leader Becca Balint (D-Windham) agreed. "We felt we had much more communication with the administration," she said. "In the past, we were feeling around in the dark. Very big difference."

Hugs all around, then?

Not quite. House Majority Leader Jill Krowinski (D-Burlington) noticed a much more collaborative approach through most of the session — but an administration pullback as the end grew near. When lawmakers were working out the details of key bills, she said, "We weren't getting clear signals on what would be acceptable."

In any case, the veto number is a bit misleading. Three major proposals that could have faced vetoes — a minimum wage increase, a paid family leave program and a state-regulated cannabis marketplace — fell short of final passage.

There's no doubt that executive-legislative relations were better this year. But 2020 is campaign season, and Scott may draw firmer lines in the sand. Last week, VTDigger.org reported that Scott has ordered his top officials to plan for reducing an anticipated budget gap over the next five years, due to an administration projection that spending may outpace revenue by $255 million in 2025. That could signal a return to the budget battles that characterized the governor's first term.

For its part, the Democratic majority may be more inclined to force uncomfortable choices on Scott. At the very least, he's likely to face those three bills that died in the Statehouse this year. "I'm looking forward to the next session, passing those bills and getting them to his desk," said Balint.

One thing's for sure: The more collaborative approach of 2019 will be put to the test in 2020.

The first milestone of Vermont's election season passed quietly Monday night — the initial campaign finance deadline of the two-year cycle. There were no bombshells. No one filed as a candidate for governor save the incumbent. But there were some noteworthy figures.

Two potential gubernatorial candidates enter the cycle with healthy surpluses from previous campaigns. Scott has $106,000 in cash on hand. He reported another $16,000, thanks to a "reimbursement for over-billing" from Optimus Consulting, the Washington, D.C.-based firm that handled his media buys. His campaign also received two $1,750 contributions from Davenport Solar and Randolph Center Solar, a pair of LLCs that share an address in Juno Beach, Fla. Both are subsidiaries of NextEra Energy, a giant firm that claims to be the largest renewable energy producer in the world. It owns multiple nuclear power plants, including New Hampshire's Seabrook. And it's involved in three proposals to build large-scale solar arrays in Vermont.

Scott's reserve looks puny compared to Attorney General T.J. Donovan's war chest. Over the course of two low-stress campaigns for AG, Donovan has accumulated a surplus of $227,000. That'd be a nice down payment on a race for governor, which the Democrat is actively considering. Donovan raised another $800 this year, including a $500 check from, hmmm, Davenport Solar.

Progressive/Democratic Lt. Gov. David Zuckerman, who's also mulling a run for the corner office, ended 2018 with a $37,000 surplus and has raised less than $1,000 since then.

A few items stood out in legislative filings. House Speaker Mitzi Johnson (D-South Hero), who was targeted by state and federal Republican groups last year, raised nearly $30,000 for her 2018 campaign. That's a staggering sum for a House race, where $5,000 is considered big money. And Johnson spent less than half of her bankroll, so she enters the 2020 race with $16,000 in the bank. Might scare off any Republican challengers.

Democrat Marina Meerburg, who ran a spirited but unsuccessful race against Rep. Heidi Scheuermann (R-Stowe) last year, reported a $3,700 surplus and noted that the money "will be carried forward to the new campaign." Seems to portend a sequel in 2020.

Finally, there's Brian Shelden, an Essex software developer planning to run for the House as a Democrat in the Chittenden 8-1 district. The district's two seats are currently held by Reps. Marybeth Redmond (D-Essex) and Linda Myers (R-Essex Junction). Democrats hope to take both seats next year, and Shelden has already raised $3,400. That's a heady sum for a rookie candidate, not to mention an incredibly early start for any legislative hopeful.

The state Democratic and Republican parties each filed state campaign finance reports, but they handle the bulk of their finances through federal committees in order to comply with U.S. election law. When their federal reports are filed on or before July 15, we'll have a clearer picture of their overall finances.

One fascinating tidbit from the state filings: The VTGOP raised a total of $25,000 in the six-month reporting period, and more than half of that — $13,000 — came from True North Reports, which is supposedly an online news outlet. True North has a clear conservative bent, but a news organization giving big money to a political party seems a little ... shall we say... blatant?

True North has not responded to requests for comment.

The writers' room at Seven Days is a little more crowded these days, thanks to the hiring of two full-time staffers on the features team.

Food writer Jordan Barry is a Vermont native and University of Vermont grad who moved to New York City six years ago and wound up working on food-related podcasts. "She doesn't have a lot of print [experience]," said Seven Days cofounder and coeditor Pamela Polston, "but we gave her a couple of freelance assignments, and she nailed them."

Barry's new job is, literally, a dream come true. "In college, I had a dream that I was hamburgers and white wine critic for Seven Days," she said.

Margaret Grayson is the other new addition to the arts and culture desk. She's the second person hired straight out of Big Sky Country this year. Not coincidentally, she and the other Montanan, news writer Derek Brouwer, are a couple.

Grayson gained her journalistic chops at the University of Montana's student paper. "I spent most of my time covering hard news, especially administration and finance, which were a mess at the time," Grayson said. She got into feature writing as an intern at the Missoula Independent, where Brouwer was a staff reporter until the paper closed last year. Features, she realized, "gave me more opportunity to follow my curiosity."

Polston is impressed by that curiosity. "She's already been out there finding stories and getting involved in the community," Polston said.