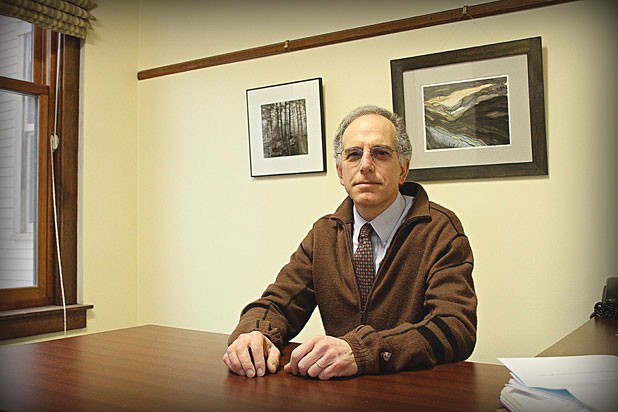 Jim Dumont says his 88-year-old father, Allan, became known as “the patron saint of lost causes” during his career as a surgeon at a Manhattan hospital for the indigent and the working class. That description doesn’t apply to Allan’s son, who can boast a number of victories as Vermont’s most in-demand public-interest lawyer.

His most memorable win capped a multiyear battle in state and federal courts, in which he helped the Cree protect their native lands from a massive power project developed by Hydro-Québec to deliver electricity to Vermont. “They succeeded through hard work and nonviolence in beating a powerful entity,” Dumont says of the Cree legal victory.

In fundamental ways, however, Dumont is very much his father’s son. He cites Allan as his role model for living a life dedicated to helping the little guy. “He could have worked privately and made a lot more money, but I don’t think he ever had a private patient,” Dumont says of his dad, who now lives in retirement in Maine with Dumont’s mother, Joan. She worked as a school guidance counselor and was also active on HIV/AIDS issues.

Dumont, 59, mirrors his parents’ model as a lawyer advocating on behalf of prison inmates, Canada’s Cree and local groups in Vermont fighting developers, utilities and the United States Air Force. He’s currently in the thick of several simultaneous legal rumbles. Dumont is representing Burlington-area opponents of the F-35 fighter-plane bed down; they tentatively plan to circulate a controversial Dumont-authored petition at polling places on Town Meeting Day. He is also taking on Entergy, owner of the Vermont Yankee nuclear power plant; the Hannaford supermarket chain, which is trying to build a store in Hinesburg; and Dollar General, which wants to open outlets in Ferrisburgh and Chester. With help from two paralegals, Dumont also handles civil cases from his law office in Bristol.

“Jim’s known in the legal community as incredibly tenacious,” says Brice Simon, an attorney who’s on the same side as Dumont in a Public Service Board case on Yankee’s bid to renew its state operating license. “He’s very detail oriented, very smart. If you’re facing off against Jim, your tendency will be to settle.”

New England Coalition activist Ray Shadis, who has been fighting Vermont Yankee for four decades, describes Dumont as “creative and always willing to do the hard, tedious work of combing through a case history.” Although he’s watched Dumont in action for several years, Shadis says, “The one thing you can expect from Jim in court is surprises.”

Dumont’s doggedness and meticulous preparation were on display at a Public Service Board hearing last week, where he was representing the Vermont Public Interest Research Group in its attempt to scuttle Vermont Yankee’s petition for a 20-year license extension. Though he never raised his voice, Dumont relentlessly grilled John Herron, Entergy’s chief nuclear officer. The attorney questioned Herron on Entergy’s false statements to regulators concerning the nuke plant’s underground piping carrying radioactive material — untruths that Herron characterized as “miscommunication.”

“Is there a difference to you between miscommunication and providing inaccurate information?” Dumont asked Herron at one point.

The witness waited at least 10 seconds before answering, “I think you’re right. It might have been better worded … Something was missed in our process.”

Dumont is a formidable foe in any legal confrontation, says Greg Marchildon, director of the Vermont chapter of the American Association of Retired Persons, which Dumont represented in its effort last year to force two merging utilities to refund $21 million to ratepayers who bailed them out years earlier.

“Some people view Jim’s manner as off-putting because he’s so determined,” Marchildon comments. “But that comes from the buttoned-down, suit-and-tie lawyer class.”

Dumont is demonstrably not a member of that class. In a room full of tailored men and a few women at last week’s Yankee hearing in Montpelier, Dumont was wearing running shoes and a rumpled brown sports jacket perfectly mismatched with baggy gray pants. His legal acumen clearly surpasses his fashion sense.

“Jim has the heart of an advocate,” adds Marchildon. “He cares deeply about the issues he’s involved in. He doesn’t make it up.”

Peter Zamore, a Burlington attorney who represented the utilities in the action brought by AARP, says he “can see how [Dumont] might be considered aggressive.” But Zamore adds that he respects Dumont’s legal abilities, calling him “brilliant, creative and energetic.”

Dumont’s political strategizing may not be as deft as his legal maneuvering, however. Jimmy Leas, a lawyer active in the F-35 opposition, says Dumont conceived the push to force a referendum in Burlington that would reduce Burlington International Airport’s annual construction budget to $1 if officials accede to the Air Force’s basing of F-35s there. Voters may encounter F-35 opponents at polling stations on March 5, urging them to sign petitions calling for such a referendum.

Leas describes Dumont as “a brilliant attorney,” but it remains to be seen whether Burlingtonians will endorse a move to starve the airport of funds.

Over lunch at Montpelier’s Thrush Tavern following his grilling of the Entergy executive, Dumont traced the development of his peerless reputation for do-good lawyering in Vermont.

“It was suffocatingly hot,” Dumont says of that 1978 train ride. “I decided this was not how I wanted to live.”

So he applied for clerkships with every federal judge in New England. Chief Judge James Holden hired him to work in Rutland for the U.S. District Court for Vermont. The move has proved entirely satisfying for Dumont, who raised three children in Lincoln with his wife of 27 years, Karen Lueders. “Vermont’s such an amazing place,” he muses over his meal at the tavern. “I love living in a place where the only thing people won’t tolerate is intolerance.”

After a year of clerking for Judge Holden, Dumont got a job as a public defender in Burlington and plunged into work on behalf of clients with backgrounds similar to those of his father’s former patients. Dumont recalls defending clients in 22 jury trials in the space of two years.

He also played a peripheral role in Bernie Sanders’ historic 1981 mayoral victory. Dumont remembers being awakened on election night by Sanders legal eagle John Franco, who was urgently seeking to impound the mayoral ballots. Franco feared Sanders’ 10-vote margin of victory might somehow be erased by the local Democratic machine and needed Dumont’s help in getting a late-night court order. Wearing pajamas and a parka, Dumont tramped to the site of the Sanders celebration to have the tenuously victorious candidate sign the legal documents needed to seal the ballots.

In 1981, William Sessions invited Dumont to become the third attorney in his Middlebury criminal-defense firm. “Bill was a wonderful mentor,” Dumont says of the man who now serves as chief federal judge for Vermont. “I handled everything from drunk driving to murder cases.”

Dumont opened his own law office in 2003. It’s situated in the former National Bank of Bristol building on Main Street. Inside is a massive bank vault that’s kept open and usually graced with a floral array. Upstairs is an art space, the WalkOver Gallery, run by Lueders.

How can Dumont manage to preside over a private practice in Bristol while also regularly litigating in Montpelier and Burlington?

“I often work seven days a week,” Dumont says in between bites of salad and sips of milk at the Thrush. “I’ve got a very understanding spouse.” (Lueders is an attorney as well as a gallerist.)

Despite his stamina and resourcefulness, Dumont doesn’t win ’em all. He lost the AARP’s $21 million rebate case against Central Vermont Public Service, for example. But Marchildon doesn’t hold a grudge. “Jim has won some and lost some during the 15 years or so he’s been working with AARP,” the association’s state director says. “Not once have I felt in all that time that Jim was unprepared.”

Dumont doesn’t work pro bono for the advocacy groups he represents, though he typically charges less than he can make in private practice. VPIRG director Paul Burns won’t disclose what his organization is paying Dumont in the Yankee case but says, “With Jim, we always get more than we’re paying for. Jim’s been at it for a long time, but, unlike a lot of lawyers, his moral compass is still intact.”

There are cases Dumont won’t take. He turned down a request to represent opponents of ridgeline wind power. “I just couldn’t see giving my time and skills to an effort to stop wind power in Vermont,” he explains.

Although he’ll hit 60 in two months, Dumont gives no thought to taking down his shingle. “Why would I retire?” he asks rhetorically. “I’m having way too much fun. When they put me in my grave — that’s when I’ll retire.”