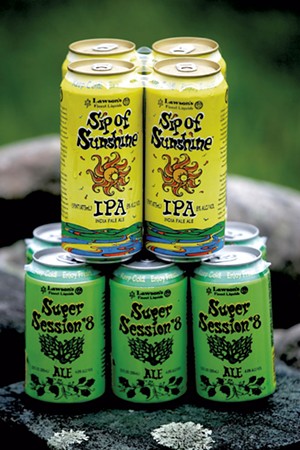 Lawson's Finest Liquids, brewer of Sip of Sunshine, Super Session and more, announced Monday that it is expanding distribution of its beers in Vermont. Through Waterbury-based VT Beer Shepherd, Lawson's will be distributed to the state's northern and southern reaches, including St. Johnsbury, St. Albans, Manchester and Bennington, according to a news release.

Sean Lawson, founder of the Warren-based brewery, is quoted in the statement as saying, "The team at [VT] Beer Shepherd shares our commitment to proper handling of the highest quality beer to ensure customers receive it exactly the way the brewery intends — cold and fresh — consistently delivering the experience that discerning craft beer drinkers seek."

Lawson noted to Seven Days that he and his wife, Karen Lawson, "will continue to bring Lawson's Finest beers to existing customers in the Burlington, Waterbury, Montpelier, White River Junction and Brattleboro areas, including points in between" using their Vermont wholesale distribution company, the Beer Guy.