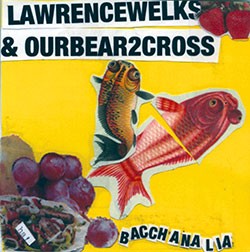 Distortion Mike (or Gregor; the liner notes are unclear) howls unintelligibly on “Feel This Way” while fuzzed-out circus synth sours the mix. It may be a cry for help, but his screamo hysterics could alienate once-proud family members. And while there are whispers of merit in the laughably maudlin “Why Can’t the World Just Love,” reality soon sets in. This aberrant noise isn’t a novelty … it’s the album!

Only disciples of the truly peculiar (see: Mr. Bungle) will dig such atonal grime-pop. Bacchanalia is loud and hell-bent, with enough Jack-in-the-box lunacy to warrant straitjackets. Are those clarinets or kazoos amid the ghoulish delirium? Does it really matter? These muddled, electronic rants seem to have crept from some Casio keyboard onto a cheap four-track. Even the desperate ballad “When I Saw Your Face” sounds like it was shouted from within a closet.

Though the disc is a mercifully brisk 33 minutes, these aural hallucinations take their toll. Imagine being trapped in a roomful of mirrors that scream at you just for looking at them. My advice: Pause frequently and open the drapes to confirm that, outside, the sun still shines.

Perhaps Bacchanalia is a Rorschach test for the listeners — an unfiltered sensory stunt meant to expose us. We’ll never know. Brash titles such as “Sh’aint Ya Daughta No Mo’ (Shez Mine!)” imply humor, but the lyrics are indecipherable and take the laughs with them. It’s all a bit unhinged. In open mockery of convention, the Welks do, indeed, have a bear to cross, and they cross it. And then smack the beast on the nose for good measure.

Listeners will surely despair under the grip of this deranged production. Poor Lawrence Welk (the television impresario who raised our parents) wouldn’t know what to say — and maybe that’s the point. These Welks make war on melody, turning square sounds into madhouse fringe. They plunge us into the abyss, perhaps gleeful if we shriek with disgust. Musical miscreants will no doubt swoon. For the rest of us, it’s an experiment best left behind.