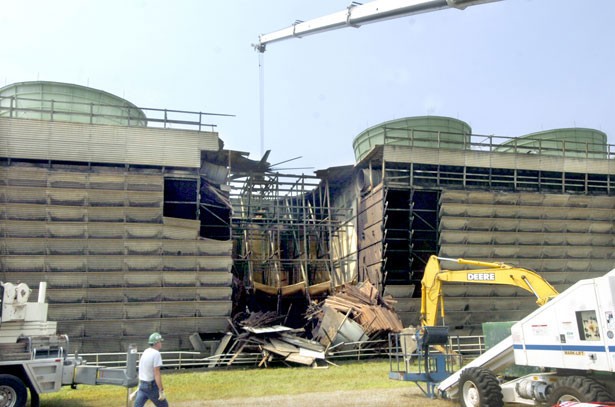 Last week, the Senate Finance Committee began investigating recent reports that the Vermont Yankee decommissioning fund might not contain enough money to close the nuclear plant when its current license expires in March 2012. That inquiry has fueled suspicions about an application by Entergy, the plant's owner, to spin off Vermont Yankee into a new corporate entity. Critics of the deal warn that if there's a major accident, or the new company goes bankrupt, Vermonters could find themselves liable for tens of millions of dollars in future decommissioning costs.

On January 28, Entergy Corporation, the parent company of Entergy Nuclear-Vermont Yankee (ENVY), filed an application with the Vermont Public Service Board (PSB) requesting permission to spin off its Vernon nuclear plant into a separate holding company. The new, spin-off company, tentatively called "Newco," would own all of Entergy's so-called "merchant" nuclear facilities around the country, including Vermont Yankee. Merchant plants, unlike those that are owned and operated by utility companies, sell their power on the wholesale energy market. Jay Thayer is Entergy's vice president of nuclear operations. He says that Vermont Yankee would be run by the same employees, and nothing at the plant would change in terms of safety or reliability. The purpose of the spin-off, Thayer told lawmakers, is to create a "pure nuclear company" that is more attractive to investors.

Some committee members were clearly uneasy about the proposed legal structure of Newco, a limited liability corporation, or LLC. As the name suggests, an LLC is a business entity that's used to shield the assets of its parent corporation from the liability of significant financial risks. Several senators voiced skepticism about the arrangement, suggesting that if a major accident or environmental problem arises at Vermont Yankee, Newco could declare bankruptcy and leave Vermonters "holding the bag," as committee Chair Ann Cummings (D-Washington) phrased it.

Senator Hull Maynard (R-Rutland) used the analogy of the Killington ski resort, which was sold last year to a Utah business interest. "They bought assets from the corporation that had run Killington, and everybody presumed they bought everything," Maynard said. "But lo and behold, after the transfer was made, there were hundreds of season-pass holders who were left out there to dry because those assets and responsibilities didn't move." Concerning this deal, he mused, "It makes me wonder, what's getting left behind?"

But Thayer insisted that the spin-off proposal places no added burden or liability on Vermonters. He pointed out that the deal must first get approval from federal and state regulators, including the Nuclear Regulatory Commission, the Federal Energy Regulatory Commission and the PSB. "There are going to be a lot of eyes on this transaction," Thayer said.

"We're the second-largest nuclear operator in the nation," he added. "We have staked our reputation as a company, and as individuals . . . as safe, reliable, clean operators of nuclear power. To walk away or lessen that liability . . . would be an assault on that reputation, which I or my company would not stand for."

But committee members sounded unconvinced by those assurances. Senator Richard McCormack is a Democrat from Windsor County. "My concern is for a time in the future when you're retired," he said, "and when we confront the guy at the end of the table about your commitments, and he says he's never heard of you."

McCormack noted that many Vermonters, including some lawmakers, don't trust the NRC to protect Vermonters' interests. "My sense is that the NRC do not particularly regulate. They expedite, and their understanding of their mandate is to ensure that nuclear power plants keep operating," he added.

Arnie Gundersen, a nuclear-industry expert, testified by phone that there are many examples of energy companies transferring ownership of nuclear assets to LLCs - and ample causes for concern. Gundersen told the committee that Newco would result in "seven layers of LLCs" between Vermont Yankee and its parent, Entergy, making it potentially costly and time-consuming for the state to try to recoup future cleanup costs.

Gundersen cited the findings in a 2002 report by Synapse Energy Economics, which is highly critical of the growing trend of LLCs in nuclear plant ownership. Among other things, that report concluded that NRC reviews of such deals "are inconsistent and may be too limited" to protect ratepayers. It also found that the use of LLCs raises concerns about security, safety and potential consumer liability.

"Regulating in this way is like driving drunk," writes Peter Bradford, a former NRC commissioner in the report. "Taxpayers, utility customers and power-plant neighbors who thought themselves protected by firm requirements may one day wear the stunned expressions of Enron retirement-plan holders or Worldcom investors."