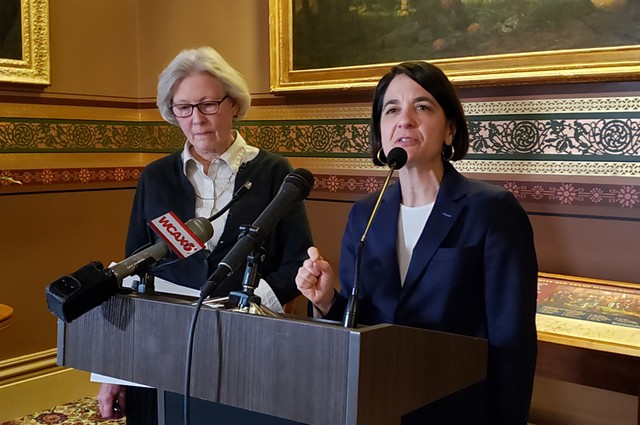 Vermont lawmakers on Wednesday pushed back against criticism from Gov. Phil Scott that their proposed $8 billion state budget and $200 million pension rescue plans have some major holes in them.

Senate President Pro Tempore Becca Balint (D-Windham) said lawmakers have been diligently assembling next year’s budget to “make sure our fiscal house is in order” and predicted that the differences between the legislature and the administration would be ironed out in coming weeks.

“We’re going to get to yes. We always do. We’re going to figure it out,” Balint said from the Cedar Creek Room of the Statehouse. “We’re going to stay engaged with the executive branch, and we will pass a budget.”

For example, Scott proposed a 3 percent budget increase for agencies such as those that provide mental health services and long-term care for the elderly. The House increased that number to 7 percent, and the Senate bumped it further to 8 percent.

Testimony from the agencies made it clear that inflationary pressures and workforce shortages leading to lower service levels meant the administration’s proposal wasn’t going to cut it, Kitchel said.

"Those agencies said, 'In this day and age of increasing operating costs and wages, 3 percent is actually putting us even more underwater,'" Kitchel said.

Their comments responded to criticism Scott leveled during his Tuesday press conference, when he expressed concern about the current budget bill and lawmakers’ pension reform plan. Lawmakers and the administration are considering how to spend tens of millions of dollars in pandemic relief funds, a historic budgetary surplus.

Scott Says Budget Windfall Presents a ‘Transformative Moment’
By Kevin McCallum
Off Message
While the Senate budget bill was better than the House’s, Scott said, there were still “some major differences” from his January proposal that concerned him. He characterized lawmakers as “focused on government systems” while his budget tackled important climate and housing goals, and freed people and businesses from burdensome taxes.

“It’s really important, from my standpoint, to take full advantage of this once-in-a-lifetime opportunity to grow the economy, revitalize communities and make Vermont more affordable for workers, families and those who create jobs,” Scott said.

Lawmakers and the administration have broad agreement on the need to spend more than $200 million in climate initiatives such as weatherization and expansion of electric vehicle infrastructure, as well as $95 million to boost broadband networks.

But Scott also proposed a number of tax relief measures that lawmakers have not embraced, including eliminating taxes on military pensions, increasing social security exemptions, and tax credits for nurses and childcare workers.

The Senate is working on a more limited suite of tax relief not based on someone’s occupation, but on need, Balint said.

“I want to make sure the tax policy that we move forward is really going to those Vermont families that are most in need of relief,” she said.

Other noteworthy spending in the Senate bill includes $100 million for workforce and economic development, a $15 million bump for the Vermont State Colleges System, and increases in funding for court security.

Balint and Kitchel also pushed back on Scott’s critique of the pension deal. He called it a “$200 million Band-Aid” that lacked the structural reforms that would prevent the problem from returning in future years.

“This bill doesn’t solve the problem, and in five to 10 years, the necessary fixes will be much tougher for both taxpayers and state employees,” he said.

Scott argues that without giving workers the choice to enroll in 401k-style plans  instead of state pensions, the annual costs — which have doubled since he first took office — will only continue to balloon.

Such plans are easier for employees to take with them when they leave state service, and let them control how they invest their retirement funds instead of relying upon a set benefit amount from the state, he argued.

Lawmakers Seek Solutions to the Public Pension System’s Poor Investment Returns
By Kevin McCallum
Economy
Lawmakers' plan, in addition to pumping $200 million into the system, requires employees to increase contributions and scales back some benefits for younger workers in an effort to bring the funding back into balance. Combined, the changes are estimated to shave $1.7 billion in debt from the system.

And there would be structural reforms, Kitchel said. A new oversight board would require more frequent review of pension investment returns, and pre-funding health care benefits for retirees would reduce costs significantly, Kitchel said.

“I think, in the end, the governor is going to see that the time to get on board has already passed,” Balint said.