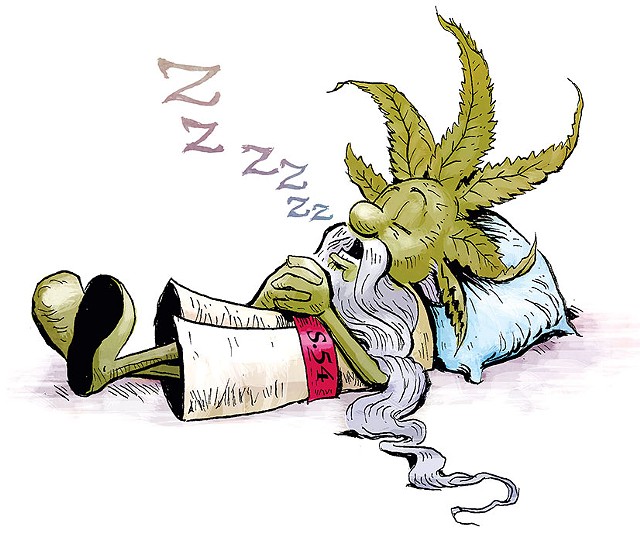 The Vermont legislature came within arm's reach of legalizing cannabis sales this spring. Both the House and Senate passed versions of a bill that would set up a retail system, and long-skeptical Gov. Phil Scott appeared willing to at least consider whatever legislation landed on his desk.

But before lawmakers could finalize their proposal, the coronavirus pandemic hit. Suddenly faced with a tumbling economy, surging unemployment and allocating a billion-dollar relief package, top lawmakers said they had little time to wade into the weeds of a retail cannabis market. Pot became an afterthought.

Months later, ahead of a brief remote budget session, Democratic leaders are facing renewed pressure from advocates and members of their own party to finish what they started. Some believe a retail cannabis market could be a cornerstone of Vermont's economic recovery efforts.

"The reasons for [setting up the market] have only gotten stronger," said Matt Simon, a registered lobbyist and the New England political director of the advocacy group Marijuana Policy Project. "There is a need to get jobs and tax revenue right away. There should be a sense of urgency to do this."

Vermont's pursuit of a retail weed market has been anything but urgent to date. Though the Senate repeatedly passed tax-and-regulate bills before this year, the legislation always died in the House. In 2018, when Vermont became the first state in the nation to legalize the possession and cultivation of weed through legislative action, lawmakers again chose not to establish a legal way for people to purchase the drug. Critics say that has led to the worst-case scenario: an empowered black market untouched by regulation or taxes.

S.54, the latest bill intended to change that, finally cleared the House in late February. But before lawmakers can send it to the governor, they need to reconcile the differences between their versions. A failure to do so before the budget session ends would force lawmakers to restart the process next year.

In March, the House and Senate each appointed three members to a conference committee, whose job it is to hash out a compromise. Since the bill originated in the Senate, the House must schedule the committee's first meeting, according to Sen. Dick Sears (D-Bennington), who was appointed to the panel.

But when Sears asked for a sit-down before the legislature went on a two-month break in late June, he said, he was told that the House negotiating team could not get approval from Speaker Mitzi Johnson (D-South Hero).

Sears had still not heard from his House counterparts as of last week. "We're still arguing about the size of the table," he said in jest.

Johnson told Seven Days that she and Senate President Pro Tempore Tim Ashe (D/P-Chittenden) agreed back in the spring not to take up the weed bill again until late summer. She said Sears' request amounted to an "internal" miscommunication with Senate leadership.

"It was always part of the plan to figure out how to do this in August," she said. Ashe confirmed the speaker's recollection.

Johnson has acknowledged that retail weed does not rank high on her priority list. Her stance has not earned her fans among the pro-pot crowd: Many blamed her when S.54 sputtered out in the House last year, and few were pleased when she would not commit at the start of this session to bringing the bill to a vote, citing concerns over the impacts on highway safety, youth usage and the environment.

Johnson has maintained that her personal views will not stand in the way of the tax-and-regulate bill. Asked in a May interview with Vermont Public Radio to explain why the conference committee hadn't met, she said she believed that legislative resources needed to be focused on helping Vermonters get through the pandemic.

"We'll get around to discussing it," she said.

Johnson said Monday that the conference committee has clearance to begin meeting anytime, though she did not remember exactly when that message was shared with the House's negotiating team.

Rep. John Gannon (D-Wilmington), a strong supporter of S.54 and chair of the conference committee, told Seven Days last week that he did not know when the committee would hold its initial meeting, or even whether it had Johnson's permission to meet in the first place.

"My goal, hopefully with the speaker's blessing, is to get things moving," he said.

Johnson's office is now working to schedule meetings for all House policy committees through the month of August. Both she and Ashe say they expect the conference committee will begin meeting this month, potentially starting next week.

Committee members will have their hands full once deliberations begin. They must decide on a single tax structure, determine how much local control to give municipalities and settle competing approaches to highway safety.

They also need to consider the market's startup costs. As proposed, S.54 would establish a Cannabis Control Board that would be responsible for regulation and licensing of all stages of the supply chain for legal weed. The overhead costs run just shy of $1 million a year and would not be fully offset by tax revenues until the third year of the market's existence, according to the Vermont Legislative Joint Fiscal Office.

Johnson has questioned the wisdom of running a spending deficit when the state is already facing a budget shortfall; the legislature's economist has projected that Vermont could see upwards of a $400 million loss of revenue in fiscal year 2021 due to the pandemic.

Sears wasn't too concerned, noting that there are ways to spend money in anticipation of future revenue and then pay it back later. "We find money to do all kinds of things, don't we?" he said.

In the long term, supporters of S.54 say, a legal cannabis market would create thousands of new jobs and bring in millions of dollars in taxes. But while lawmakers are on the hunt for new revenue now more than ever, some have been surprised at the market's paltry anticipated returns.

In late February, the Joint Fiscal Office estimated that a 20 percent tax on weed sales envisioned in the House version of S.54 would generate only about $30 million over the next five years, according to a mid-range projection. The Senate version would raise even less; it proposes levying a 16 percent state excise tax on marijuana sales and allowing municipal governments to charge an additional 2 percent local option tax. The House version requires that 30 percent of the excise tax earnings go toward prevention efforts.

"We're not looking at an awful lot of revenue," Rep. Janet Ancel (D-Calais), chair of the House Ways and Means Committee, said at a February meeting.

But some weed advocates believe Vermont could take in far more money than state analysts projected — particularly if lawmakers agree to make several key changes to the bill.

Last week, the Marijuana Policy Project released a 37-page report that said the Green Mountain State has a chance to receive a whopping $175 million in tax revenue over a five-year period. That estimate is nearly six times greater than the Joint Fiscal Office's projection, largely because it relies on vastly different assumptions.

For its analysis, the Joint Fiscal Office assumed Vermonters who regularly use marijuana would consume between five and six ounces per year — an estimate based on usage rates in Colorado and Washington. The Marijuana Policy Project report says recent data suggests Vermont's actual consumption rate could be twice as high.

And, whereas the Joint Fiscal Office report is based on the bill's actual language, the advocacy group's assumes several proposed policy changes that it says would help Vermont capture demand from out-of-state consumers. Among them: prioritizing licenses for existing hemp and medical marijuana growers, and moving up the market's debut from 2022 to 2021.

"To capitalize on the cannabis tax revenue projected in this report, Vermont must move faster than its neighbors," the report reads. The state is already behind: Massachusetts and Maine now permit retail cannabis sales.

Graham Campbell, a senior fiscal analyst who wrote the Joint Fiscal Office's opinion, said the advocacy group's report appears to use data from academic studies to project the number of users and their consumption rates. His projections, on the other hand, rely heavily on the actual financial experience in other states.

"In general, those revenue estimates are quite a bit lower than what is in this report," Campbell said. But, noting the challenge of projecting outcomes in a relatively young industry such as cannabis, where new information is coming out every year, he added, "That doesn't necessarily mean that they are wrong."

He called the report "useful" and said he may draw some lessons from it if he is asked for a new report later this year, though he would probably continue to rely on his own methodology.

Johnson had not seen the new report but said she would stick with projections from state analysts. "The Marijuana Policy Project is a little bit biased," she said.

The advocacy group is hoping to gain more traction with the conference committee. But even if lawmakers support its recommendations, nailing down the details of such substantial changes to the bill — on top of the other existing differences — would require some legwork.

Time isn't on their side. This month's budget session begins August 25, and though lawmakers have until the end of September to finalize the spending plan, no one knows how long the session will last.

Sears said the committee is currently far from an agreement, but he was confident they could work through the issues. "The important thing would be sitting down together," he said."I can't get there if they won't hold the meeting."

Johnson would not say whether she thought the bill had a good chance of passing this year, noting that the House and Senate are "so far apart."

"I'll be looking to see if they can resolve our differences," she said. If the final proposal doesn't satisfy the House, she continued, "then we'll have to say, 'No, thank you,'" and try again next session.

Such comments, coupled with the committee's delay and her long-standing reluctance, will only fuel questions about whether Johnson has purposefully slowed down the process. She wasn't worried about that perspective.

"The fact that it's gone through pretty much every committee in the House, and I've appointed members of the conference committee, are all signs that I have not used my singular power to stand in the way," she said.

Her counterpart in the Senate agreed with that assessment.

"When the speaker and I talked, we both said it could get done," Ashe said. "History will judge whether it does."

The original print version of this article was headlined "Pot's Shot? | Lawmakers hope to take up retail weed bill before session's close"