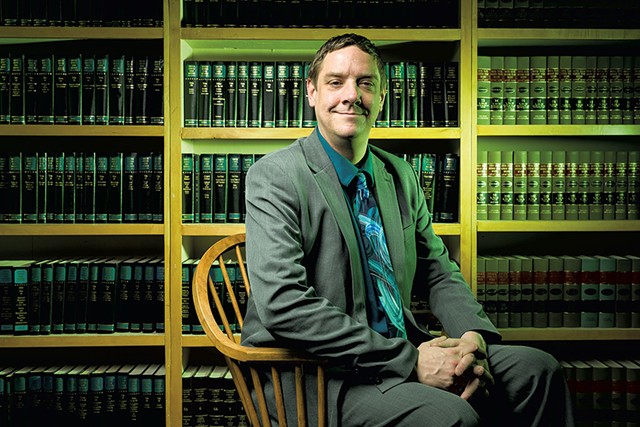 Burlington attorney Tim Fair has two prospective clients who anticipate legal battles when they start new businesses after recreational marijuana becomes legal in Vermont on July 1. One wants to deliver T-shirts to local customers for $100 — with some cannabis thrown in as a free gift. The other wants to offer massages, with a gift of weed on the side.

Would these so-called gray-market businesses comply with Vermont's new marijuana law, which allows for growing and possessing small amounts of weed — but not selling it?

"It's the type of question I get all the time," Fair said. "'Am I going to get arrested? Am I going to get charged? Is that legal?'" For the record, he thinks the above clients will be on the right side of the law.

Fair, 41, is the first attorney in Vermont to launch a cannabis-focused practice, planning to carve out a specialty before the marijuana economy goes mainstream. In January 2017, Fair opened Vermont Cannabis Solutions, offering a gamut of consulting and legal services to businesses, as well as to people charged with weed-related crimes.

Fair, a longtime drug-reform advocate, has been practicing for only five years and isn't exactly a big name in the Vermont legal community. He is an associate in a small law firm, Blodgett, Watts & Volk, based in a house on Hungerford Terrace. Vermont Cannabis Solutions is considered a practice within the firm.

But Fair thinks he has a big advantage in his new venture: He got there first.

"I have no doubt in my mind that this is going to be a great niche," Fair said in a recent interview in his office. "There are a lot of law firms in wait-and-see mode. I think everybody else is going to be playing catch-up. I'm not totally altruistic. This is something I'm passionate about and know a lot about and nobody else was doing. But the money to be made was a big enticement."

In the past two months, Fair said, he reached a tipping point: He is devoting more time to cannabis-related work than to his once-customary family and criminal law cases. Before long, he hopes to be entirely immersed in the field. He expects the pace to pick up once legalization takes effect and to explode if lawmakers eventually approve a full tax-and-regulate system.

A murky legal landscape presents numerous challenges for cannabis businesses — and opportunities for attorneys. The federal government still considers marijuana illegal, which makes it difficult for cannabis businesses to access banking, insurance and an array of services. Furthermore, states that have legalized pot have a patchwork of different laws, complicating interstate commerce. And in Vermont, many of the rules that will govern cannabis will not be laid out in the new law, which has few specifics; state regulators, instead, will work them out.

Fair said the questions from Vermont cannabis businesses are seemingly endless. What kind of THC-extraction equipment will be deemed safe? What about cannabis-centered biking or hiking tours? Will growers have to apply for state permits, just as hemp growers currently do? Will existing medical marijuana dispensaries have an advantage in winning regulators' approval to set up recreational shops one day?

Fair has clients who produce hemp and products infused with cannabidiol, or CBD, a cannabis compound that many believe has medical benefits but that does not produce a high. Those clients are already facing numerous challenges, even though their products are, according to state law, legal.

The biggest problem, Fair said, is finding willing partners: insurance carriers to write policies, property owners to lease space and, most problematic, banks to open accounts and take deposits. Managing finances can be difficult for cannabis businesses; Fair says he has a client currently fighting PayPal, which froze several thousand dollars of the client's money.

Scott Sparks has dealt with all three problems, and then some, while getting his CBD and hemp product store, Vermont Hempicurean, off the ground.

"Anything you try to do when you try to open a business like this, you get a lot of doors slammed in your face," Sparks said.

After endless phone calls and help from Fair, he eventually found a landlord willing to lease him space in downtown Brattleboro, an insurance carrier and a payroll processer. The Vermont State Employees Credit Union agreed to open an account for his business.

But as of last week, Sparks still had not secured a credit card vendor. The credit card companies either refused to work with him or wanted to charge huge fees to mitigate what they insist was the heightened risk of working with Sparks.

When he first planned his store, Sparks said, he reached out to two attorneys he knew. But neither had the specialized knowledge he sought.

"I wanted someone that I didn't have to explain all the details to, who already knew at least as much — and with Tim, a lot more — than I know," he said. "The other lawyers, [cannabis] was one other thing they did."

Fair has a formidable presence. He is six foot five, talks constantly and admits he guzzles too much Red Bull. On a recent workday, he wore a classic gray suit jacket with a loud, bright blue dress shirt underneath.

"I think everybody else is going to be playing catch-up." Tim Fair tweet this

He said he started his new venture quietly. In 2016, he began seriously researching cannabis law and attending conferences and events such as Vermont Hemp Fest to meet people in the local cannabis scene. He spent hours in the Statehouse during the past year advocating for marijuana legalization.

Fair, a Long Island native, said his parents smoked cannabis when he was a child and spoke candidly to him about its advantages and dangers. During a brief stint attending Nassau Community College of the State University of New York, Fair said he tried to set up a chapter of the National Organization for Reform of Marijuana Laws. As an adult, Fair said, he has been a casual user.

Fair's path has been nontraditional, even long before he pivoted his career to weed. As detailed in a 2016 VTDigger.org story, Fair is a former drug addict who faced a felony drug charge after he was arrested in South Burlington in 2004 for possessing 42 grams of cocaine. He pleaded guilty to misdemeanor charges, served six weeks in prison and set about rebuilding his life.

He worked for four years as a skydiving instructor before he studied law. He graduated from Vermont Law School in 2012.

Fair said he doesn't hide from his past, nor does he emphasize it with clients. But he believes his brushes with the law help him better relate to clients.

That connection could help him stand out in what may become a crowded field of cannabis law practices in Vermont. After Washington State legalized marijuana in 2012, CityLab, a website run by the Atlantic, dubbed cannabis lawyer "Seattle's hottest new job." In Colorado, cannabis firms have leapt up the state's annual list of largest law firms.

But there may be a good reason why bigger firms in Vermont haven't fully embraced the nascent industry.

Lawyers have an obligation not to assist clients in breaking the law, noted Montpelier attorney Dan Richardson, a former president of the Vermont Bar Association. With federal law unchanged, larger firms and more experienced attorneys believe that the risks outweigh the rewards, Richardson said.

"That's why you don't see a lot of lawyers saying, 'Hey, let's advise people on cannabis,'" Richardson said. "Lawyers are risk averse, and people are being cautious because I don't think the fight is over. I don't think it's clear that ... this is the beginning of a change."

Fair is undaunted. He sees legalization in Vermont as "inevitable."

There have even been signs of a shift on the federal level. In April, former Republican House speaker John Boehner joined the board of a cannabis company, and Senate Majority Leader Mitch McConnell (R-Ky.) introduced a bill to legalize hemp.

But for now, uncertainty is good for Fair's business. He recently worked with a company that wants to sell marijuana grinders, which are used to turn buds into a smokable product. The owner asked Fair to evaluate all 50 states to determine in which ones the company could safely sell.

"There is no 'yes' or 'no,'" Fair said. "There are levels of risk. It's one of the biggest things people have to wrap their minds around. There is no bright line."