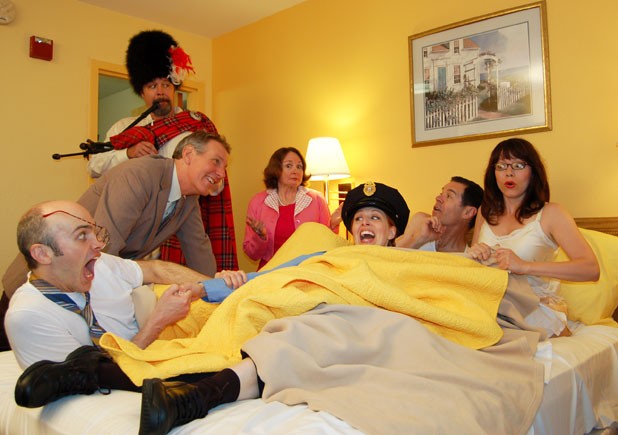 Of all the theater genres being produced today, perhaps none sets clearer audience expectations than farce. To buy a ticket to a farce is to accept an invitation to be amused — simply amused — by a comic situation that escalates zanily toward a riotous resolution, propelled purely by folly. If you attend a farce expecting, say, deep character development or evocations of important themes, then the joke’s on you.

The show now running at Saint Michael’s Playhouse broadcasts its intentions even more clearly by putting the word “farce” in the title. The other word in the title is “unnecessary,” making Unnecessary Farce a vehement promise of something unfailingly, unflinchingly light. Under the direction of University of Vermont theater professor Gregory A. Ramos, this production makes good on that promise — from its opening image of police officer Eric Sheridan (Turner Crumbley) in a pair of Superman underpants, to its clever last line, which punctuates the title with a chuckle-inducing exclamation point.

Part of what makes Unnecessary Farce so funny is its boundless irreverence for its essentially serious central scenario. Dramatist Paul Slade Smith could have been drawing on the headlines of his Chicago stomping grounds when he crafted the story in 2006. But its theme is now all too familiar to Vermont audiences, as well: the embezzlement of municipal funds by an elected official.

As the play begins, we meet two cops, Sheridan and partner Billie Dwyer (Amanda Ryan Paige), in a motel room on the morning they plan to videotape, via hidden camera, the mayor of their unidentified burg, Mayor Meekly (Bill Carmichael), confessing his financial malfeasance to municipal accountant Karen Brown (Abby Lee) in the adjoining room. Brown is a plant working in cahoots with the cops.

This setup offers an inventive variation on the bedroom farce formula — the beds being motel beds — that retains all the room hopping, door slamming and lusty sexual energy that define the genre. Scenic designer John Devlin’s set may be the only touch of realism in the production. The audience peers into two more or less identical motel rooms with standard-issue beds and not much else. Each room contains four doors — opening to the hallway, closet, bathroom and an adjoining room. As Playhouse production designs go — and compared with recent Ramos-directed UVM shows — it’s fairly spare. But the stage brims with kinetic energy as the players are swept up in a maelstrom of comic misdeeds, mishaps and misunderstandings.

Addressing the pivotal misdeed — holding the mayor to account for a missing $16 million — constitutes the plot of Unnecessary Farce. Mishaps and misunderstandings complicate the case. Such as when the mayor enters the motel room multiple times over the course of the sting and thinks he’s discovering other characters mid-sexual-romp — in varied configurations. One hookup appears to involve the mayor’s security chief, Agent Frank (Craig Wells), and Officer Sheridan.

Scenes involving Brown, the straitlaced bean counter, bring the bawdiest humor to the show. She and Sheridan steal moments to bring their tête-à-tête to a romantic boil throughout the play, building dramatic and sexual tension. But when the sting is back on, and she attempts to convey a message to the cops on the other side of the wall by referring to her room’s temperature, Agent Frank thinks she’s getting hot for him.

Another funny subplot hits a darker note with the appearance of an assassin named Todd (Christian Kohn), an operative of the obscure Scottish mafia. His efforts to quash the police crackdown are confounded by his elaborate preassassination ritual, which entails playing bagpipes. It doesn’t help that Todd’s brogue thickens to incomprehensibility when he’s mad. Kohn may have mastered this rare dialect; because it’s unintelligible, it’s impossible to say for sure. Without question, though, Kohn’s thundering thug cuts through this froth like a shark in a kilt.

While the plot descends deliriously into chaos from scene to scene, Ramos’ cast turn in performances of laudable control. Each player acts in alignment with her or his particular comic spine, and thus each succeeds in standing out.

Each also finds a signature way of earning laughs. Lee’s accountant would like nothing more than to show the mayor the books and be done with it, but events conspire to make her clothes keep flying off. Paige is another standout in the role of rookie cop Dwyer. Her hyper-eagerness to prove her mettle, despite deficiencies in basic police skills, translates into a funny, frenetic turn. The balance of the cast bears this light load with aplomb; each player embraces the essential absurdity of the play by steering clear of subtlety in gesture, action or expression.

Such an unfettered play risks becoming ridiculous, and toward the middle of the second act, events grow comically entangled to a slightly tedious extreme. The actors never flag, though, and manage to pull the threads of this yarn together. What’s more, going way, way over the top may have been Smith’s authorial goal. Unnecessary Farce plays as an ironic riff on the conventions of both the bedroom farce and the police stakeout drama.

In its seeming self-reflexivity, the work brings to mind last Playhouse season’s stupendous production of the musical comedy about a musical comedy, The Drowsy Chaperone. In both plays, confectionery genres become their own primary subjects. They’re on proud display as curious cultural artifacts, pulling no punches in their absurdist assault of cornball dialogue, slapstick comedy and cartoonish characterizations. If any deep question percolates during the spectacle, it’s probably about why we delight in such utter silliness.

In any event, thinking is totally optional while enjoying Unnecessary Farce. Laughter, however, is likely to occur involuntarily.