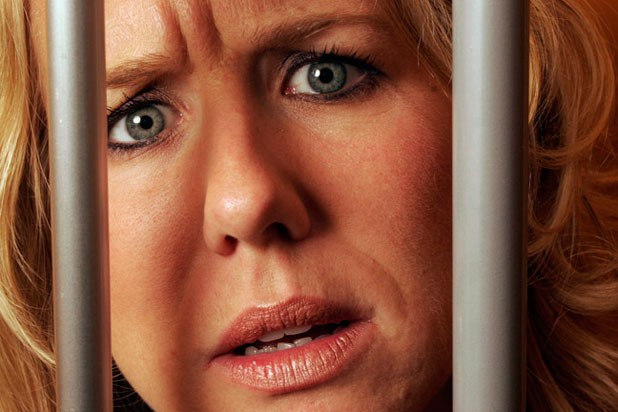 For attractive women, Lauren Weedman declares, the world is “just one big date-rape parade.” The R-word is no laughing matter, of course — unless you’re watching the former “Daily Show” correspondent’s hilarious web video on sexual harassment in her Our Bodies, Myself series (which you should do right now at FunnyorDie.com/lauren_weedman). In it, Weedman “goes undercover as a beautiful woman” for a whole New York City block, tarted up with an exposed black bra, micro-skirt, stilettos and excessive makeup. Her shoulder-length blond hair is fluffed into a come-hither style. Oh, and of course someone with a video camera is recording her every move.

Weedman predicts to the camera that in this single block she’ll be harassed upward of 50 times. Somehow, the sole honk from a passing truck verifies her thesis. She demonstrates “fighting back,” angrily striding down the sidewalk and mouthing comebacks to imaginary men. Finally, someone yells, “Whore!” and Weedman’s don’t-mess-with-me face dissolves into a broad, grateful smile. “Oh, thank you very much,” she says. The screen goes to black as she leans in eagerly, saying, “Thank you! What is your name?”

In one fell swoop, Weedman sends up the screwy rules of the (hetero)sexuality game and the insecurities common to women in general about their looks. That’s the “message” part. The clip also demonstrates two essential elements of her performance identity: Lauren Weedman is fearless, and she really, really needs to be loved. This works because it is real.

Then again, what wickedly wacky person does this not describe?

Weedman, who just turned 40, arrives in Vermont next week for a five-town tour of her solo show, Bust. (That title doesn’t mean what you’re thinking; it’s based on Weedman’s experiences volunteering in a women’s prison.) In a phone conversation from her home in Los Angeles, she’s just as winsomely needy and eager to please as she is in her theatrical persona. And just as funny.

Weedman theorizes that she learned to be entertaining because she was adopted. There was this foster kid she knew when she was little, she explains; he was troublesome, so he “got sent back.” Not understanding the difference between adoption and foster care, she figured she’d better keep her family amused. Back home in Indiana, where her parents still live, Weedman did just that. Years later, when her adopted mom met her birth mother, “She said, ‘Thank you — we’ve had so much fun with her,’” Weedman recalls.

Over the years, Weedman turned her natural talent into a career that includes solo “autobiographical performances” in the vein of Spalding Gray; television gigs on “The Daily Show With Jon Stewart” and other Comedy Central shows; National Public Radio’s satire show “Rewind”; a guest spot on Showtime’s “United States of Tara”; and a 2007 book of autobiographical stories, A Woman Trapped in a Woman’s Body. The book — subtitled Tales From a Life of Cringe — begins with Weedman getting hired by “The Daily Show,” and then getting fired. “I wasn’t ready for it,” she surmises of the highly charged world of TV. “I was a theater person.” But she also reveals some sexism: “Someone on the set told me I wasn’t pretty enough,” Weedman confides.

Dan Savage doesn’t agree with that assessment. The author of Savage Love and sex columnist for Seattle’s alt-weekly The Stranger declares in a blurb on Weedman’s book, “Funny is the new beauty and so we must worship funny. Oh, and Weedman is beautiful too. It’s just so freaking unfair.”

Weedman has earned more conventional accolades as well. In Seattle, where she lived and began performing in the early 1990s, the Weekly called her “dazzlingly brilliant.” The New York Times said of her show Homecoming, “Like Bob Newhart in his early stand-up routines, she is particularly good at making her points.” That one-woman piece was published in Women Playwrights: The Best Plays of 2002. Weedman’s current shows, Bust and No … You Shut Up, are garnering rave reviews around the country.

In Bust, Weedman plays more than 15 different characters, including, of course, herself. “Weedman is a sharp chronicler of the [jail’s] larger social context,” opined the Los Angeles Times. “She doesn’t let [the inmates] off easy, but she also subtly takes note that many of their worst behaviors have been socialized into them.”

Despite its serious-sounding theme, Bust is also funny. “My voice is comedic, but I’m not mocking people,” Weedman points out. “I volunteered in that jail … and I felt a heavy burden to tell their stories. But when I get on my feet, I express myself with comedy.” And by sharing her own “life of cringe.”

Weedman’s Vermont tour is produced by filmmaker and arts entrepreneur Jay Craven, under the auspices of his own Kingdom County Productions and in partnership with Burlington City Arts and Lyndon State College. Weedman first met Craven, she explains, when she performed last year at Marlboro College, where he teaches film and video. “It was incredibly rare that someone would offer to produce a tour,” Weedman says. “But Jay did — it was awesome!”

In a 2007 cover story, an L.A. Weekly writer says of Lauren Weedman: “She’s not a big star. She may be someday, or she may not…” Reflecting on that, Weedman tells this reporter, “I don’t think of fame. For a while there I thought my shows would get more exposure, but I’m still under the radar — and I’m feeling like that’s a pretty good place to be.”

Even so, she really, really hopes you like her.