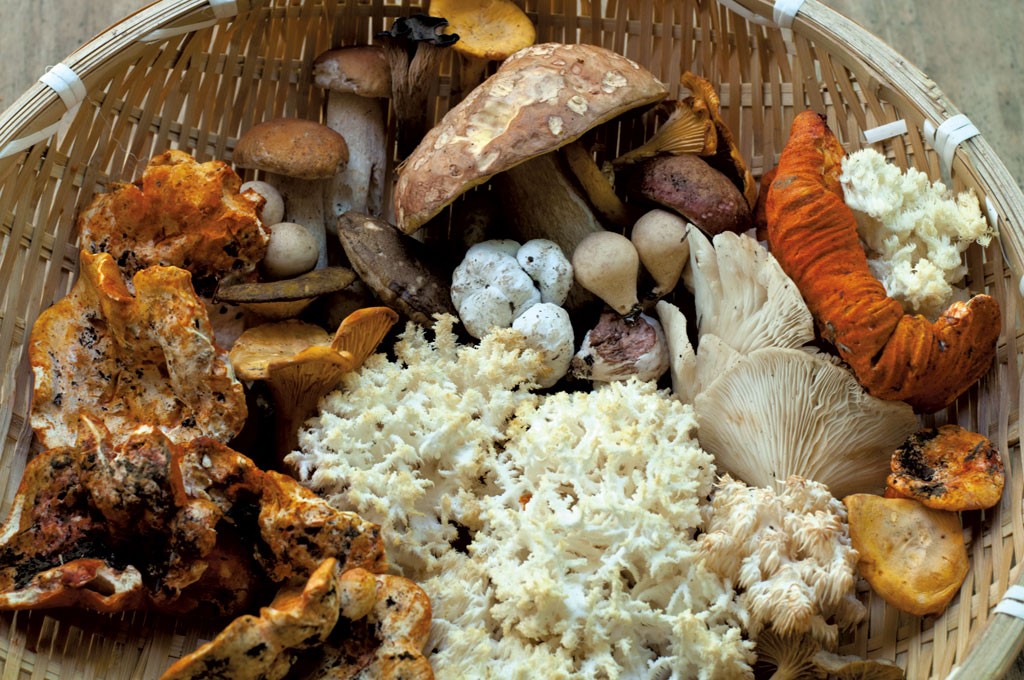 In a mossy vale not far from Montpelier, Dave Kaczynski holds a small yellow mushroom. "These never came to bear here this year," he says. It hasn't rained in days; the forest floor is dry, and the mushroom has started to wither. Its edges are tattered, its gills and stalk scarred where bugs have bored into them.

It's a chanterelle, one of the choicest wild edibles in the world, but it's too far gone, no longer worthy of the plate, and one of few found here this season. For Kaczynski and other professional foragers and wild crafters — as some call themselves — chanterelles bring $18 a pound at market in Vermont. In more moneyed locales, they can fetch $25 or more.

Kaczynski's company, the Wild Side of Vermont, provides sustainably harvested wild edibles to South Burlington and Montpelier farmers markets, and to area chefs and restaurants. While his prices may seem steep, finding the fungi takes both practice and perseverance — especially as mushrooming becomes increasingly popular in Vermont for amateurs and pros alike.

"Sometimes it still feels like you're giving them away," says Robert Dumas, Kaczynski's friend and a student at the New England Culinary Institute, who's along for the walk in the woods.

"Sometimes you're just paying for miles on your shoes," Kaczynski adds.

The men suspect their spot has been poached. "The chanterelles used to run both sides of this brook right here," Kaczynski says. "But people have been picking this area pretty good."

"I saw people just cutting the tops straight off," Dumas says. One guy in particular, they say, has been picking the place clean, and they know who he is. Conscientious mushroomers, Kaczynski says, will take some but not all of a particular patch. But "if too many people are using your spot," he adds with a shrug, "it's time to find a new spot."

A mushroom trek, like any game of wilderness hide-and-seek, is a fickle forage: Set out in search of one thing, and you'll likely return with another. But for hungry hunters, August and September bring a fungal menagerie: lion's mane, hedgehog, lobster, oyster, chicken and black trumpet mushrooms all flourish across the Green Mountains.

We've walked for about half an hour looking for black trumpet, an elusive charcoal-colored 'shroom in the chanterelle family. As we ascend a hill, Kaczynski announces excitedly that this is one of his best spots. Last year, he says, he picked a boodle of the hard-to-find fungi here, and they should be coming into season right about now.

Black trumpet mycelia — or root networks — commingle in a symbiotic mycorrhizal relationship with beech tree roots. Beeches are everywhere, but today the ground is barren. We find a few of the dusty, vase-shaped fungi, but most are wilted and dry. "Looks like this is amounting to nothing," Kaczynski says. "Such a drag — we had a killer harvest last year. I think it all just dried up midseason."

He looks off down the hill as if wondering which way to turn, then says with a start, "Oh, look over here! See that over there, see it on that tree?"

He points to a fallen log studded with white clumps of ... something. Closer up, they look like fungal cauliflower dripping with creamy-white tines like icy winter waterfalls. It's lion's mane, a "toothed" mushroom in the Hericium genus, probably coralloides or ramosum.

"Yeah, that's wicked," Kaczynski says. "There's a ton of it there. This stuff is fabulous, man. The smell of it will blow you away."

I bury my nose in a bunch and inhale its scent. Lightly fishy, sort of nutty, it mostly smells like wet, loamy dirt, peaty and rich.

"These eat like sweet lump crab meat," Dumas says. "That's probably one of my favorite mushrooms." (Toss some in at the end of a sauté, he tells me later, for a killer sauce or stir-fry.)

"It's so funny how that sort of thing happens," Dumas notes. "You start to be like, 'Man, nothing, damn,' and suddenly there it is."

Moments later, Kaczynski bends over a tuft of leaves. "See this pile? Typical hidden delight here. You see the leaf structure; they're [lying] flat, or a certain way. I see an irregularity and think, OK, there's something going on there." He lifts up the leaves to reveal a massive lobster mushroom, five inches across and deep red, riddled with slugs and worms. "This is huge — and gone by. But that's how we spot them," he says.

These hearty, malodorous, bright-orange beasts of the woods grow when a parasitic fungus infects another fungus, and in this varied stand of forest, they're everywhere, tucked beneath the leaves. "[The parasite] takes a perfectly round, white Russula — a relatively inedible mushroom — and makes it a choice edible," Kaczynski says. The result smells like an earthy shellfish and looks like chopped lobster when cooked.

Kaczynski points to another disturbance: "That's a nice one there."

I pull back the leaves, grab the fungus at the base and twist. It comes out easily, a firm, if slightly grotesque, orange form. "Put that in your basket," he says. "You've got to have something in there for the magnetism to work." Maybe now our luck will turn.

"This feels like it should have trumpets all around it," Dumas says, standing at the base of a beech. "There's some more hedgehogs here, just coming." Hedgehogs, named for their toothy undersides, are a culinary favorite and unmistakable.

Kaczynski strides up the hill, stopping here and there. "There's just something about this particular part of the woods for these lobsters," he says. "We found 400 up here two years ago." Sure enough, we find the earthen "fish" in abundance, many past their prime.

We never find the trumpets. Still, I return home with a basket full of fine fungi: glowing white lion's mane, several lobsters, a few chanterelles, a sole porcini. Even on a slow day, the forest provides plenty for dinner.

Later in the week, I hit the trail with Ari Rockland-Miller, whose mushroom career is on a different track. "I'm really an educator," he says as we wander a path on the sloping shoulder of Camel's Hump. "I don't sell the mushrooms I find."

Rockland-Miller and his wife, Jenna Antonino DiMare, nursed a passion for mushrooming for years before launching their blog, the Mushroom Forager, in 2010. Both lead workshops for beginner foragers.

Lately, Rockland-Miller says, the workshops have been selling out. In the past few weeks he has led dozens of people into the woods — young food nerds, older folks seeking a return to family foraging traditions, longtime nature lovers, wild game hunters — all hoping to identify choice edibles during their walks.

"I want to take people to good spots so it's fun," Rockland-Miller says, "but not so good that I give away all my best spots. Around here, especially closer to Burlington, there is a little pressure on," he continues. "There is enough land for everyone, but a lot of people go to the same spots ... there is a critical mass."

Like Kaczynski and Dumas, Rockland-Miller says he likes to leave behind about half the mushrooms in any particular patch, allowing them to finish their reproductive cycle in hopes that the patch will grow even larger.

We stumble on a crop of abortive Entoloma. The bulbous, white fruit grows alongside the honey mushroom, and its origins are murky. "Even scientists don't totally understand it," Rockland-Miller says, "But, essentially, the Entoloma somehow colonizes the honey mushroom, aborts its growth and turns it into this weird blob." Break them open and they're rosy inside and harbor a mild, earthy odor.

Whether such synergies are fungus on fungus, or between tree and mushroom, they are common on the forest floor. Along with an eye for habitat, awareness of these forms the basis of a hunt. On an overturned log, Rockland-Miller finds oyster mushrooms; in a weeping spring along the trail, yellow-foot chanterelles. Still, he says, "There's no guarantee of finding anything." Earlier in the week, he says he found wide swaths of black trumpets, hedgehogs and chanterelles in Essex, N.Y. "But not every day can be the windfall," he adds, smiling.

Moments later, we spot a huge porcini, firm and beautiful and pristine. Dubbed "king bolete," porcini are prized around the world for their dense umami flavor and pungent aroma. My guide slices into it with his knife. "Usually the maggots get these really fast," he says. "This is one species in particular the flies love as much as we do." You'll want to cook most mushrooms before eating, he adds, but porcini are an exception.

After stripping away the pores beneath the cap, we each take a small bite. The silky flesh is firm, foresty and a little fruity. "They're a little more mild when they're raw," Rockland-Miller says. "When you cook them, they're stronger, nuttier. The taste sort of builds on you."

Porcini, like most gourmet mushrooms, have a symbiotic relationship with the trees; these nest in hemlock roots and exchange nutrients with them. Above us stands a towering, straight softwood that's probably four feet in diameter. "Yup, that's a good one," Rockland-Miller says, chewing the mushroom, then sets off toward the tree, hungry for more.

He finds none — porcini often grow solo, I'm told — but as we exit the wood, we fill our baskets with many more strains, our heads full of dreams that will fruit later, in the kitchen.

The original print version of this article was headlined "Mushroom Men"