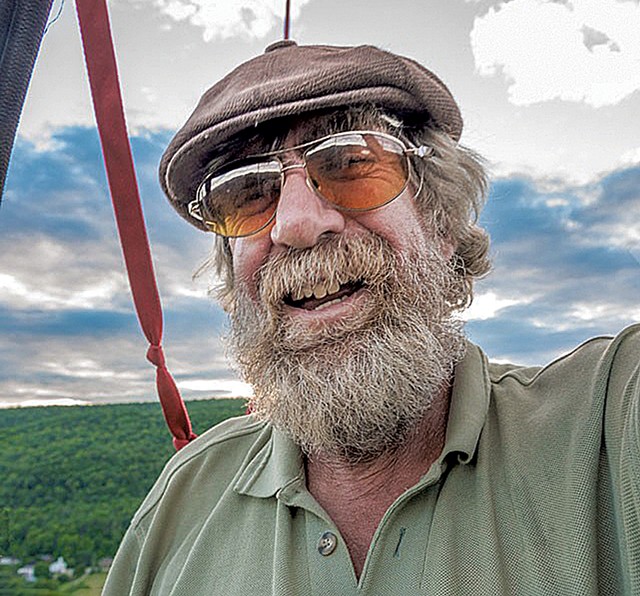 On an old MG convertible parked in Post Mills, a village in Thetford, someone used their finger to scratch out a message in the dust on its hood: "Blue Skies Brian! Fly High." On a red Mazda Miata nearby, similar sentiments are expressed, also imprinted in dust: "Miss You" and "RIP."

The messages are for Brian Boland, who died last summer at 72 in a hot-air ballooning accident. He designed and constructed the building that houses the cars and countless other objects — from beer bottles to typewriters to flags. Roughly 180 feet long, the structure has room for a lot of stuff. Boland filled it, floor to rafter.

In addition to being a renowned hot-air balloonist, he was a designer, maker and collector whose eclectic treasures are on display in his one-of-a-kind museum. The backroads repository has two names, each written on a sign that hangs in the building: Brian's Museum of Rusty Dusty Stuff and the Experimental Balloon & Airship Museum. Both names fit the bill.

Many items in the museum, like the cars, are indeed dusty. Other objects — outboard motors, saw blades and sleds — are rusty. The museum is also filled with things that could fly, did fly or might fly. These include woven balloon baskets, single-engine airplanes and hot-air balloons stuffed into sacks like giant sleeping bags. 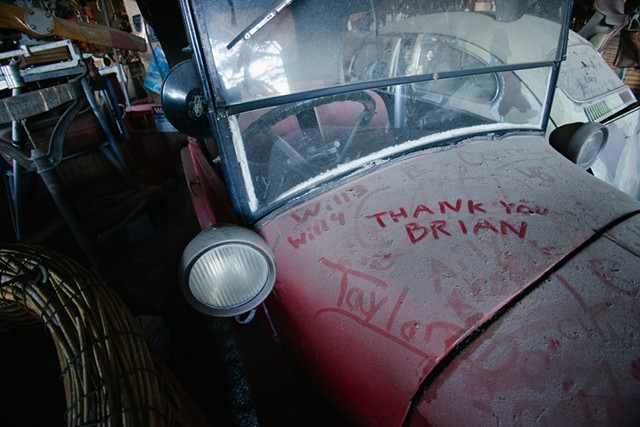 Crammed amid the dust, rust and flying machines are plastic pink flamingos, dentist chairs, soccer balls, scales, frying pans, a urinal and Boland's paintings from his art school days in New York City. A jumble of skis are propped on their ends, standing together like a fistful of extra-large pickup sticks ready to be dropped.

The inventory goes on and on. If you name it, Boland probably collected it — or 27 of it, or maybe 127. To get a sense of the place, imagine what might've been if Shelburne Museum founder Electra Havemeyer Webb had had a secret life behind the wheel of Chitty Chitty Bang Bang, the fictional flying car.

Boland's interests — flying and collecting — sometimes overlapped. According to his partner, Tina Foster, he spotted some of the stuff he accrued from the sky, as he soared in a balloon over the hills and farms of the Upper Valley. When he was back on terra firma, he'd seek out the goods seen from on high. People also gave him items or just dropped stuff off. He found things on the side of the road.

"His aesthetic was definitely rusty and dusty," Foster said. "He liked interesting stuff, unexpected stuff, weird stuff and stuff people had made."

This summer, Foster is opening the museum to visitors by appointment. But people are also welcome to peek into the museum on their own, she said. This is easy to do, thanks to Boland's building design, which incorporates big, open cutouts along one wall — essentially windowless windows.

The museum's setting, both pastoral and unusual, is reason enough to visit. It's located at the Post Mills Airport, a charming two-runway airstrip that Boland purchased in 1988. He flew his hot-air balloons from the site, and ballooning events are still held there. The annual Experimental Balloon Festival took place in mid-May, and on summer weekends gliders manned by pilots take off from the grassy field. Launched by an airplane with an engine, they fly quietly away — sometimes soaring as far as New Hampshire's Mount Washington — before reappearing over the trees to land at the airport.

"It's just a nice, healthy, beautiful place to be," said pilot Pete Dodd of New London, N.H., a member of the Post Mills Soaring Club.

The grassy expanse of the airport is bordered by two structures: the museum and a local attraction called the Vermontasaurus. The creature is, as its name suggests, a dinosaur-shaped sculpture that Boland constructed, with help, from scrap wood.

"He just got this idea in his head that he wanted to build a dinosaur," Foster said. "He didn't like sitting around. He was constantly thinking of new things to make and modifying things."

A small exhibit by the Vermontasaurus' head describes the piece's origin. It includes a sign from late spring 2010, on which Boland announced that he was seeking help, from June 4 to 13, to build a dinosaur. By the next month, the 120-foot-long creation was in place at the airport. A note dated July 7, 2010, written by Boland in black marker, advises visitors: "Please, Feel free to stand back and feast on the 'Vermontasaurus.' Just do not go under it or we'll have to tear it down, I'll be fined or I'll go to prison ... or who knows what the authorities will do. Thank you very much. Have a great day! Brian J. Boland."

The Vermontasaurus will certainly catch a visitor's eye. But the overarching theme at Boland's museum is ballooning. Boland even used a balloon for construction, employing one to lift a gazebo into place on the roof.

Photographs of balloons hang on the second floor of the museum. Sewing machines, including the one Boland used to make his first balloon 50 years ago, are displayed on windowsills. (These windows have glass and rise three stories high.) Articles that Boland and others wrote to describe his balloon projects and inventions are posted here and there.

One piece, titled "No Chase Required!," describes Boland's effort to build a balloon basket that he could drive back home after a ride. The contraption meant that Boland wouldn't need a chase vehicle to transport him and his gear home. He also wouldn't need to hitchhike or take a long walk. The vehicle, called a cloud car, is in a secondary building at the museum, a long shedlike structure housing a stable of Boland-constructed three-wheeled vehicles.

"[I]t has been a quest of mine to design and build a self-contained flying balloon/retrieve vehicle," Boland wrote in article that's displayed with the vehicle. "The problem with this is that no sooner is one creation designed and built than new ideas pop into one's head for improvements or a completely different approach, warranting the creation of another vehicle." 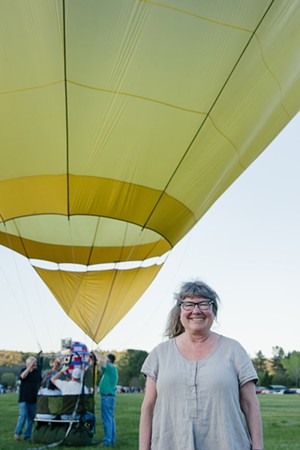 In his will, Boland deeded his property to Foster, a physician at Dartmouth Hitchcock Medical Center and Clinics, and to the Town of Thetford, according to both parties. In the coming months, the Thetford Selectboard will decide whether and how it wants to take ownership of the airport, said Brian Monaghan, a lawyer who represents the town.

Town manager Bryan Gazda recently visited the site. "I'm not a balloonist," Gazda said, "but it's a very unique and interesting museum."

Foster intends to establish a nonprofit, tentatively called the Brian J. Boland Memorial Foundation, at the 50-acre property. She envisions a community gathering place for arts and crafts, ballooning events and education, movie screenings, and ecology projects. She'd like to plant a pollinator meadow between the two runways.

Dust is probably the most fitting medium in which to write a message to Boland. But a more formal homage can be found at the museum, where a table holds notebooks and pens for visitors who want to pay tribute.

"We miss you, Brian," one note reads. "The morning sky is so quiet in Post Mills."

For more information on Brian's Museum of Rusty Dusty Stuff, aka the Experimental Balloon & Airship Museum, email balloons@vermontel.net or call 333-9254.

The original print version of this article was headlined "'Fly High'"