Should Vermont’s Only Landfill Get Bigger? 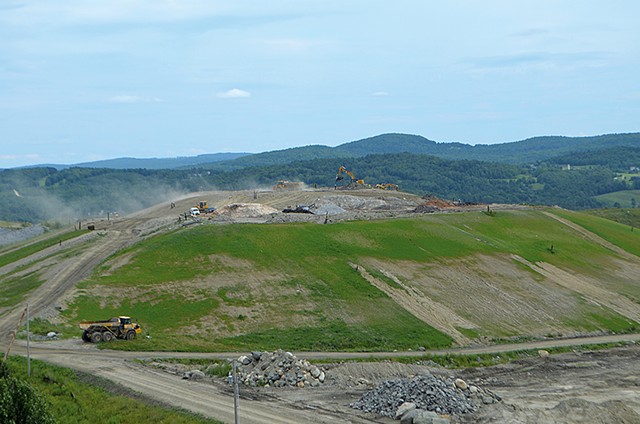 From a distance, the mounds of land east of Route 5 in Coventry resemble one more set of rolling hills in Vermont's mountainous Northeast Kingdom. But locals know that this topography is man-made. "That was flat land at one time," Chris Jacobs said as he gazed at Vermont's only operating landfill last week. "Now it's a mountain of trash."

The white-bearded Northeast Kingdom resident isn't happy about it, but the massive dump near the Canadian border could soon grow bigger — if state regulators approve it, that is.

The landfill's owner, Casella Waste Systems, has proposed a 51-acre expansion that would allow it to stay open for another 22 years — and take in an additional 11 million tons of trash. The company has applied for a new solid waste certificate from the state Agency of Natural Resources. That permit is necessary before a broader review can be completed under Act 250, the state's land use law.

In the meantime, debate is ramping up. Last month, a dozen Northeast Kingdom opponents of the expansion, including Jacobs, founded DUMP — an acronym for Don't Undermine Memphremagog's Purity — a reference to the scenic lake just across the road from the landfill. And a powerful coalition of advocacy groups, including the Conservation Law Foundation and the Vermont Public Interest Research Group, submitted a joint letter on July 20 urging ANR to reject the expansion.

Critics fear that polluted water will leak from the landfill into groundwater and Lake Memphremagog, which straddles the U.S.-Canadian border and supplies drinking water to thousands of people in Québec. The southern tip of the lake is within 1,000 feet of the landfill property. Earlier this summer, Québec politicians jumped into the fray to voice concern, which heartened Vermont critics.

Without a new permit, the landfill will probably run out of space and be forced to close in four years. Vermont's haulers would have to truck waste to other states — and would likely pass on higher fuel costs to customers.

The situation is partly of Vermont's own making. State officials successfully pushed to close the hundreds of small, oozing, unlined town dumps across Vermont in the 1980s and 1990s. The second part of a state plan, articulated under Act 78, was to encourage the creation of regional landfills with proper environmental controls. That program flopped.

A network of transfer stations was created for trash, recycling and, eventually, composting. But the materials are ultimately trucked elsewhere, with most of the trash going to Coventry. High costs and loud public opposition killed various proposals for new landfills, including one in Williston. Environmental groups increasingly agree that adding trash capacity thwarts efforts to become a "zero waste" society.

So Vermont wound up with one big landfill.

"They say nobody else wants to have a dump," Jacobs harrumphed. "Well, we don't want a dump in our backyard, either."

The Albany resident is not the only one who resents that the Northeast Kingdom has become the state's trash can. "It's just out of sight, out of mind," Rep. Vicki Strong (R-Albany), said about the region. "A lot of times, we don't get a voice in something until it's done." 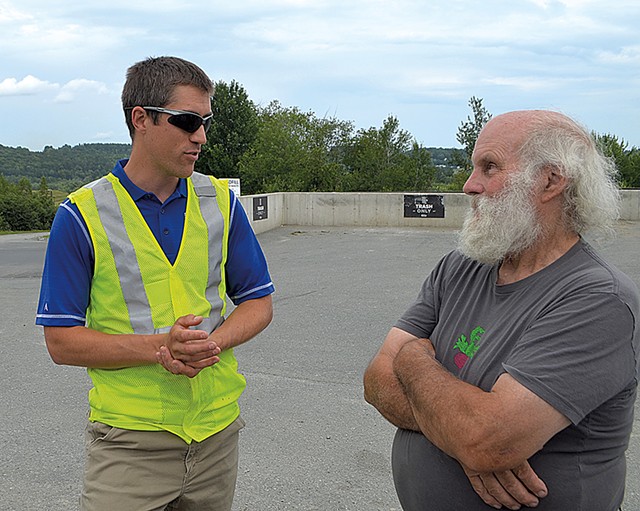 DUMP wants more stringent weight limits on trucks traveling to and from the landfill, better odor control and a pause on any expansion.

Supporters of a bigger landfill say it's the best solution for Vermont's rubbish problem. Officials at Casella, the Rutland-based company that started with one garbage truck in 1975 and now brings in annual revenues of $600 million, point out that trash has to go somewhere.

"Everyone wants you to pick it up on Tuesday morning or Wednesday morning, but nobody wants you to put it down anywhere," observed Jeremy Labbe, general manager of the Coventry landfill, during an interview on the grounds.

As he spoke, trucks full of trash, construction debris and contaminated soil pulled into the entrance of the 627-acre property. The semis groaned as they labored up the site's winding roads to empty their loads onto what some locals have dubbed Mount Casella.

Last year, Casella accepted 600,000 tons of waste in Coventry. Roughly 70 percent of it was from Vermont. The landfill does not accept municipal waste from outside the state, but it does take construction and demolition debris, contaminated soil, and wastewater treatment sludge. Casella charges higher disposal fees for out-of-state trash.

Each day's deposits are covered with dirt, sometimes the same contaminated soil that trucks pay to unload. All but a closed 11-acre section of the landfill that predates Casella's ownership is lined with heavy layers of plastic. Grass covers large, filled-up sections of the Mount Casella range — composed of at least five mini-mountains.

But whatever the cover, snow, rain and waste decomposition generate large amounts of liquid known as leachate, or, as some refer to it, garbage coffee — liquid that has seeped through trash and picked up harmful chemicals on the way.

Casella collects the leachate with wells and pipes built into the sprawling mounds and trucks it to sewage treatment plants, including one in Newport. The company estimates that the expansion could generate an additional 7 million gallons a year.

That increases the risk of problems, including leaks into groundwater from plastic liners that invariably deteriorate, according to opponents. They say Casella has already failed to address the presence of arsenic and other substances in leachate near the old, unlined sections of the landfill.

They worry about additional leachate containing a host of potentially harmful toxins from items allowed at the dump: flame-retardants in cellphones and computers, non-friable asbestos, and nonstick pans. They further point out that banned items can wind up in the dump anyway, including lead-based batteries and light bulbs containing mercury.

Tests have not detected any contaminants beyond the landfill property line, according to Jeff Bourdeau, waste management specialist at ANR. "At this point, we've no evidence of any pollution off-site," he said.

Casella officials echo that. "Leachate from the landfill is not going to make it into the lake," vice president Joe Fusco said. "There are redundant liner systems — test wells that would catch any kind of leak, so to speak, from the landfill well in advance of any kind of environmental damage." 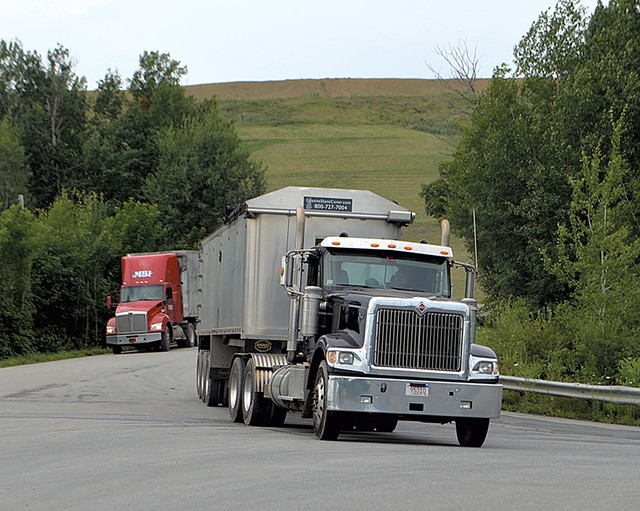 In the July 20 letter to ANR, CLF and five other environmental groups contend that Casella has not sufficiently addressed concerns about leachate. The groups say Vermont should pursue aggressive recycling and composting programs, not a landfill expansion.

The groups also suggest that the payments Casella makes to the host community, Coventry — $779,000 last year — will ultimately not cover the legacy of pollution.

The Northeast is facing a landfill capacity shortage, and the state should "ensure that Coventry does not become a dumping ground for the rest of New England," the letter reads.

It's from Kirstie L. Pecci, director of the Zero Waste Project at CLF, and was signed by the Vermont Natural Resources Council, VPIRG, the Toxics Action Center, Clean Water Action and Vermont Conservation Voters. The Coventry proposal is "so clearly dangerous and so clearly an antiquated and irresponsible idea" that it was "easy to wrangle a coalition together in short order," Pecci said.

Despite precautions, dumps pollute, and even sewage plants often can't properly treat landfill leachate, so the Coventry proposal would be a step backward, Pecci said. She noted that Casella has lost several recent landfill expansion battles, including one in Southbridge, Mass., and another in Bethlehem, N.H.

The hubbub over the Vermont expansion has landed Coventry, population 1,048, back in state headlines. It's probably the biggest story there since Phish played in a field next to the local airport in 2004, attracting 65,000 fans.

The small town outside Newport has few businesses, and the village center looked tired last week. The burned husk of a vacant house occupied one lot, and the windows were boarded up at the graceful old church on the green. In a community where household income is 35 percent lower than the state average, even a landfill has fans. Coventry has no zoning, so the expansion does not require local approval. But town leaders are supportive.

"I believe they've been a very good neighbor not just to Coventry but to the whole area," said Rep. Michael Marcotte (R-Coventry), who is chair of the Coventry Selectboard. "They employ a significant number of people there at good wages."

The landfill is a much more sophisticated operation than it was back in the 1980s, Marcotte recalled. Back then, a Coventry businessman named Charlie Nadeau owned the relatively small dump and ran stock-car races nearby. Québec investors purchased the landfill, then sold it to Casella in the mid-'90s.

While the members of DUMP want landfills to be opened elsewhere in Vermont to take the pressure off Coventry, environmentalists such as the CLF's Pecci say that's a bad idea. Even Casella VP Fusco says Vermont doesn't need a new landfill.

"The facility in Coventry is a crucial and important part of Vermont's waste management infrastructure," Fusco said, "and it has the capacity to serve the state of Vermont for at least a few more decades."

Sen. John Rodgers (D-Essex/Orleans) has deep concerns about the expansion, citing worries about the lake. "I don't think any of us are excited about the potential for that landfill growing," said Rodgers, who is running as a write-in candidate for governor.

Gov. Phil Scott deferred comment to his chief of staff, Jason Gibbs, who said his boss did not want to prejudge the state review and would not take a stand now.

ANR is expected to take months to consider public input, so the landfill's future won't be decided quickly. And if the agency says yes to the expansion, the District 7 Environmental Commission in St. Johnsbury would still need to finish its Act 250 review, which could have more potential hurdles.

Meanwhile, last Thursday ANR ordered Casella to collect additional groundwater monitoring data at six test wells near the landfill. Cathy Jamieson, ANR solid waste program manager, said the order was in response to public comments that state groundwater protections are not being met at the landfill now. The results likely won't be in before mid-September.

The original print version of this article was headlined "Last Trash Can Standing: Should Vermont’s Huge Landfill Get Bigger?"