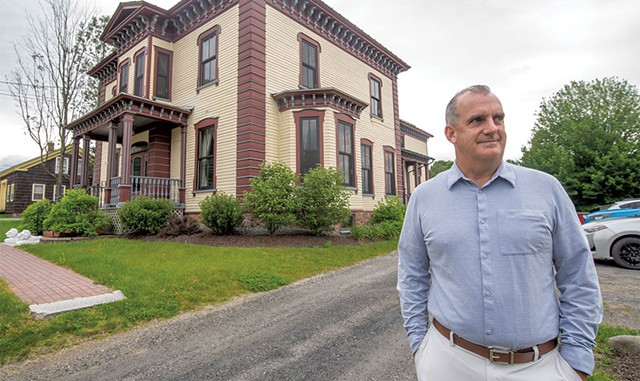 When Staige Davis started out in the real estate business in 1980, the typical contract filled just one legal-size page, nobody talked about radon and there was no such thing as a home inspection.

"You had your uncle Charlie come look at the house, and that was it," said Davis, who is now executive chairman of Four Seasons Sotheby's International Realty in South Burlington.

Things have gotten more complicated. Once real estate agents used to control the information in the multiple listing service. Now details of every home listed with an agent are available through sites like Zillow and Redfin. Sale contracts are 18 legal-size pages or more — albeit digital — and if you're not an expert at social media, you're missing opportunities to find both sellers and buyers.

When a dozen or more people are bidding on one home — a situation that’s arisen many times lately in Chittenden County’s overheated market — and one bidder is successful, that means at least 11 real estate agents will have done hours of paperwork, only to lose out with no commission.

"It's a tough, tough business," said Mike Hickey, a broker at the Keller Williams Realty office in Stowe.

But despite the difficulties, real estate is a popular job choice in Vermont. The number of licensed real estate agents rose 20 percent between 2018 and 2022, from 1,125 to 1,348. The 40-hour pre-licensing courses offered by the Vermont Association of Realtors regularly sell out and have a waiting list, said Kathy Sweeten, the association CEO.

"COVID kind of changed things, and people saw the opportunity to change careers," Sweeten said. She thinks that's why she's now seeing more interest from younger people, a welcome development in a profession where the average age is 55.

At age 35, Rep. Logan Nicoll (D-Ludlow) is one of those younger people. Nicoll works in maintenance at a hotel but recently obtained a real estate license because he wants the flexibility to carry out his duties in the legislature from January to May.

Nicoll was prompted to try real estate because he noticed a lot of the agents he knows appeared to be nearing retirement age. And in a state where housing supply is low, he said, Ludlow — a ski town with many second homes — is an outlier, with a high rate of turnover.

Nicoll noted that the skills he acquired when he was running for office in 2018 are directly transferable: "Cold calls, trying to strike up a conversation with somebody you have never talked to ... campaigning and knocking on doors is all about selling yourself and selling your ideas," he said.

The Vermont Association of Realtors is working with the state's Office of Professional Regulation to beef up the education requirements for real estate agent licensing.

"We're taking the largest transaction of [someone's] life, potentially, and handing it to people who have 40 hours of education and saying, 'good luck,'" said Hickey, the president of the association's board.

"You're dealing with someone who has never owned a home, who might have lived in an apartment their whole life," Hickey said of rookie real estate agents. "They don't know what the big black tank is in the basement."

For those who figure out the business, though, there's money to be made. According to the National Association of Realtors, brokers and agents with at least 16 years of experience reported an average income of $75,000 last year, down from $86,500 in 2019. Those with two years or fewer reported income of just $8,600. About 65 percent of all real estate agents and brokers are female college graduates who own a home, the association said. 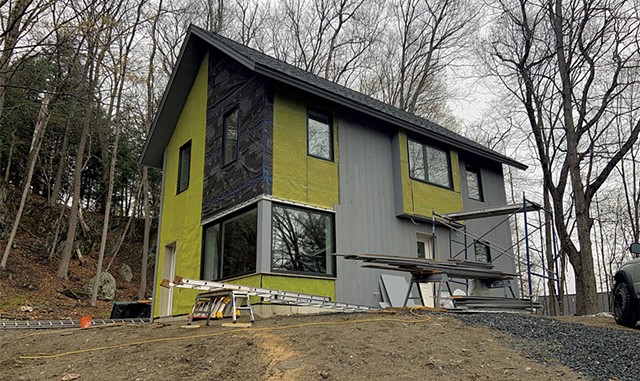 Efficiency Vermont devotes special attention each year to commercial and residential buildings that are exceptional for their design, affordability and energy efficiency. The Winooski nonprofit presents its Best of the Best awards at a Better Buildings by Design conference each spring. These winning projects were all constructed in 2020 or 2021.

Best of the Best

A four-bedroom, 974-square-foot home in Norwich that was built to house an adult and three teenagers. With a 12,000-BTU heat pump and a pellet stove, designer/builder BackTilt Studio estimates the home's annual energy costs at $1,694. 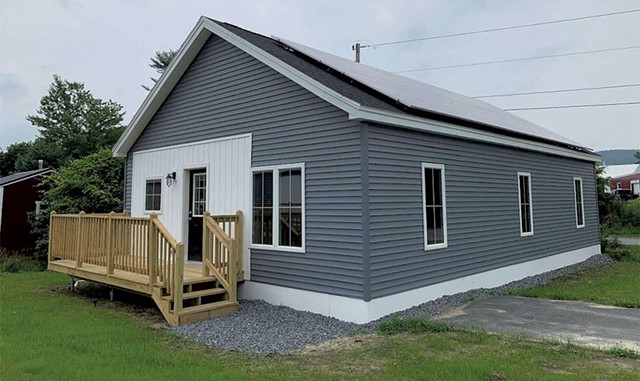 Three 840-square-foot modular homes built by KBS Builders for a nonprofit mobile home park in downtown Bristol. John Graham Housing & Services custom-designed each two-bedroom home for its lot, and two of the homes were built to ADA guidelines. Estimated annual energy cost for each: $18. 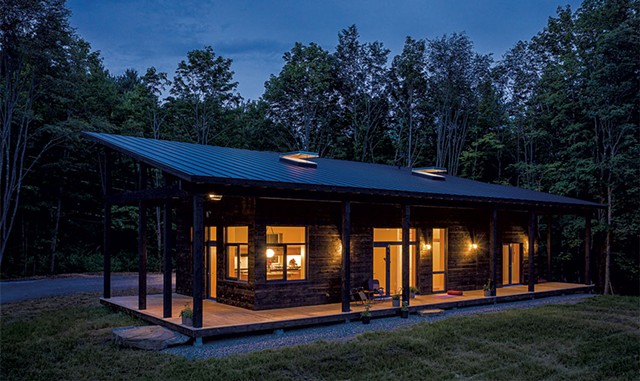 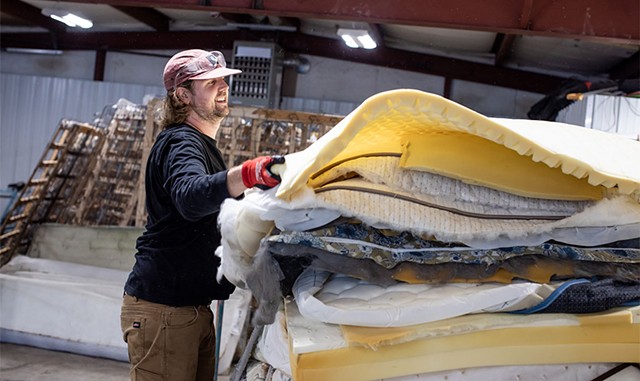 The foam goes to a place in New Jersey that turns it into carpet pads; the wood to Burlington Electric Department's McNeil Generating Station. The steel springs are trucked to All Metals Recycling in Williston.

Costa studied marketing at Champlain College and spent a year playing with the Vietnamese national basketball team on his way to becoming a mattress recycler. A job at a junk removal company confirmed that his calling was finding ways to reduce the waste stream.

Costa started Sleep Well Recycling with his brother, a college student. It took off quickly after he posted on Facebook that he was looking for mattresses; the Lodge at Spruce Peak in Stowe sent 900 of them in the first week. He expects to recycle 10,000 mattresses this year.

For Costa, the beauty of mattress recycling lies in the reuse of something that consumes an extraordinarily large amount of landfill space.

"They are just big old voids in the pile of garbage," he said of mattresses. "They sometimes ride a wave of methane to the surface, and make the whole thing wobbly, or they get stuck in loaders. They are a pain in the butt."

Residential customers can drop off their mattresses at Sleep Well six days a week for $20 to $30, depending on size. Most of Costa's business comes from furniture companies that pick up old mattresses when they deliver new ones; Champlain Housing Trust, which owns and manages rental housing; and local colleges and hotels. In May, he signed a contract to take mattresses from the Chittenden Solid Waste District. His goal is to be recycling every discarded mattress and box spring in New England by 2024.

"Someone's trash really can be a treasure if you know what you are looking for," Costa said. "Keeping it out of the landfill has always been an exciting proposition for me." 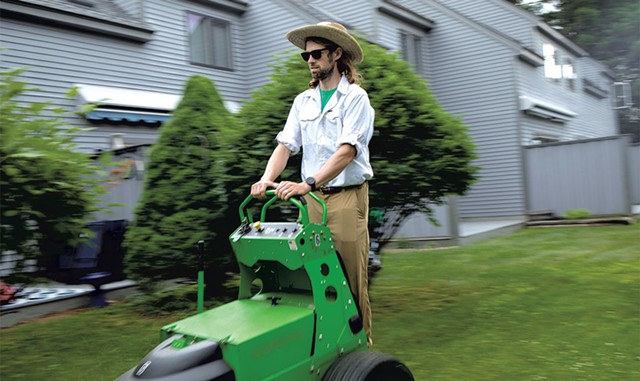 Matt Stuart likes to think of a lawn as a habitat that deserves intention and respect — not just a place to be flattened and planted with grass.

Stuart and his crew of about 10 are using six electric lawn mowers this summer to trim 250 lawns in the Upper Valley. The mowers are much more expensive than their gas counterparts — about $22,000 compared to $10,000 — but Stuart said the payoff comes in the form of noise reduction and air quality.

His customers appreciate the difference, and he said they're willing to pay 20 percent more for the services of his company, Electric Lawn. He appreciates it, too, because it fits into his background as a gardener and steward of the land. Stuart and his wife — who runs a gardening business — have an off-grid home and small farm where they have offered composting services to local restaurants and hosted other organic farmers.

Starting his two-year-old lawn mowing business and eschewing all fossil fuel-powered lawn machinery is an extension of that work, he said.

"We're not blowing through a lawn going Mach 3 and weed-whacking through peoples' nice edges," he said. "We're very intentional."

4: The percentage of women working in the trades, outside of administrative jobs, in Vermont. The statewide figure mirrors the national rate.

24: The percentage of Black households in Vermont that own their home. For white households, it's about 72 percent.

62K: The number of vacant homes in Vermont in April 2020, which equates to 19 percent of the available housing stock. The Census Bureau defines these as homes not occupied by a full-time renter or owner. Homes used as short-term rentals, homes listed for sale and seasonal homes are considered vacant. Maine and Vermont have the highest percentage of such homes in the country.

Correction: July 8, 2022: This story has been updated to reflect that the photo of realtor Mike Hickey was taken in Waterbury Center.