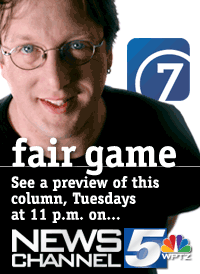 Just a few shopping days left until November 2. Are you sold yet on Vermont’s next governor?

With 13 debates behind them — the last a live, hour-long whine-and-moan fest on WCAX-TV on Saturday night — Republican Brian Dubie and Democrat Peter Shumlin will spend this week appealing directly to voters. No shared stages, no joint forums — just two dudes running for governor.

Expect Shumlin to bring home the daily newspaper endorsements; the Burlington Free Press and Bennington Banner have already backed him. The Freeps was a bit of a surprise, as it’s been a solid Jim Douglas backer in the past. The conservative-leaning Caledonian-Record and St. Albans Messenger backed Dubie. No surprises there.

Do these endorsements matter? They’re definitely a factor, especially for the undecided voters, who make up 8 to 10 percent of the electorate. And since this contest will be a race to the finish, every little bit helps … someone.

If the election were held today, I think Dubie would win by a nose. Why? His door-to-door campaign outreach to 75,000 homes was truly impressive, and he’s done just enough damage to Shumlin’s character to raise doubts among those last-minute, undecided shoppers, er, voters.

That said, Shumlin has proved he’s a formidable “closer” — he pulled it off in the Democratic primary. And he’s got all the momentum right now. The higher the turnout, the better it’ll be for Shumlin. Ditto for Dems who have launched a massive get-out-the-vote effort. Democrats want the gov’s seat back — bad.

If the Dems were looking for a fighter who wouldn’t roll over when the GOP played rough, they found it in Shumlin. He relishes the rough-and-tumble game of politics, aggressively contrasting and critiquing Dubie’s record the way Douglas has done with legislative Democrats.

Shumlin may have hit back too hard at times. It was silly and crass to depict Dubie as Pinocchio, in an effort to draw attention to his campaign-trail lies. Shumlin now bears partial responsibility for the negative tone of the campaign.

But Dubie set new lows in terms of fear mongering and inaccuracy with his TV attacks on Shumlin’s character and a campaign website with the URL shumlinsethics.com. It seems so long ago that Dubie told a crowd of supporters at his campaign kickoff: “We are committed 100 percent to running the most positive and strong campaign that this state has ever seen.”

Dubie’s personal attacks on Shumlin may have hurt Dubie more than they have Shumlin. Will voters remember Dubie being petty or Shumlin being “slick”? We’ll find out on election day.

Brian Dubie has made Peter Shumlin’s character a major issue in this governor’s campaign, even making it the focus of his questions to Shumlin in their last televised debate.

Yet, when pressed, Dubie never has the cojones to say Shumlin is “unethical.” Instead, he’s letting his website do the talking.

“Shumlin acknowledged having a conversation with the union president about ‘taking care of’ the ticket. Though Shumlin claims the trooper was joking, it is clear by his actions he was not,” the Dubie camp stated in its original missive.

The Dubie folks have even called on O’Neil and Shumlin to hold a joint press conference to clear the air.

The attacks on O’Neil upset members of the Professional Fire Fighters of Vermont — a union that endorsed Dubie. In fact, the firefighters were rumored to be thinking about retracting their endorsement.

The item about O’Neil has been removed from Dubie’s website.

Interesting. The Dubie camp pulled an item complaining about an alleged quid pro quo between a union official and Shumlin because they were worried they might lose the support of a key union?

That’s the (Down) Ticket!

In case you missed it, there are a number of other statewide races on the ballot next week. This is how I think they’ll turn out:

Lieutenant Governor: Republican Phil Scott will win by a comfortable margin over Democrat Steve Howard, Progressive Marjorie Power, Socialist Boots Wardinski and Independent Peter Garritano. Scott has maintained himself as a steady-hand-on-the-wheel kinda guy, and I suspect he’ll take enough left-leaning votes from the other four candidates to allow the race-car-driver-cum-politician grab the checkered flag.

Secretary of State: Republican Jason Gibbs has set the tone of this campaign — starting back in the primary — and has been relentless on the campaign trail. I give him the edge over Democrat Jim Condos, who hasn’t exactly been a fireball in debates. Expect Vermonters to “go with Gibbs.”

Auditor: I thought Republican Tom Salmon had this one in the bag, but his challenger — political newcomer Doug Hoffer, who is running as a Democrat-Progressive — has made this a very competitive race. With a strong showing in a VPR poll and a Burlington Free Press endorsement, Hoffer is holding his own. It’ll be upstream all the way for Salmon, but he’ll net a win in the end.

Attorney General Bill Sorrell and Treasurer Jeb Spaulding should have no problems with their various challengers, though I suspect both Progressives will earn at least 5 percent of the vote, which will help the Progs retain “major” party status in Vermont.

Can the Loser Win?

If none of the candidates in statewide races wins an outright majority — as in 50 percent plus one vote — the Democratic legislature will officially elect someone. Each lawmaker — in the House and Senate — gets one vote.

That’s what happened in 2002 when a Democratic-led legislature chose Gov. Jim Douglas, a Republican, over Democrat Doug Racine.

History could repeat itself if Dubie bests Shumlin in the popular vote but falls short of the 50 percent threshold.

The 2002 vote was the 22nd time in state history the legislature decided the outcome of an election. In that time, it’s only picked two “loser” gubernatorial candidates, notes Vermont State Archivist Gregory Sanford.

In 1789 the state’s first governor, Thomas Chittenden, was up for reelection. He won 44 percent of the vote and his chief opponent, Moses Robinson, won 26 percent. Robinson got the job because Chittenden had reacted negatively to early Revolutionary War leaders. Sanford also mentioned a “questionable land grant” deal.

In 1853, incumbent Gov. Erastus Fairbanks received 44 percent of the vote, while his chief challenger, John Robinson, received 38 percent. The legislature picked the loser because Fairbanks was a big temperance supporter.

Turns out the new leak reported at Vermont Yankee isn’t new at all. “Fair Game” discovered that Entergy Vermont Yankee reported the leak in late September to the U.S. Nuclear Regulatory Commission and the Vermont Department of Public Service. Entergy has since tried to fix it — twice.

The ongoing leak is described as wisps of steam from a drain line on a safety-related system that is designed to pump hundreds of gallons of water a minute into the reactor at very high pressure to keep it cool during an emergency shutdown. Even so, the NRC deemed the leak “of low safety significance” because the overall system could, theoretically, still work properly, said Neil Sheehan, an NRC spokesman.

DPS officials waited until the media was snooping around to inform their counterparts at the Vermont Department of Health.

In an after-hours email to several DOH officials on October 20, Uldis Vanags, the state’s nuclear engineer, alerted them that he had received word “that there may be a story in the papers tomorrow about another ‘crack’ at Vermont Yankee.”

Vanags first learned of the leak on or about September 27, he told “Fair Game.”

Using O’Brien’s definition, I guess it’s “responsible” to keep the public in the dark about a safety-related leak at Vermont Yankee?

Juan Williams isn’t the only public radio commentator who’s gotten into trouble lately. Williams was fired for discussing his fear of flying — with Muslims — on FOX News.

In Vermont, a different story has come to light: Commentator Willem Lange’s voice will be off Vermont Public Radio until after November 2.

Betty Smith-Mastaler, VPR’s commentary-series producer, explained in an email: “VPR has a long-standing policy of asking commentators who become directly involved in a campaign to take a leave. We want to make sure that listeners view the commentary series as balanced and uninfluenced by one political campaign or another. So we decided, after talking with Willem, to be extra careful and to resume airing Willem’s commentaries after the election.”

The same thing happened back in August, when Lange narrated an entire 30-second ad during the primary for Matt Dunne.

The Seven Days news team will provide election-day coverage next Tuesday night for as long as it takes to find out who the next governor will be. Or 3 a.m. — whichever comes first. Check out Blurt for ongoing staff coverage by myself, Andy Bromage, Ken Picard, Cathy Resmer and others.

Seven Days will host a live blog as results trickle in. We’ll also be partnering with the good folks at Channel 17 to provide the fastest results in Chittenden County.