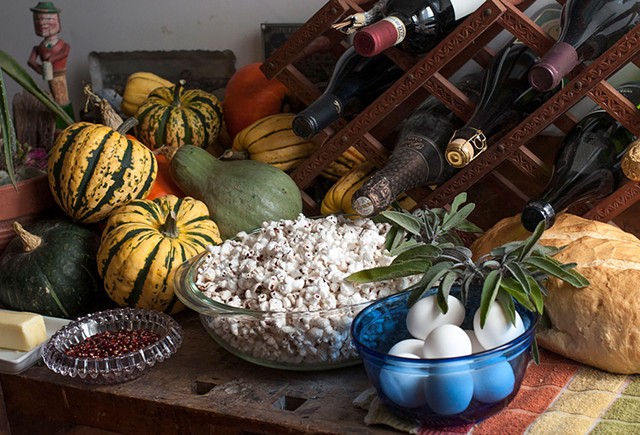 Last week, Suzanne Podhaizer offered tips and tricks — gleaned from her years as chef-owner of Montpelier's Salt restaurant — to help holiday hosts minimize their pre-feast stress. But in most families, preparing Thanksgiving dinner takes a village. Grandma knows she can count on Aunt Anne to bring the bean casserole, while sister Kristine invariably supplies the pies.

While hosts inevitably do most of the heavy lifting, those of us who sup at someone else's abode must often do a little legwork, too. Maybe you've been asked to contribute a predinner snack or side dish; perhaps you're responsible for salad, dessert or bread. But maybe you missed the memo until now. Or perhaps you put off preparing anything in favor of banging out your workweek in three days.

Whatever the reason for your holiday food emergency, we're here to help. Below are five feast-y saves, ranging in complexity from fancy popcorn to easy bread pudding, which you can prep in half an hour or less.

Depending on the breadth of your pantry, you may even be able to make most of them without hitting the store first. How's that for holiday spirit?

Adapted from The Vermont Beekeeper's Cookbook

Beat 12 egg whites, drizzle with ¼ cup honey and reserve. In a separate bowl, beat 12 egg yolks, ⅔ cup honey and ¼ teaspoon salt until very light. In a third bowl, mix 1 quart heavy cream, 1 quart milk and 1 quart bourbon, brandy or rum. Combine the contents of the three bowls and stir until smooth; pour into a gallon jug and keep cold. Sprinkle with nutmeg to serve.

Pop enough corn to feed your party (½ cup of unpopped kernels should suffice for five to six people) and place in a large bowl. For each batch, melt 3 or 4 tablespoons of butter over medium heat, until the butter clarifies. Add 3 or 4 fresh sage leaves and brown, stirring often, until butter darkens to an amber color and the sage leaves crisp up. Remove leaves and set aside to cool. If you'd like, add a couple tablespoons of maple syrup or honey after removing the sage, then heat up to 30 seconds more to combine and reduce. Drizzle butter over popcorn, stirring vigorously as you do. Place in a paper bag and dust with finely ground sea salt (½ teaspoon to 1 teaspoon per batch, to taste) and shake until the salt is distributed throughout. Crumble the sage, add to bag and shake again. Transfer to a bowl to serve.

Here's something to counter the heaviness of a Thanksgiving meal. Combine crème fraîche (or a blend of cream cheese and plain yogurt), smoked trout and scallions. Start with a 2-to-1 ratio of dairy to fish, then add more of either until you're pleased with the flavor and consistency. Add 1 chopped scallion per cup of dairy, then add salt and pepper to taste. Scoop into endive boats or romaine hearts and top with fresh, thinly sliced radishes.

On the Side: Salty-Sweet Winter Squash

For every person you need to serve, you'll need a fist-size portion of winter squash — two medium delicata or one large butternut, buttercup or red kuri will feed four to six people. Preheat oven to 425 degrees Fahrenheit. Split the squash in half and scoop out the seeds. Place a hefty pat of butter or coconut oil in the cavity of each squash, plus half a cup or more of maple syrup. Place cavity-side up in a baking pan and bake 30-45 minutes or until squash softens. (Large Hubbards or butternuts may take longer.) Allow to cool, then scoop the flesh away from the skin and into a large bowl. Mash until the squash reaches mashed-potato consistency, then add salt, more butter and maple to taste.

Preheat oven to 325 degrees Fahrenheit and coat a 2-quart baking dish with nonstick cooking spray or vegetable shortening. In a large bowl, whisk 1 cup maple syrup, ¾ cup milk, ½ cup half-and-half, 6 eggs, 1 teaspoon vanilla extract and ½ teaspoon salt. Add 8 cups cubed bread (crusts removed) plus 1 cup soft, chopped dates (pitted). Stir to combine, breaking up clumps of dates. Transfer to the baking dish, cover with foil and bake 45-50 minutes or until the center starts to puff. Remove foil and sprinkle with 1 teaspoon of turbinado (raw) sugar (optional). Increase heat to 350 and bake another 15 minutes or so until the top is golden and crusty. Cool 20 minutes before serving.

Short on time? Prep the pudding at home, then bake it at your host's place during dinner — provided there's space in the oven.

Jeffersonville: The Farm Store
In mid-October, this market moved to a new space at 168 Main Street, just up the street from its former address. Though awaiting permits for its commercial kitchen, the shop is well stocked with Vermont cheeses and meats to populate a last-ditch appetizer spread. It's also abundant in pies, dinner rolls and breads from Eastman's Bakery in Fairfax and gluten-free choices from Jeffersonville's Aunt Kaky's Kitchen. Traditional fillings include pumpkin and apple, while peach-raspberry, caramel-nut and chocolate cream round out the more unusual offerings. Pies, $14-20.