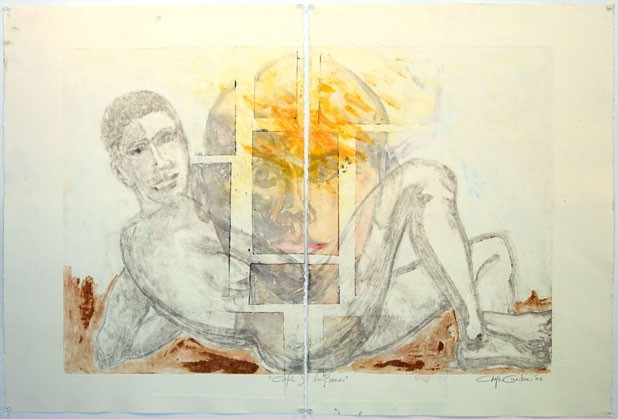 The walls of the headquarters of the South End Arts and Business Association (SEABA) double as a modest gallery space. Since SEABA puts on the annual South End Art Hop, offering its office for art shows year round makes perfect sense. The April/May show, "Fragmented Figure," is a group of airy, predominantly figurative monoprints by St. Albans Artists' Guild member Chepe Cuadra. Cuadra's work exhibits great spontaneity as he cobbles together multi-sheet prints into large-scale images. The largest is his "Creation of Venus," a 30-by-66-inch representation of the "Venus of Willendorf."

The actual "Venus of Willendorf" is less than 5 inches tall, so Cuadra's giant 5-and-a-half-foot-tall version is a little ironic. But irony isn't the main point. Cuadra seems to be commenting on the towering importance of the statuette, one of several Paleolithic "goddess" objects discovered in Europe over the last hundred years. The image is a monotype, with dry-point etching elements. Heavy black lines over three 22-by-30-inch vertically stacked sheets describe the fecund figure's swollen breasts and round belly. A more naturalistic, ghost-like figure, which appears to have been stamped on, adds another layer of reality to the "Creation of Venus."

A dialogue between primary forms often appears in Cuadra's imagery. The playfully entitled monotype "La Rana y Chepe" also features two overlapped figures. It's ostensibly an abstract self-portrait of Cuadra and his wife. SEABA Executive Director Carlos Haas said in conversation that Cuadra's title, "La Rana," which means "the frog" in Spanish, reminds him of Frida Kahlo's affectionate use of the word sapo ("toad") in her portraits of Diego Rivera. Who is who in Cuadra's 30-by-44-inch print is somewhat ambiguous, but the broad face, printed over a reclining figure, may be the artist's. The figure, like a Meso-American Chac-Mool statue, seems more spiritual than physical. Cuadra printed the figures in a light silvery gray and applied a patch of yellow ocher over the large, looming head. Burnt-sienna patches read like soil under the reclining figure. Two 30-by-22-inch sheets, arranged horizontally, account for the artwork's size.

The 20-by-26-inch "Resting in Pink" subtly portrays the back of a resting nude female, horizontally organized in four plates on one sheet of paper. Cuadra combines dry-point intaglio with the collograph relief printing process in the composition, and the picture is light and ethereal.

The artist's presentation of the pieces is also informal: Most are simply pinned to the office walls. But that direct offering adds to their ephemeral character. Cuadra's most understated images, exemplified by "Resting in Pink," have an air of transience that can draw viewers in, provided they don't find his lack of ceremony off-putting.

"Broken Male," by contrast, is as dynamic as "Resting in Pink" is delicate. Cuadra is originally from Nicaragua, and "Broken Male" has an almost revolutionary bright red background, while a gaunt vertical male nude boldly appears in wide black strokes over white. Three sheets of paper make up the 22-by-37.5-inch compound image. Cuadra integrated woodcut, monotype and silkscreen passages to bring the iconic figure to life.

The single sculptural piece in the exhibition is "Fragmented Goddess." Three islands of glazed red terra cotta on black paper make up the 16-by-20-by-3-inch piece. It's a flat and frontal sculpture, with chunky forms and scarce details indicating a nude that seems to be emerging from a dark void.

The SEABA office and gallery are off the beaten path, in an old industrial complex on Flynn Avenue. But, as "Fragmented Figure" demonstrates, the space is well worth seeking out. Cuadra's show is a great reason to discover the venue. His personal aesthetic draws on diverse historical resources, and a unique style of abstract figuration emerges.