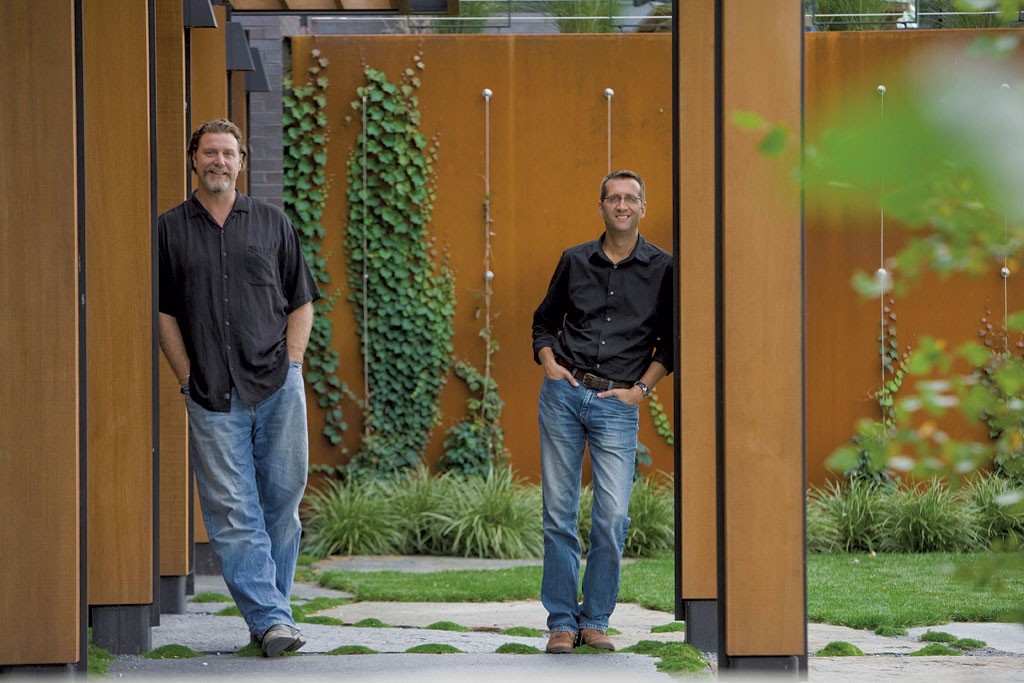 If you've been around northern Vermont in the past 10 years, you've seen the work of H. Keith Wagner and Jeffrey Hodgson. The duo's eponymous Burlington-based landscape-architecture firm has worked on highly trafficked sites such as Jay Peak Resort, the University of Vermont's Dudley H. Davis Center, Dealer.com, Fletcher Allen Health Care, the Winooski rotary, the Shelburne Museum's Pizzagalli Center for Art and Education, and the ECHO Lake Aquarium and Science Center, to name a few.

The firm also works on residential homes, using a signature modern-but-natural touch. Wagner and Hodgson's aesthetic combines clean, bold lines in natural rock or other hardscape material with textured plant drifts. The landscape architects say that every home, regardless of size or location, can be landscaped to maximize its comfort and beauty; they work with accounts that range from $10,000 to $1 million. The key in all instances, in their opinion, is to pare down.

"The landscapes that Jeff and I are trying to create are calming," Wagner says. "The world is hectic enough. When you come home, it would just be nice to have an ahhh moment. You just enjoy it. There's not a lot of clutter; nothing's going on. It's just very calming."

Hodgson and Wagner first teamed up 11 years ago, after a mutual architect friend introduced them. They shared a love for natural and native materials, and a similar design sensibility. "That was a good chemistry, so I said, 'Hey, how about we become partners?'" Wagner remembers. That chemistry has clearly survived the years — when we sat down with the two at their Marble Avenue office, they frequently finished each other's sentences.

The work in their portfolio suggests that the word "minimalist" only hints at the combined aesthetic that's earned Wagner Hodgson its elegant reputation. "It's definitely modern," Wagner allows. "But 'minimalist' kind of indicates that the site would be void of richness. We use stone walls, plant material, textures and colors that make it feel, give it the warmth. So the maneuvers are all very clean and modern and minimal, but there's a tactile and a sensory experience because of the richness of materials." 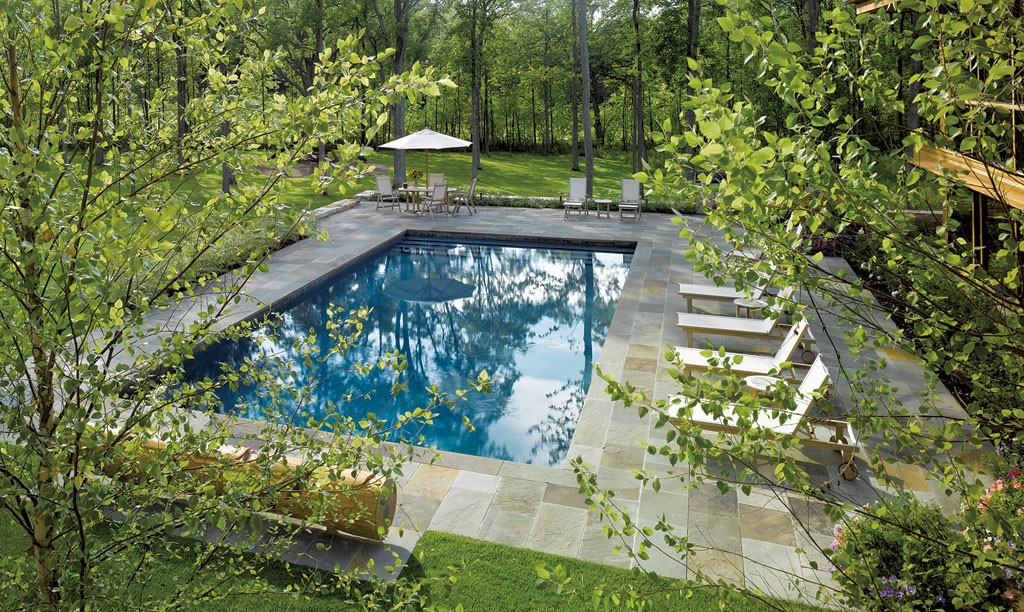 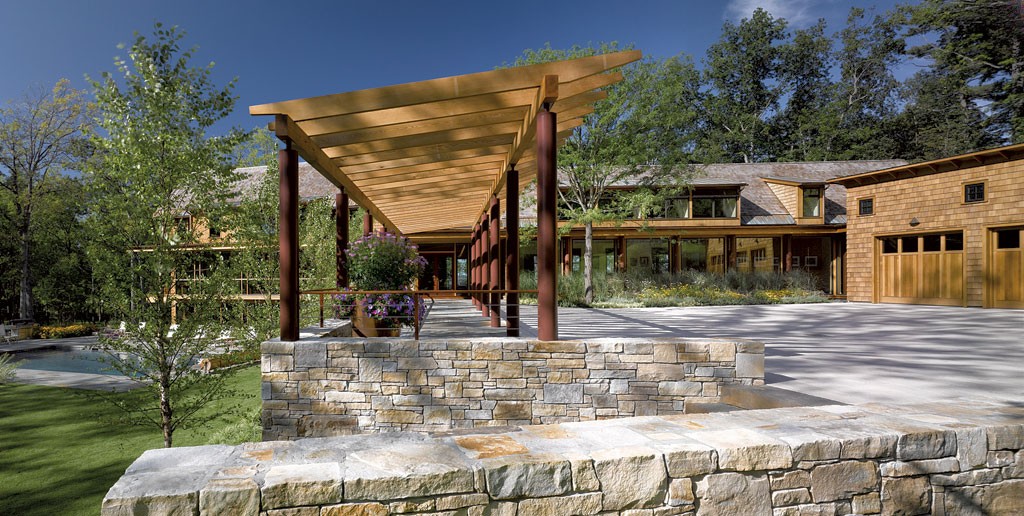 What exactly does a landscape architect do? When it comes to homes, Hodgson and Wagner say, the answer is a little bit of everything. "We're trained in grading and drainage and road layouts," explains Wagner. "We have the skills of a civil engineer, the plant-material skills of a horticulturalist, the structural skills of an architect. And then we have the appreciation for the arts."

Wagner and Hodgson orchestrate the "big picture" of a site's design, bridging the gap between indoors and outdoors. Trees may be clipped on the grounds to maximize an architectural feature such as large windows, while outdoor living spaces such as big rocks or a patio may be landscaped in.

Wagner and Hodgson aim to make the transitions seamless from indoors to outdoors. For instance, an interior cement floor might be extended to an outdoor patio floor of the same material, creating a visual cue that the home extends beyond its walls. "It's taking the geometric lines of what the architecture is doing ... into the landscape and blurring that line where one ends," Wagner says.

"That was popular out west in the 1940s and '50s," Hodgson adds. "But I think, due to the history in New England and the weather, it's only now that the rest of the country is discovering how to blur the lines between indoors and outdoors."

Why create a gorgeous outdoor area in Vermont, which can be cold seven months of the year?

"I love having seasonal aspects to a design, because it's something to celebrate in the spring," Hodgson says.

"You should celebrate it!" Wagner adds.

Examples abound in their portfolio: A hilltop cabin in Stowe has a bluestone interior extending to a pool patio, which is rimmed with perennials that draw the eye to mountain ridgelines beyond. An extensive, multistructure project in Charlotte, with views of the Adirondacks and Lake Champlain, features native stones so as not to compete with the scenery.

Using native materials is Wagner Hodgson's preferred tactic for keeping the viewer's eyes on natural scenic beauty. "It looks like what was naturally on the site got organized a little better," explains Hodgson, stressing that the firm always goes with a "less is more" philosophy. Natural foliage is also easier to maintain: Plants do better in their native environments.

For an urban dweller — or anyone on a small parcel of land — who wants to create a Wagner Hodgson-esque ahhh moment, keeping things simple is absolutely key. "It's even more critical when there's less space," says Hodgson. "How you utilize every square inch [matters]."

Often, they say, a landscape architect will do more removing than adding to the landscape.

"A lot of times, I think people get blinded by their existing conditions," Hodgson says. "Then Keith and I will come along and say, 'What do you think about removing these trees?' They're always so shocked that a landscape architect would suggest removing trees."

"Editing," Wagner interjects, "is an important part of creating art."

The original print version of this article was headlined "Beyond Lawn"